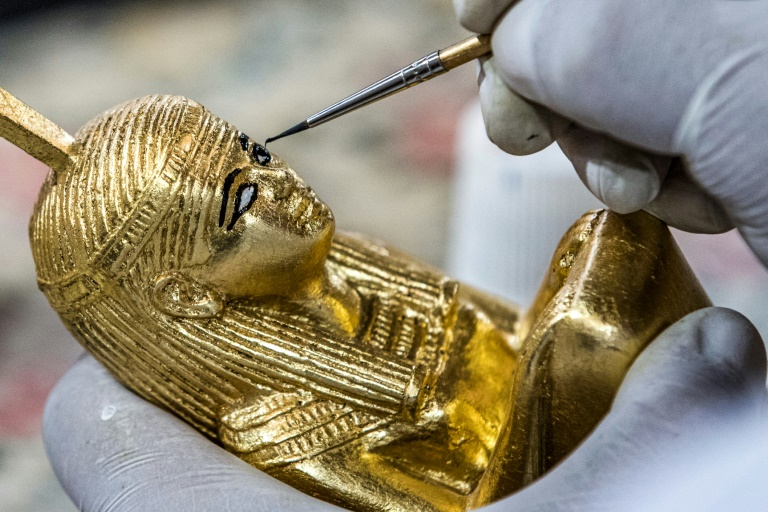 A technician paints a replica of an ancient Egyptian statue at the Konouz (Treasures) factory in Cairo. AFP/Khaled Desouki

CAIRO - Pyramids, Tutankhamun masks, Nefertiti busts -- Egypt's souvenir-makers are pinning their hopes on a new lease of economic life after tourism was battered by the coronavirus pandemic.

In the shadow of the magnificent Giza Pyramids, Eid Yousri manufactures polyester Pharaonic figurines from a humble workshop erected on the roof of his family home.

Hundreds of small business owners and artisans have been forced to mothball much of their activity, choked by cancelled flights and movement restrictions around the world.

Around 500,000 have flown in monthly since April this year, more than double the number in January and up from an average of just 200,000 tourists per month in 2020.

In a souvenir market that was for many years flooded by cheap Chinese imports, the government is seeking to meet demand for quality products sought out by tourists.

On the eastern outskirts of Cairo, a new antique reproduction factory has since March been preparing to capitalise on the much hoped for post-pandemic era.

READ: March of the Mummies: Egypt readies for Pharaohs' Parade

Reproductions, in 1:1 scale or miniaturised, are accompanied by an official government-issued certificate of authenticity.

The vast 10,000 square metre factory is run by Hisham Sharawi, a retired general, who supervises around 150 workers, painters, cabinetmakers, sculptors and designers.

Most of the factory's replica objects are cast in polyester, plaster or metal. Specialised machines give a "final touch" to the replicas before they are painted by hand or covered with gold leaf.