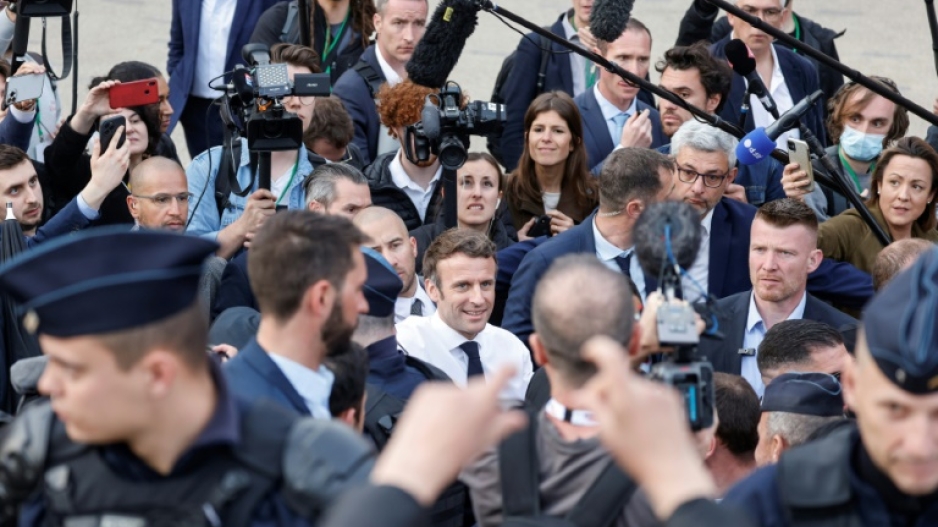 PARIS - Less than two weeks from presidential elections for which he has barely started to campaign, French leader Emmanuel Macron is under fire over his government's liberal use of public money on expensive management consultants.

Faced with opponents who sense an opportunity in recent revelations about record contracts handed out in 2021, Macron has been forced to defend bringing in companies such as US-based giant McKinsey to help the public sector.

READ: France's Macron hits back at rival over 'killer' chants

While Macron is still the overwhelming favourite to win a new term, the tensions come as indications grow the vote may yet be tighter than  assumed with the president distracted by Russia's invasion of Ukraine.

"You get the impression that there's something murky, but that's not true," Macron said at the weekend, urging anyone with evidence of wrong-doing to report it to authorities.

He argued that public procurement policies had been strictly followed and additional help had been required during the Covid-19 pandemic when ministries and civil servants were stretched thin.

Some of Macron's rivals are hinting at possible criminality, while others are focusing on what they see as irresponsible spending and overly cosy relations between the government and companies known for  high prices and cut-throat business advice.

"With me, consulting groups will be gone," hard-left candidate Jean-Luc Melenchon promised on Monday, while far-right leader Marine Le Pen's party has denounced a "state scandal".

Attention has focused in particular on McKinsey, whose eye-watering fees and tax policies have seen it join other US corporate bogeymen in France from the BlackRock investment group to Goldman Sachs or genetically modified seed maker Monsanto.

Behind the problems for  government was a Senate investigation  which concluded this month that public spending on consultants had more than doubled from 2018-2021, reaching more than a billion euros ($1.1 billion) last year, a record.

The investigation, which condemned the "sprawling phenomenon", also slammed McKinsey for failing to pay corporation tax for the last 10 years despite declaring sales of 329 million euros in France -- which McKinsey denies.

Other consultancies used by the government include France's Capgemini and Britain's EY.

The question for Macron is how much the issue will cut through to voters and affect his chances as the clear favourite for the two-stage election on 10-24 April.

The former investment banker, derided as a "president of the rich" by left-wingers throughout his time in office, has so far largely steered clear of the election campaign, focusing instead on his diplomatic efforts to end Russia's assault against Ukraine.

He faced questions from journalists during his first pre-election walkabout to meet voters in Dijon on Monday.

"They (the opposition) are trying to make it into the Bokassa diamond scandal for the president. It's not a real issue. Everyone uses consultancies," one close ally of the president told AFP on condition of anonymity.

Polls currently suggest Macron would easily win the first round if the vote were held today ahead of anti-immigration far-right leader Marine Le Pen, but she appears to be gaining momentum and is closing the gap.

One latest survey set off alarm bells in Macron's camp by showing her up three points in a week at 47 percent versus 53 percent for the president in a hypothetical run-off.

Macron will finally address a rally as candidate on Saturday in Paris, a key moment for his campaign.

"It's a complicated issue that will sway those who were already convinced that Macron is a 'president of the rich', but it's not a widespread issue," political analyst Philippe Moreau Chevrolet told AFP when asked about the consultancy revelations.

"It counts much less than questions around household income and spiralling inflation and even fears about food supplies," added Moreau Chevrolet, the founder of MCBG Conseil, a PR agency specialised in political communication.