Elsa strengthens to hurricane as it closes in on Florida 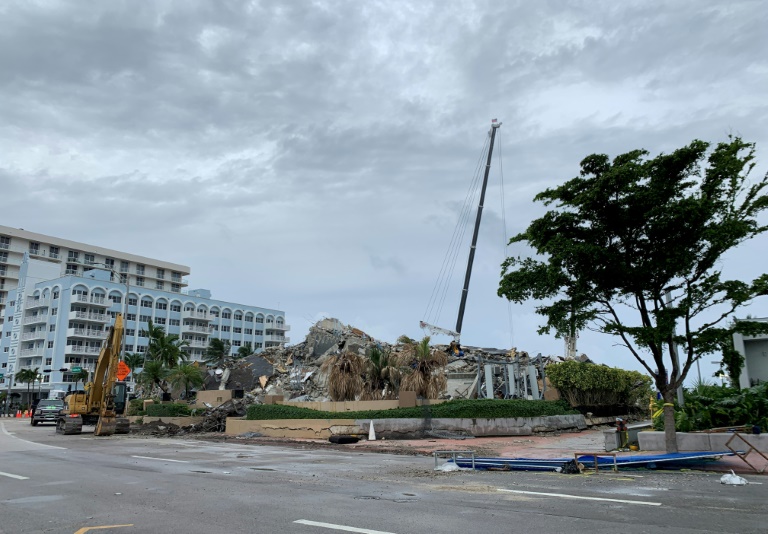 The rubble of the Champlain tower in Surfside, Florida as rescuers race to search the collapsed condo before Tropical Storm Elsa barrels closer. AFP/Eva Marie Uzcategui

MIAMI - After battering Cuba with drenching rain and strong winds, Elsa regained hurricane strength late Tuesday as it closed in on Florida, where rescue workers pressed on with their search of the debris of a Miami condominium that collapsed almost two weeks ago.

The US National Hurricane Center (NHC) said Elsa had maximum sustained winds of 120km/h and was just offshore the Tampa Bay area, with "heavy rains and gusty winds spreading inland across southwest and west-central Florida."

After making landfall on the Florida coast it is expected to move inland into the southeastern United States on Thursday, the NHC said.

With a possible storm surge of up to 1.5m, Tampa airport suspended commercial flights from 5pm Tuesday until at least 10am Wednesday local time.

Florida Lieutenant Governor Jeanette Nunez called on state residents to start preparing for the storm, including the possibility of power blackouts and asked people to stockpile adequate supplies of food and water.

"If you are asked to evacuate, please leave," she said, reminding people that there were emergency shelters ready to accommodate them.

Elsa left a trail of destruction through the Caribbean, claiming at least three lives. It was logged as the first hurricane of this year's Atlantic season on Friday before being downgraded Saturday to a tropical storm again -- and then back up to a hurricane Tuesday.

Over 100,000 people were evacuated from coastal or low-lying areas as the storm cut through Cuba, with the nation's meteorological institute Insmet reporting winds of up to 100km/h.

But its forecasted westward path meant Florida appeared set to avoid the worst of the storm, with the southwest coast of the state set to experience a glancing blow rather than the direct hit expected earlier.