JOHANNESBURG - The hospital room is air-cooled to feel like a pangolin's burrow. The patient, Lumbi, is syringe-fed with a protein-packed smoothie, given a daily dose of medicine and has his vital signs checked.

Lumbi is being treated for a blood parasite after he was rescued from traffickers during a police sting in South Africa's northern Limpopo province late last year.

He and several other pangolins in the room are patients of Johannesburg Wildlife Veterinary Hospital, founded in 2016 to treat and rehabilitate indigenous wildlife.

They were confiscated from poachers in South Africa and neighbouring countries, including Namibia, Mozambique and Zimbabwe.

Many pangolins are in a horrendous state when they are rescued and need of medical care, after being kept in sacks and car boots for weeks with no food or water.

"It's like an ICU (intensive care unit) for pangolins," said Nicci Wright, the wildlife rehabilitation specialist attending to Lumbi.

The pangolins are kept at a secret site during treatment, which takes anything from weeks to months, before they can be released back into the wild.

Although pangolins have existed for around 80 million years, medically little is known about them.

"They are so different to other animals. They really are," said Wright, who has been working with pangolins since 2008.

Sometimes vets have to fiddle with various treatment regimes to provide the appropriate medication. 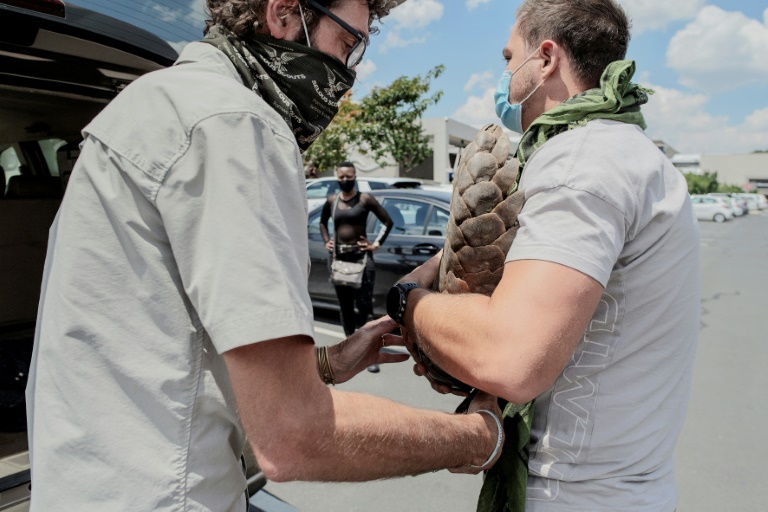 "The actual veterinary medicine and rehabilitation process hasn't been well documented and very little is actually know about the African species," said Wright.

Vets administer standard treatments used on other mammals such as cats and dogs. Often they work.

"Sometimes to you just have to take a chance, and so far we have taken chances and we have been very successful and they have responded very well," said vet Kelsey Skinner.

"It's just a leap of faith every time you try something," said Skinner, 30, after giving Lumbi his daily dose of meds.

Having cared for sick pangolins for several years, Skinner discovered that, like people, they have different personalities.

"They are like people. They have just the most unique little personalities. 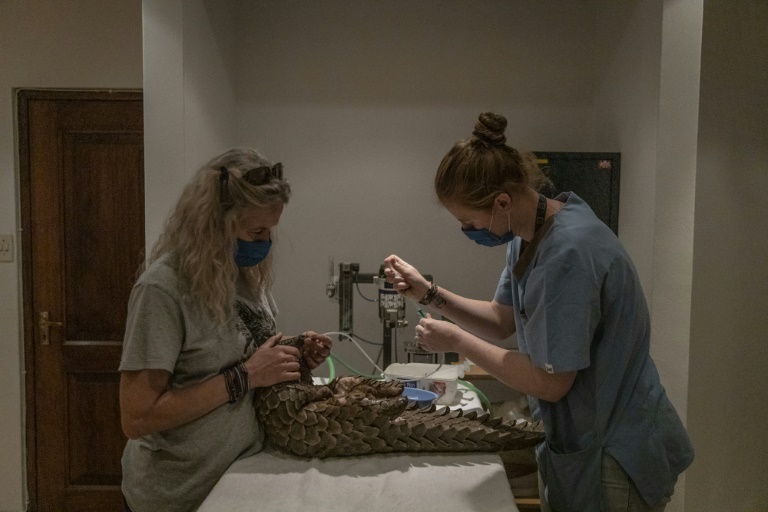 "Some of them are shy. They don't want to be touched. Others are very out there and play a lot in the mud. They are comedians," she said.

"The level of personalities is like dealing with a whole lot of different people. Everyone is just so unique."

The most trafficked mammals

Pangolins are believed to be the most trafficked mammals on earth.

They're prized for their scales - made of keratin, like human nails - which are used in Asia for their supposed medicinal properties. 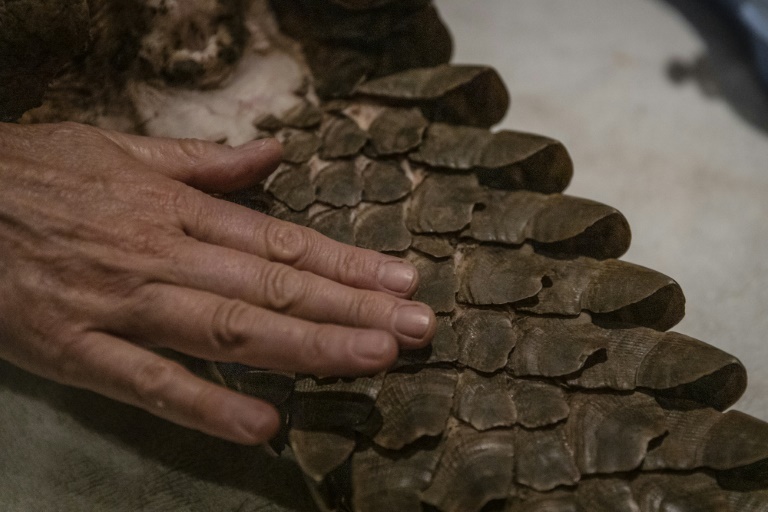 Pangolins are believed to be the most trafficked mammals. They're prized for their scales, which are used in Asia for their supposed medicinal properties.

Only found in the wild in Asia and Africa, their numbers are plummeting under pressure from poaching. Some species are listed by wildlife watchdogs as critically endangered.

It's not known how many pangolins are left on the planet.

The ward that now cares for Lumbi was also home, until recently, to a pangolin named Steve. Last month, Steve was released back into the wild, where he belongs, after making a full recovery. 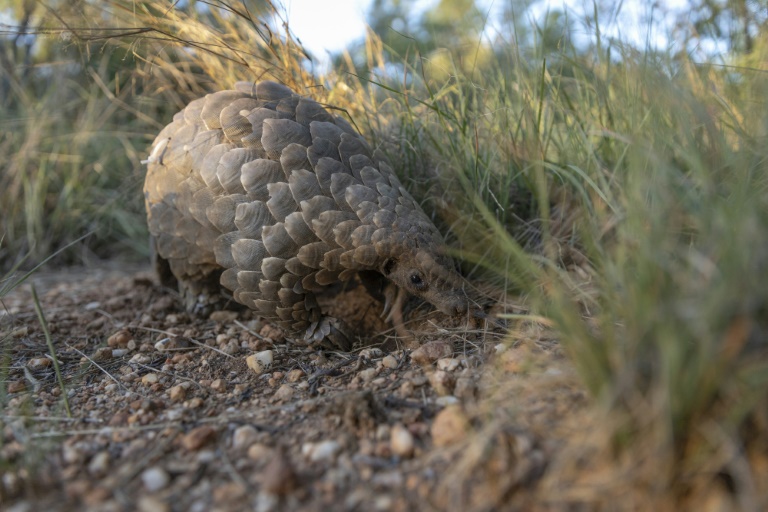 Gareth Thomas is a volunteer pangolin walker who walked Steve weekly during the seven months of preparation for his release.

"I've been with him since day one. I was there when he got pulled out of the box from the poachers," he said during one of their final walks before the release.

After a six-hour drive, Steve was set free into the vast 23,000-hectare Manyoni Game Reserve in southern KwaZulu-Natal province.

Pangolin monitor Donald Davies from Zululand Conservation Trust offloaded a specially designed crate from the van, with Steve inside and opened it. 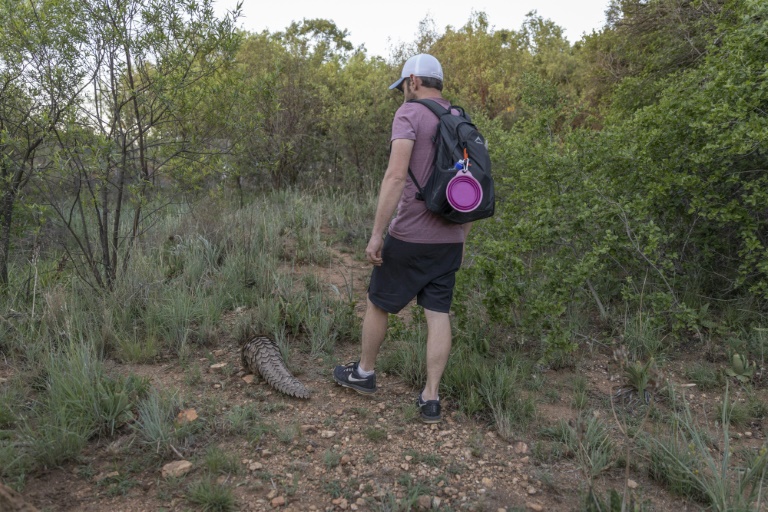 With two telemetry devices attached to his scales, the pangolin cautiously stepped out, sniffing around and casually walking away to find ants for an afternoon grub.

"He has all the skills he needs to survive in the wild now," said Davies.

Freeing them into the wild is a crucial process to ensure the endangered mammals survive after the huge investment poured into their treatment and rehabilitation.

"The release process is one of the most important, because it has to be done correctly," said Wright.

The gentle creatures can only be released into a relatively safe area, such as a well-patrolled private game reserve, to avoid them falling into the poachers' clutches again.