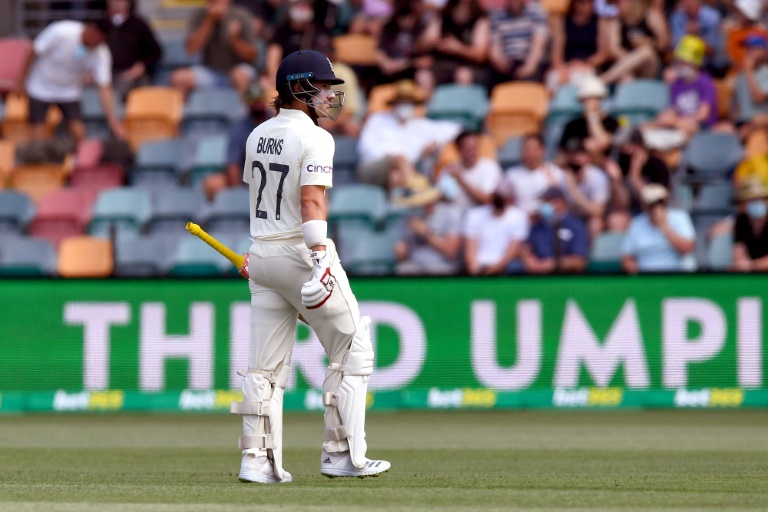 England batsman Rory Burns walks off after being run out

HOBART - England's hopes of salvaging anything from the Ashes were in tatters as they slumped to 124-6 on the second day of the fifth and final Test in Hobart on Saturday.

Replying to Australia's 303, England lost four wickets in the twilight session, including a horror stretch when Dawid Malan (25), Joe Root (34) and Ben Stokes (4) fell for the addition of just seven runs.

England have already lost the Ashes, down 3-0, and the batting frailties that have torpedoed their series were brutally exposed once again.

At the second break of the day-night Test, debutant wicketkeeper Sam Billings was not-out 19 and Chris Woakes, who was twice dropped in the slips, was on five.

After the hosts were dismissed for 303 midway through the first session, England had a disastrous start to their innings when recalled opener Rory Burns was run out for no score with just two runs on the board.

Fellow opener Zak Crawley knocked a ball in front of him and called for a quick single, but the much-maligned Burns was slow to react and Marnus Labuschagne's direct hit found him centimetres short of his ground.

Crawley, who scored a fine 77 in England's second innings in Sydney, again looked assured until on 18 he got an inside edge onto his pad off Australian captain Pat Cummins and Travis Head took a sharp catch at short leg to leave England 29-2.

Skipper Root joined Malan at the crease and the pair set about trying to rebuild the England innings.

Both men looked comfortable for the most part and were scoring freely, getting great reward for their shots on the lightning fast Bellerive Oval outfield.

However, Cummins brought himself back into the attack with immediate dividends when Malan tickled a ball down the leg side straight to wicketkeeper Alex Carey.

He then trapped Root lbw to leave England reeling at 81-4 and four runs later, Stokes slapped a short ball from Mitchell Starc to a diving Nathan Lyon at point.

The recalled Ollie Pope was next to go, edging Scott Boland to Carey for 14, but Billings and Woakes saw England safely to tea.

Australia had resumed on Saturday at 241-6 looking to take their score beyond 300.

This seemed unlikely when Mark Wood's bouncer barrage claimed Starc and Cummins, both caught trying to hook the English paceman.

Wood tried the same tactic against Lyon but with a vastly different result, the Australian number 10 smashing three massive sixes, one of which cleared the grandstand.

Carey's disappointing series continued when he played on to Woakes for 24, but Lyon and Boland continued to play their shots and took the score past 300.

Lyon was last man out, playing across the line to a Stuart Broad straight ball which clipped the off-bail.

Broad was the pick of the English attack, taking 3-59 off 24.4 quality overs while Wood also took three wickets, but he was very expensive, his 18 overs going for 115 runs at 6.3 an over.