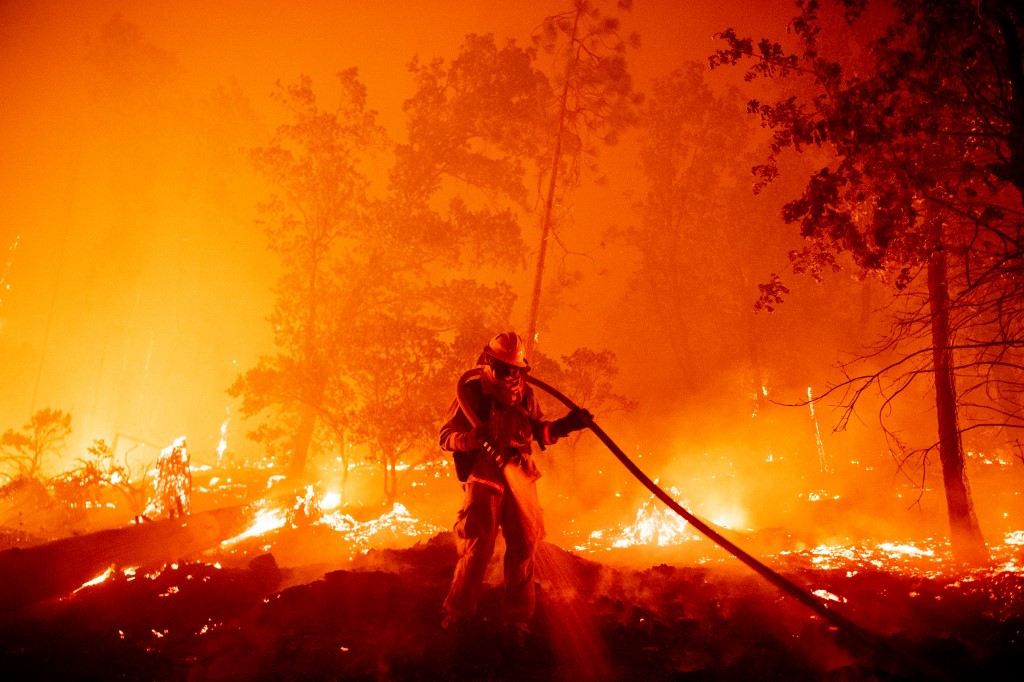 A firefighter douses flames as they push towards homes during the Creek fire in the Cascadel Woods area of unincorporated Madera County, California on September 7, 2020.

PARIS - There was a lower-than-average number of wildfires in 2020 despite hotspots such as California and Australia being hit by blazes of unprecedented intensity, the European Union's satellite monitoring service said Monday.

A year of data collected by the Copernicus Atmosphere Monitoring Service (CAMS) showed that carbon emissions from fires were set to be lower than previous years and that 2020 was one of the lowest years for active fires globally.

Despite this, it said that the worst affected areas had experienced above-average fire intensity, leading to roughly 1.7 billion tonnes of carbon pollution.

"While 2020 has certainly been a devastating year for wildfires in the most badly-affected hotspots, emissions across the world have been lower due to better fire management and mitigation measures," said Mark Parrington, senior scientist and wildfire expert at CAMS.

He said that globally fires had declined consistently since 2003 when the monitoring service began.

"However, this is no time to be complacent as wildfires in the worse affected areas were of record intensity as a result of warmer, drier conditions," Parrington added.

"This resulted in increased pollutants being carried thousands of miles, affecting air quality for millions of people."

CAMS said four areas were especially hard hit. In the western United States, data showed some of the most severe wildfire regions on record following abnormally hot and dry weather in August and September.

Smoke from fires in California, Oregon and Washington spread across the Atlantic Ocean as far as northern Europe -- releasing more than 30 megatonnes of carbon into the atmosphere.

Fires in the Arctic beat all previous annual emissions records as early as September, with emissions in the first nine months of 2020 topping 244 megatonnes, compared with 181 megatonnes for all of 2019.

The Caribbean was also badly hit, with record fire emissions in Guatemala and above-average emissions levels across the region.

And in Australia, fires of record-breaking intensity released some 400 million tonnes of carbon into the atmosphere, with the blazes producing smoke clouds large enough to cover Russia, CAMS, said.