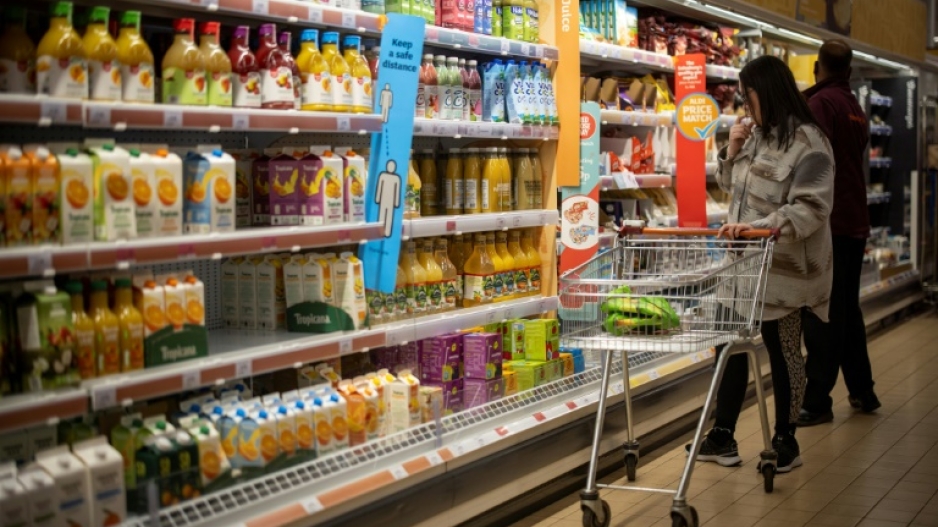 The news sent the pound sliding on fear that the cost-of-living crisis will spark a recession in Britain, in line with the Bank of England's recent forecast.

In the eurozone, Frankfurt equities flatlined and Paris also shed 0.1 percent in value.

"A recession is looking increasingly inevitable in the UK and other countries... if the inflation data does not improve.

"That does not bode well for equity markets."

The technical definition of a recession is two quarters of economic contraction in a row.

Investors remain on red alert over decades-high inflation, which has surged around the world as Russia's invasion of Ukraine fuels spiking energy and food prices.

That in turn has sparked interest rate hikes from major central banks including the Bank of England and the US Federal Reserve, as they seek to contain runaway prices.

The Fed's monetary policy tightening has sent jolts through markets this year, deepening the apprehension of investors already roiled by China's Covid-19 lockdowns and Russia's invasion of Ukraine.

But there was some good news out of the United States, with data showing increased spending by Americans in April. Retail sales rose 0.9 percent -- partly boosted by a rebound in auto purchases.

Fed Chair Jerome Powell said Tuesday that there needs to be "clear" evidence that US inflation is coming down before efforts to cool the economy can be pulled back.

And he acknowledged that it may be a "bumpy" ride that would inflict some pain.

The world's largest economy also faces the fastest inflation in around four decades, prompting the Fed to go to battle to try to cool price pressures.

It announced earlier this month the biggest interest rate increase since 2000.

Powell said policymakers agree another aggressive increase is "on the table" in June and July.