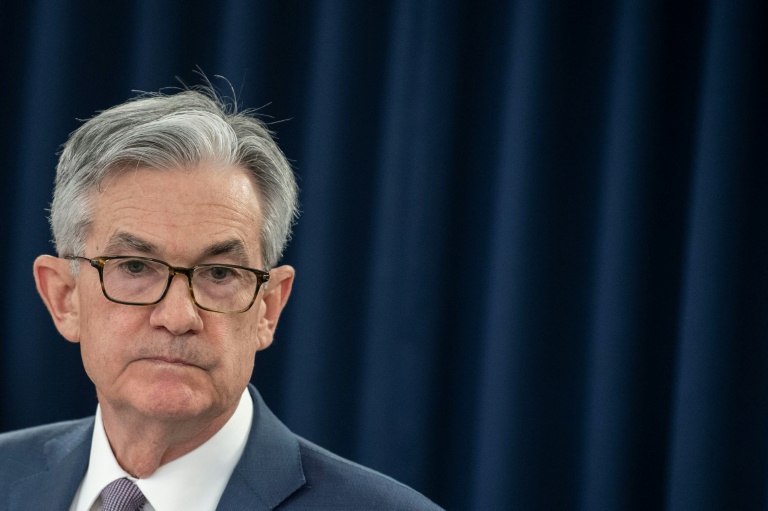 Investors will be keeping a close eye on comments from Fed boss Jerome Powell after the central bank brought forward its forecasts for lifting interest rates. AFP/Eric Baradat

LONDON - European equities mostly fell on Tuesday on lingering concern about the pace of expected US interest rate hikes, but London rose on the back of the weak pound, dealers said.

The dollar regained its composure somewhat before key testimony from US Federal Reserve chief Jerome Powell.

"With the exception of the FTSE, which is finding support from a weaker pound, European indices are back in the red," said OANDA analyst Sophie Griffiths.

"Concerns over the Fed reining in support for the economy and adopting a hawkish stance is once again unnerving investors."

Markets were sent into turmoil last week after the Fed brought forward its forecasts for hiking interest rates as it looks to prevent overheating in the US economy.

Powell is widely expected to shed more light on the monetary policy outlook.

In prepared remarks ahead of a House hearing Tuesday, Powell pledged again the bank's continued support to ensure the "sustained improvement" in the economy is extended.

Investors contemplated the US central bank's latest projections for hiking interest rates in light of the country's blockbuster economic recovery and sharp spike in inflation.

The Fed's "dot plot" forecast last week indicated liftoff in 2023 -- a year earlier than first flagged -- with some policymakers eyeing the end of 2022, while discussions on winding down its vast bond-buying programme are likely in the next few months.