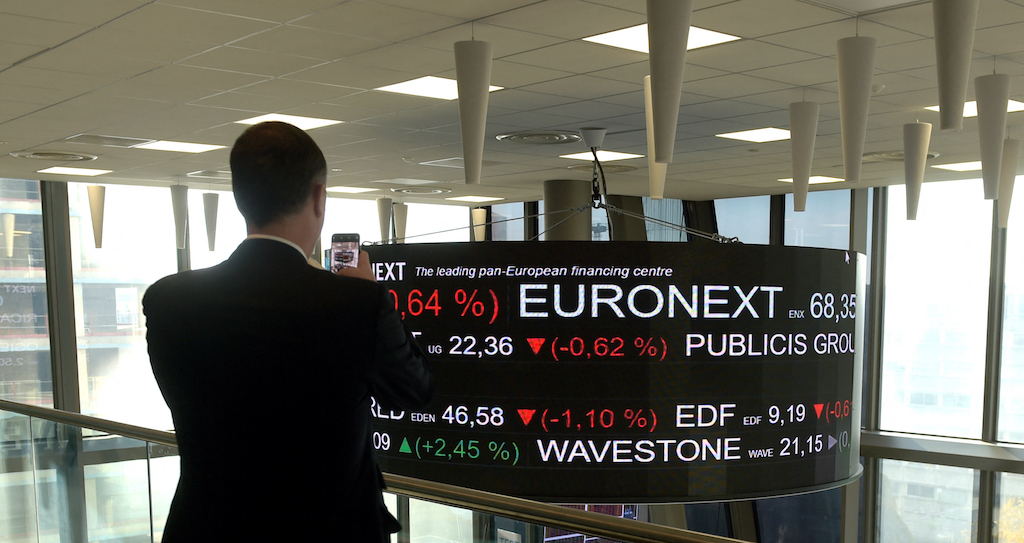 File: The stock tickers and financial display are pictured at the headquarters of the Pan-European stock exchange Euronext. AFP/Eric Piermont

A bigger-than-expected hike of 4.2 percent in consumer prices in April saw the Dow Jones index give up 1.3 percent two hours into trading amid fears of an about-face in Federal Reserve policy, while the tech-heavy Nasdaq lost 2.5 percent.

The larger-than-expected spike in US inflation last month "surprised" Federal Reserve Vice Chair Richard Clarida, but he said the central bank is ready to act if needed to contain prices.

However, the Fed continues to believe the sharp price increases over the past two months are due to the rebound following the unprecedented shock inflicted by the Covid-19 pandemic and will not last, he said.

"We've been saying for some time that reopening the economy would put some upward pressure on the price level.

"We have pent-up demand in the economy. It may take some time for supply to rise up to the level of demand," Clarida said.

The Fed insists that while it sees inflation spiking owing to the recovery and the low base of comparison last year, officials will not make any policy adjustments such as lifting interest rates yet.

"Although retailers do not need to worry too much about inflation impacting consumer spending, at least in the short-term, the jump in inflation is becoming a serious operational concern," said Neil Saunders, managing director of GlobalData.

The picture was moderately bright in Europe as London's benchmark FTSE 100 index added 0.9 percent after losing 2.5 percent Tuesday on inflation fears that continued to trouble most Asian equity markets Wednesday.

In foreign exchange, the dollar was higher against its main rivals, winning support from the prospect of tighter US interest rates sooner than expected because of high inflation.