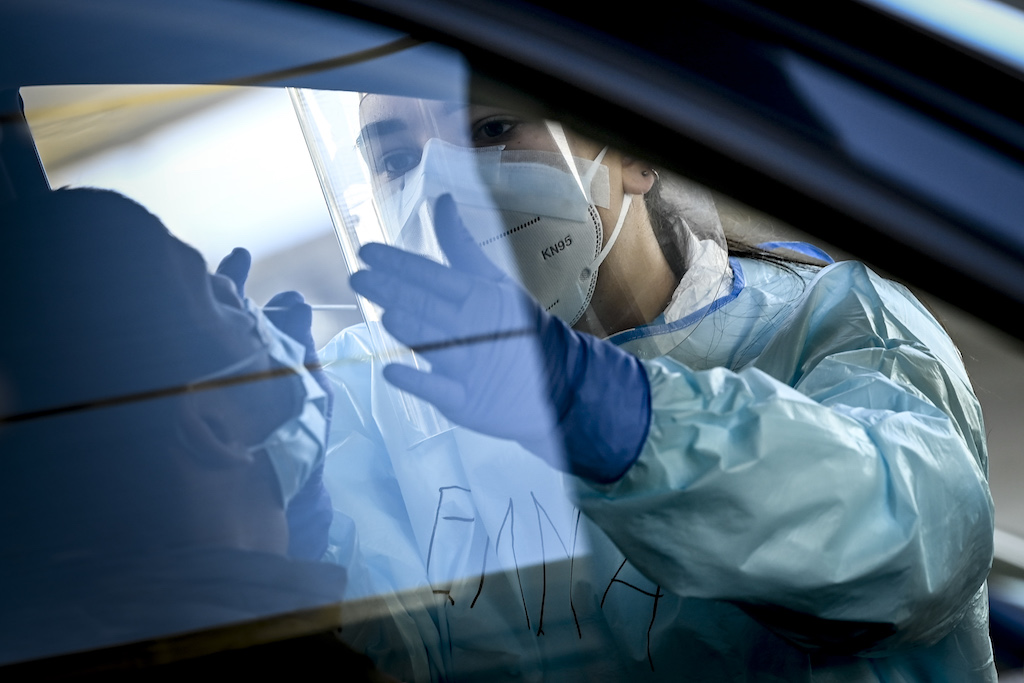 A medical staff member attends a driver in his vehicle at the COVID-19 testing facility on the Spoor Oost site in Antwerp, Belgium. AFP/Dirk Waem

PARIS - Europe passed a grim milestone after reporting more than 11 million coronavirus cases, as Austria and Greece became the latest countries on the continent to impose shutdowns.

Still reeling from a deadly shooting spree in the streets of Vienna on Monday evening, Austria went into partial lockdown while Greece shut down major cities.

They joined Belgium, France, Germany and Ireland in re-imposing tough curbs on people's lives in an echo of last spring as the virus that first emerged in China at the end of 2019 shows no sign of abating.

Europe has now registered 11,008,465 infections and almost 285,000 deaths according to an AFP tally of official sources on Tuesday.

The stringent new measures that are also set to hit England this week have caused exasperation and anger as experts say Europe risks being hit with further waves of infections next year if no effective vaccine is found.

Underscoring the pernicious effect of restrictions on economies and livelihoods, Spain -- where tourism accounts for some 13 percent of employment -- said the number of foreign visitors plunged by 75 percent during the first nine months of the year.

As a result, countries are seeking desperately for alternatives to lockdowns.

The British government has decided to roll out coronavirus tests for the entire population of its hard-hit, 500,000-strong city of Liverpool in a pilot scheme that could be scaled up nationwide.

In Belgium, which has one of the highest number of deaths compared to its population, authorities might have shut down the country but have nonetheless decided to keep book stores open for the sake of people's mental wellbeing.

In Greece, cafes, restaurants, bars, gyms, cinemas and theatres and most non-essential businesses shut down in Athens and in the northern cities of Thessaloniki and Serres, which went under even harsher lockdowns.

The measures have drawn concern among business owners and employees in a country that only recently emerged from a crippling financial crisis that began in 2010.

A French hospitals federation said the pressure was such that authorities were planning to transfer COVID-19 patients to Germany for treatment -- as Belgium is already doing.

Speaking at a press conference alongside Health Minister Jens Spahn, he said Germany had enough beds and ventilators for now.

Amid the uncertainty in the world, where the virus has killed more than 1.2 million people, drug companies are rushing to produce what has become the sector's holy grail -- a viable vaccine.

The World Health Organization has identified at least nine candidate vaccines at the most advanced phase-three stage, in which a vaccine's effectiveness is tested on a large scale.