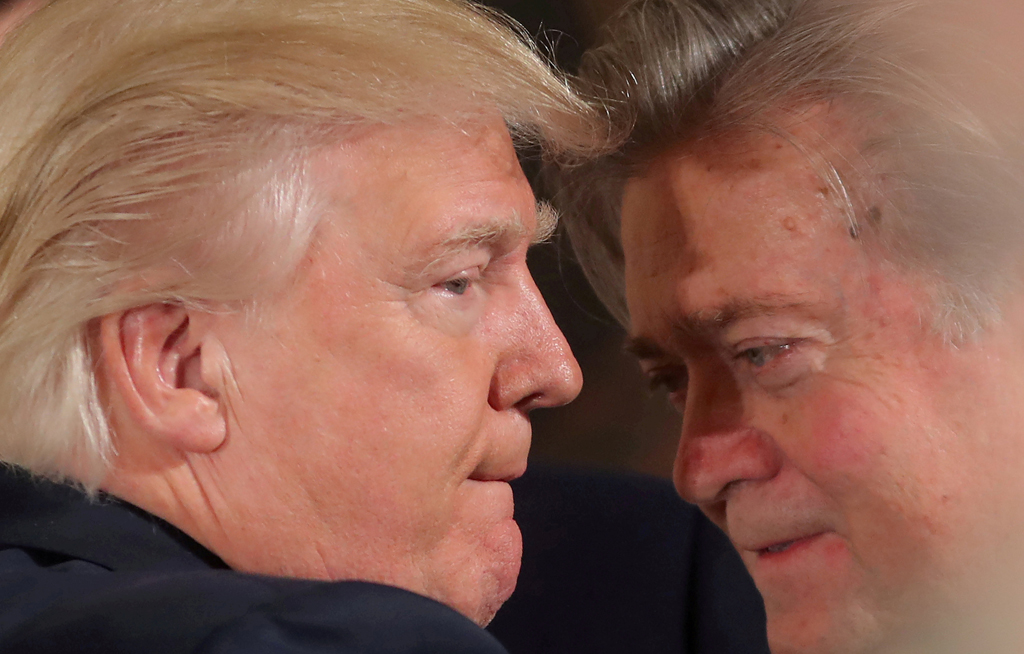 FILE PHOTO: US President Donald Trump talks to former chief strategist Steve Bannon during a swearing in ceremony for senior staff at the White House in Washington, US January 22, 2017.

NEW YORK - Former top Trump strategist Steve Bannon was arrested and charged Thursday along with three others for defrauding hundreds of thousands of donors in a Mexico border wall fundraising campaign - a blow to the Republican incumbent.

The online crowdfunding campaign known as "We Build the Wall" raised more than $25 million, prosecutors said, which the defendants promised would be used on construction but which they instead funneled to their own pockets.

The arrest is the latest in a string of high-profile criminal probes into Trump's inner circle, and comes just months before November's vote the Republican hopes will win him re-election.

Shortly after the charges were announced the president aimed to distance himself, saying: "Don't know anything about the project at all."

"I think it's a very sad thing for Mr. Bannon. I think it's surprising," Trump said, adding he felt "very badly" and he hasn't "been dealing with him for a long period."

Manhattan federal prosecutors said Bannon, the organization's founder Brian Kolfage, venture capitalist Andrew Badolato and Timothy Shea "received hundreds of thousands of dollars in donor funds from We Build the Wall, which they each used in a manner inconsistent with the organization's public representations."

The initiative began in 2018 as a GoFundMe campaign to raise money organizers said would go towards the border wall Trump had promised during his 2016 campaign, which Bannon orchestrated.

One week after launching, the online appeal took in $17 million, which raised suspicions at the crowdfunding  site and prompted it to temporarily shut the campaign down.

GoFundMe said organisers would need to identify a legitimate nonprofit where the money was headed or it would be returned.

The four men began using both a Bannon-controlled non-profit and a Shea-led shell company, as well as vendor agreements and fake invoices, to conceal their tracks, court documents said.

Prosecutors say the men gave repeated false assurances to donors, vowing that all funds raised would go "only directly to wall!!! Not anyone's pocket."

Kolfage, a 38-year-old based in Florida, at one point even urged donors to purchase coffee from another company he ran, saying it was the only way to keep "his family fed and a roof over their head," prosecutors said.

Bannon, 66, publicly called himself a "volunteer" in the operation.

Some donors wrote personally to Kolfage saying they were low on funds and skeptical of online fundraising, "but they were giving what they could because they trusted Kolfage would keep his word about how their donations would be spent," the indictment said.

Kolfage - a US Air Force veteran - repeatedly assured them their money was safe, but in fact, prosecutors say he took more than $350,000 for his own use, funding personal expenses including boat payments, a luxury SUV, a golf cart, cosmetic surgery and credit card debt.

Badolato, Shea and Bannon each received hundreds of thousands that went to expenses including travel, hotels and consumer goods, according to the documents.

Bannon in particular received over $1 million of the donations which he funneled through his non-profit, using some of it to pay Kolfage while a substantial sum lined his own pockets.

The men learned their scheme might be under federal criminal investigation in approximately October 2019, when they began crafting additional measures to conceal it, prosecutors said.

Once a prominent voice in the president's ear, Bannon was behind some of Trump's most controversial moves, including his ban on some travelers from abroad and the decision to pull the United States out of the Paris climate change agreement.

After frequent clashes with others in the White House including Trump, Bannon was pushed out in August 2017.

Half a dozen close Trump associates have been indicted or convicted since he took over the White House, including several key leaders of his 2016 campaign effort.

Roger Stone - the president's longtime ally who was convicted on felony charges including obstructing the congressional Russian collusion probe - was the first person directly involved in Trump's campaign to receive clemency.