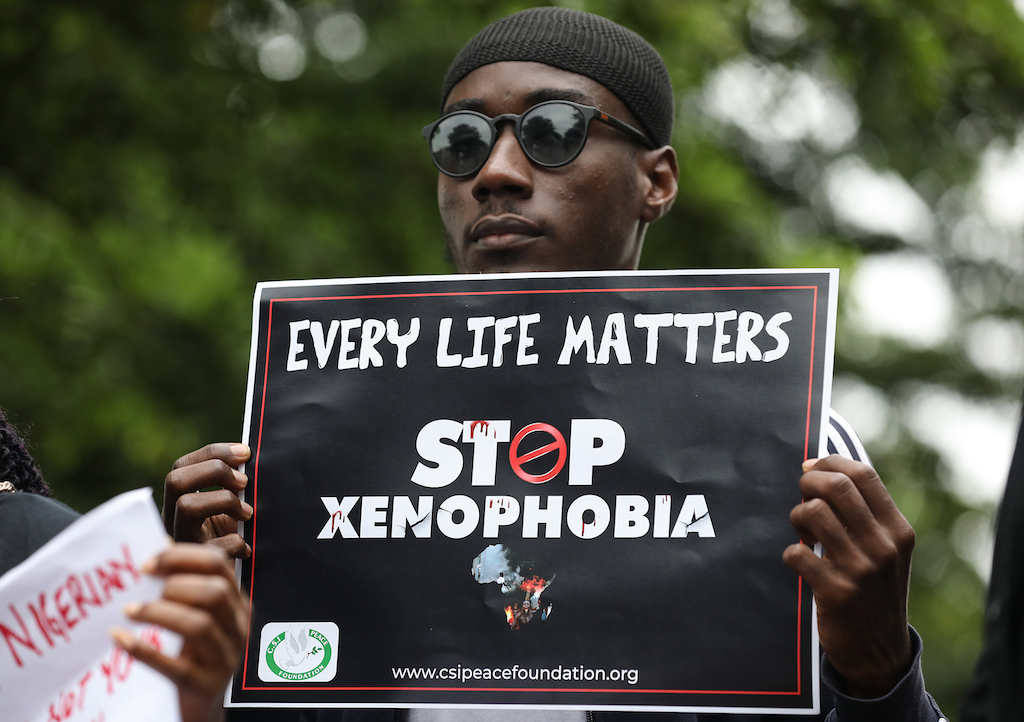 File: A demonstrator holds a sign during a protest against xenophobia outside of the main gate of the South African High Commission which was shut down to avert reprisal attacks in Abuja, on September 5, 2019.

JOHANNESBURG - Reeling from a terrifying surge of unrest that saw his shop wrecked and plundered, Nigerian-born Alvan Akujinwa toyed with the possibility of leaving his adopted home of South Africa for the first time in 10 years.

His mobile-phone repair business in downtown Johannesburg was targeted when gangs armed with sticks and machetes attacked businesses in the financial capital last month during deadly xenophobic attacks.

Now his wife is too terrified to leave their apartment and Akujinwa is struggling to pick up the pieces.

"They jumped in and destroyed all the things we have here, even our shop glass (display cabinet)," he said, glancing nervously through the metal gate between him and the street.

"Now we are very, very scared to buy more stuff and put it in our shop."

Akujinwa, 38, was among thousands affected by the violence, which left 10 South Africans and two foreigners dead last month.

Many of the attacks were directed at Nigerian-owned businesses and properties, sparking sharp exchanges between Africa's two superpowers.

READ: Xenophobia: time for cool heads to prevail in Nigeria and South Africa

The issue threatens to dominate Nigerian President Muhammadu Buhari's three-day official visit to South Africa starting on Thursday and the presidency in Abuja has said he would use the state visit to discuss the "welfare of Nigerians".

More than 500 Nigerians were repatriated by authorities last month following the violence.

Akujinwa is one of many others who chose to stay.

Originally from Nigeria's southeastern Imo state, Akujinwa sees no future for his three-month-old baby daughter in a country where he himself has never been employed.

"I am not equipped to go back," he told AFP.

"Maybe the incidents are going to revolve back... Let me wait and (see if) it will be quiet."

South Africa is a magnet for economic migrants searching for better job prospects in the region.

The continent's most industrialised economy attracts people from neighbouring Lesotho, Mozambique and Zimbabwe.

Others come from further afield including Ethiopia, Malawi, Nigeria and south Asia.

Akujinwa left his home city of Owerri in 2009, one year after a similar spate of xenophobic violence left 62 dead.

He remembered hearing the news but not thinking much about it.

"We didn't even know that word, xenophobic."

With no qualifications, he sold fruit on the inner-city streets for three years before switching to phone repairs.

"When I arrived here I improved," said Akujinwa, recalling his journey.

"When you make a decision to go, job or no job, you find something."

Seen as competing with locals for jobs, they are often the first under fire when South Africa's chronic unemployment, inequality and poverty boils into xenophobic outlash.

Akujinwa had so far remained unscathed.

READ: Buhari touches down in SA for state visit

As business picked up, he moved to an apartment in Hillbrow - one of Johannesburg's most dangerous and deprived areas - where he has maintained good relations with his South African neighbours.

"Black, white or coloured. I am with them there."

Akujinwa felt settled enough in Johannesburg to invite his wife Gift to join him last year.

They moved to a bigger space in the same building and Gift recently gave birth to their first child.

"I fear for them (my family) because I am the head of the house," said Akujinwa, adding that the shop was shut for almost a week after the looting.

"I have to go out and look for something for them to eat."

Akujinwa said people "on the streets" had more pressing concerns than Buhari's visit, which was initially planned to discuss trade and politics.

But he said he hoped his presence would push the South African government into helping those who have decided to stick it out in the country.

"If they discuss well, the Nigerians that (want) to stay here can stay," he said.