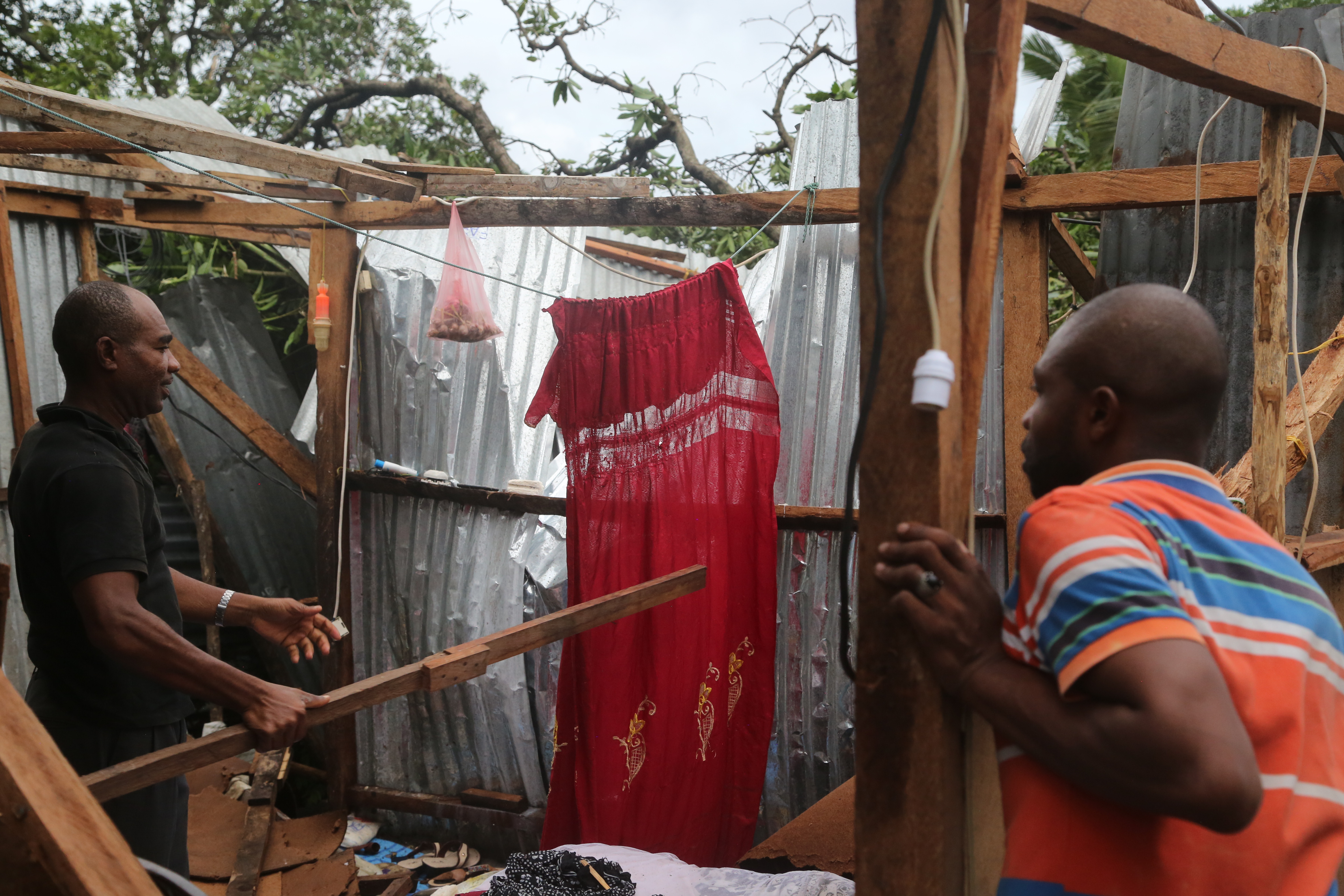 People check damages to a structure on April 25, 2019 in Moroni after tropical storm Kenneth hit Comoros before heading to recently cyclone-ravaged Mozambique. Cyclone Kenneth passed the Indian Ocean archipelago nation Comoros today but its effects, including high winds and heavy rains, were still being felt, the country's Meteorological Office wrote on Facebook.

"Uptil now we have had five deaths," Carlos Do Rosario told reporters in Pemba, the capital of the northern province of Cabo Delgado which was ravaged by Cyclone Kenneth.

The earlier toll given was one - a death caused by a falling coconut tree in Pemba.

The Category Three storm on the hurricane scale struck after swiping the Comoros islands. It made landfall on Friday.

"Tropical Cyclone Kenneth has now 'stalled' over Cabo Delgado ... where it is expected to bring heavy rains in the coming days," said OCHA, the UN's humanitarian coordination office, adding that it would remain in the area "for at least two days."

"The stalling of the weather system is likely to cause significant flooding in Cabo Delgado, as well as high rainfall in southern Tanzania, over the next 10 days," it warned.

It said Kenneth - which has now receded into a tropical depression - had damaged or destroyed 3,300 homes while about 18,000 people were housed in emergency shelters.

On Saturday morning, emergency workers including Brazilian soldiers, OCHA personnel and officials from the UN children's agency UNICEF, arrived in Pemba to assess the damage.

"The INGC tell us to come here to make an evaluation of the situation," Captain Kleber Castro of the Brazil rescue service told AFP on the tarmac at Pemba airport.

"Pemba had a minimal disaster impact. But we really need to know about the cities with 90 percent damage. Now we look for some aircraft and evaluate all the locations," he said.

"It looks like the island has been bombed... It is biblical," said Kevin Record, a South African tour operator and owner of a hotel on Ibo.

The work of rescuers has been hamstrung by damaged infrastructure, including communications.

"A lot of people can be impacted in the region where the flooding is large and widespread," said Castro.

"The most difficult thing is transportation - we don't have helicopters yet. We need a lot of support, if you can help us we need support from helicopters."

The storm also smashed into Zimbabwe and Malawi. In the three countries, more than a thousand lives were lost, and damage is estimated at around $2 billion (1.8 billion euros).