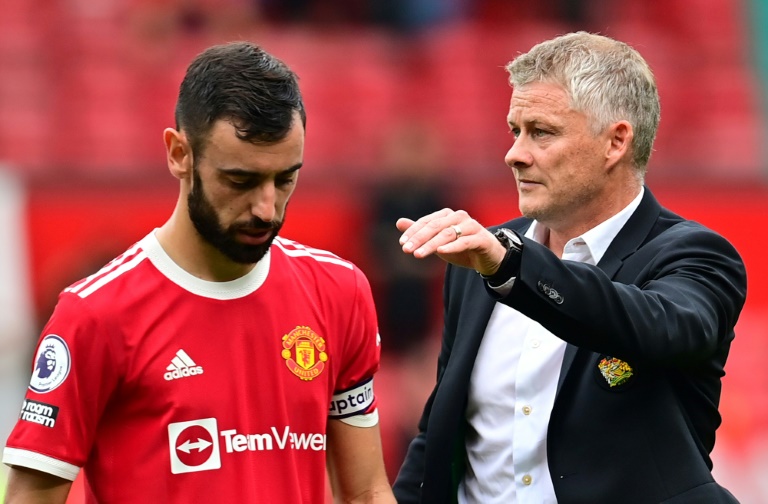 The Portuguese midfielder blasted his 93rd-minute spot-kick over the bar minutes after Kortney Hause's late headed goal, which earned Villa their first win against United since December 2009.

United drew a blank for the first time this season despite boasting the league's best-attacking record and a star-studded line-up featuring Cristiano Ronaldo, Fernandes, Paul Pogba, and Mason Greenwood.

United have lost three of their past four matches in all competitions after exiting the League Cup on Wednesday and conceding a late winner in their Champions League opener at Young Boys the week before.

The visitors were guilty of wasting several gilt-edged opportunities but were eventually rewarded for their enterprise in a frantic finale.

Hause beat Cavani at the near post at a corner to give Villa the lead in the 88th minute before conceding a penalty for handling a Cavani header.

But Fernandes -- on spot-kick duty ahead of Ronaldo -- missed in a dramatic finish to the game.

Defender Matt Targett squandered Villa's first clear-cut chance of the game when he blazed over at the back post in the 16th minute.

Lingard's misplaced back pass cost United dear in the Champions League against Young Boys and Harry Maguire almost made the same mistake at Old Trafford.

However, Villa striker Ollie Watkins's shot was too close to the Spaniard.

Ezri Konsa was the next Villa player to spurn a glorious chance as he missed the target with a header from six yards.

Visiting goalkeeper Emiliano Martinez was called into action to deny Greenwood in the second half but the away side continued to have the upper hand.

Watkins drew another fine save from De Gea and young midfielder Jacob Ramsey lacked composure in front of goal as Villa appeared to have missed their chance to claim a rare Old Trafford win before the dramatic denouement.