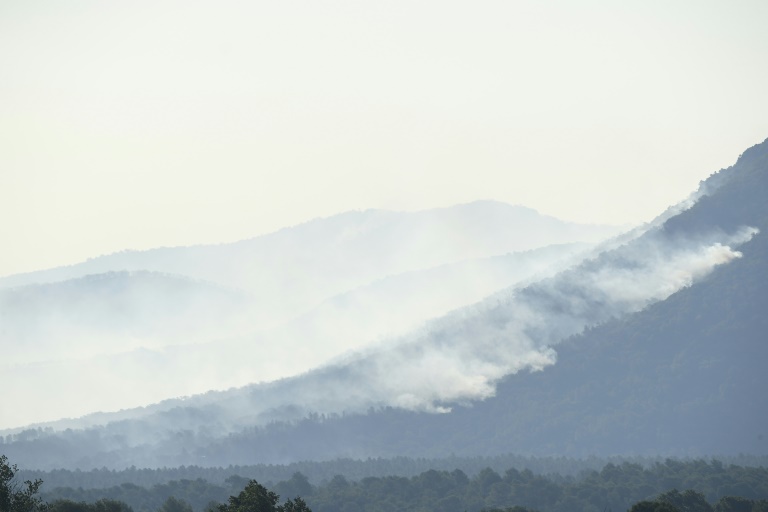 By Tuesday morning, the fire had already covered more than 3,500 hectares of forest and scrubland

LE LUC - Thousands of people, including tourists in campsites, have been evacuated to escape a wildfire raging near the plush tourist resort of Saint-Tropez in southern France, the fire service said Tuesday.

Around 750 firefighters and water-droppping aircraft were battling the blaze in difficult conditions, with high temperatures and strong winds.

"Thousands of people have been evacuated as a precautionary measure, but there are no victims," a fire service spokeswoman, Delphine Vienco, said, adding that the blaze was "still very fierce".

Southern France is the latest area around the Mediterranean basin to be hit by wildfires this summer, a seasonal phenomenon which climate scientists warn will become increasingly common because of man-made global warming.

The blaze broke out Monday at a motorway stop about 100 kilometres northeast of the port city of Toulon.

By Tuesday morning, it had already covered more than 3,500 hectares of forest and scrubland, according to the fire department.

"This is the area covered but it is too early to estimate the area burned," the spokeswoman said.

Evacuations have mainly taken place around Saint-Tropez and the villages of Le Mole and Grimaud, Vienco said.

"The fire is very huge and its spreading at a speed of four kilometres an hour, it's a very difficult battle.

"During the night we managed to prevent the fire from reaching Garde-Freinet," a village about 20 kilometres from Saint-Tropez.

Interior Minister Gerald Darmanin is due to travel to the areas later Tuesday.

The Var prefecture confirmed that several campsites were evacuated and asked people to avoid congesting the roads around the Gulf of Saint-Tropez so that the emergency services can access the area.

Those evacuated were housed in municipal buildings in the region.

Hot and arid southeast France, which regularly experiences summer wildfires, had been relatively spared so far this year.

According to the Prometheus database on forest fires in the Mediterranean region, the total area burned in France in the four regions hit was 2,336 hectares for 2021, against 7,698 for the whole of 2020.

At least 2,700 people, including many tourists, had to be evacuated, some by sea.

By Estelle Emonet And Nicolas Tucat