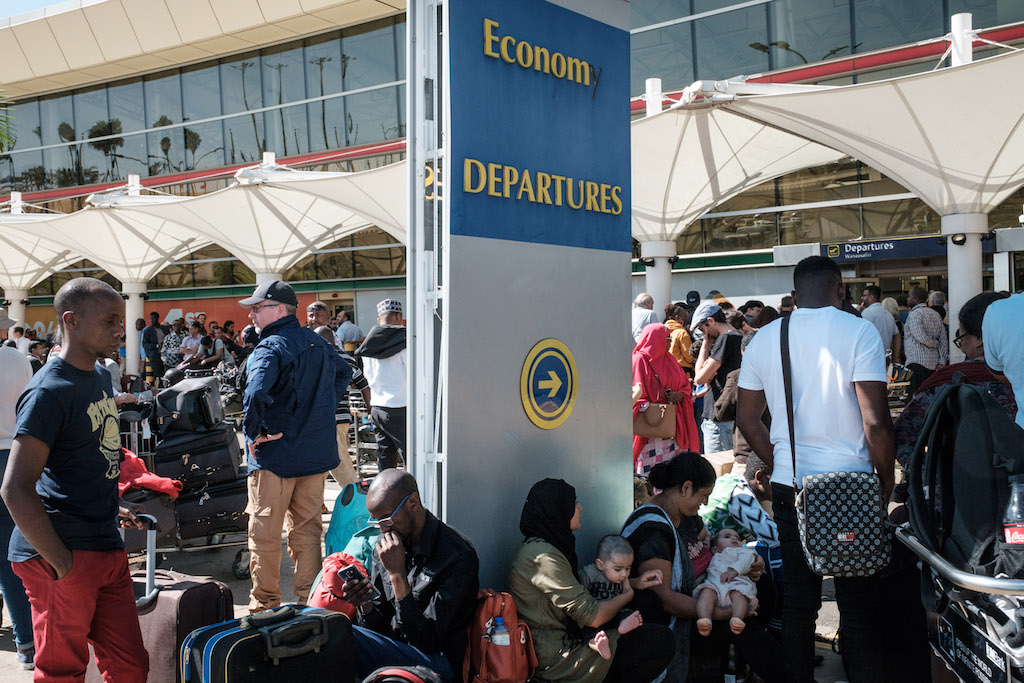 Passengers were blocked from entering Kenya Airways's departure terminal due to a strike by the airline workers.

NAIROBI - Thousands of air passengers were stranded in Kenya on Wednesday after a strike by aviation workers at the main Nairobi airport led to the cancellation and delay of scores of flights and the use of riot police to break up the industrial action.

By the end of the day, however, most scheduled arrivals had been processed while the departures backlog was being cleared, state-run airports operator KAA said. The strike was sparked by a plan to hand over management of the profitable airport, the largest in the country, to the loss-making national carrier.

Kenya, which relies on tourism as one of its chief foreign exchange earners, deployed anti-riot police carrying clubs and glass shields. They charged at hundreds of picketers, chasing them out of the Jomo Kenyatta International Airport (JKIA) and arresting their union leaders.

The striking workers from KAA and flag carrier Kenya Airways were responding to a call by their union, the Kenya Aviation Workers Union (KAWU), which opposes the plan to hand over the running of JKIA.

Kenya Airways wants to emulate more successful airlines such as Ethiopian, which is one of Sub-Saharan Africa's biggest by fleet size, by paying the airport authority concession fees and running profitable services such as catering, fuel distribution, cargo and ground services facilities and maintenance.

Thousands of passengers were affected by the disruption, witnesses estimated.

Kenya Airways, which uses the airport as a hub, cancelled at least four flights, it said. Another 24 flights were delayed and two diverted.

Government officials scrambled to contain the damage from the strike at JKIA, which is vital for the tourism sector and to Kenya's status as a regional business hub.

He earlier sent a tweet accusing "a few rogue elements" at KAA of causing the disruption.

Moses Ndiema the secretary general of KAWU, was arrested at the airport. He was later taken to court to face unspecified charges. Five other union officials and four of its members were taken to court with him, Ndiema told Reuters by phone.

Kenya's employment and labour relations court had ordered the suspension of the planned strike by KAWU on Tuesday.