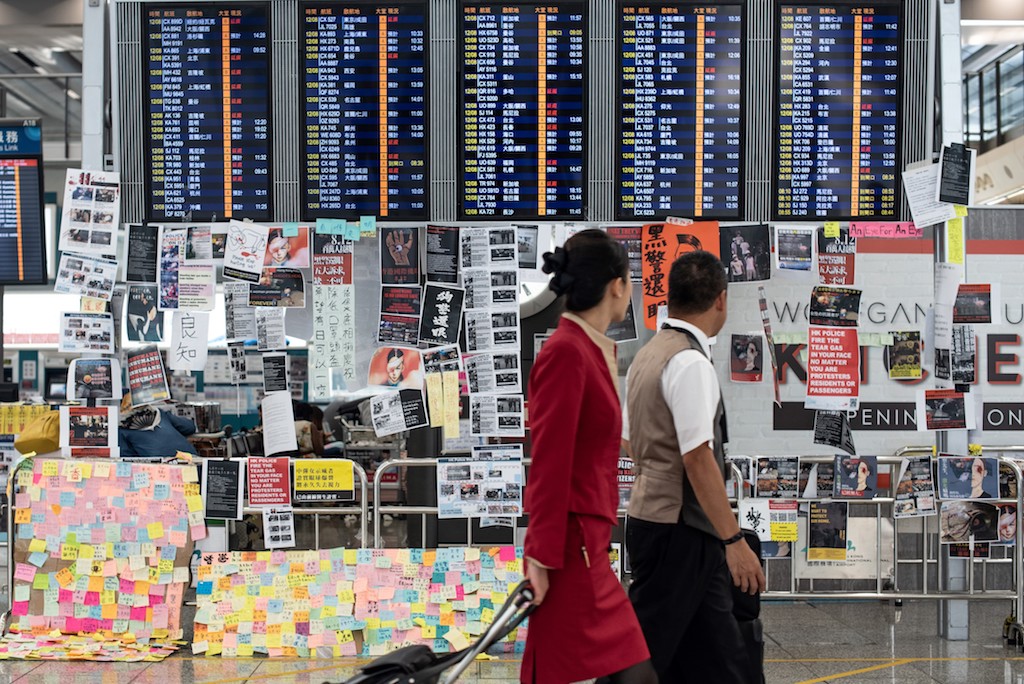 Two flight attendants walk past an electric display board covered with memos and posters at Hong Kong's international airport.

HONG KONG - Hong Kong airport re-opened on Tuesday after a rally by thousands of pro-democracy protesters triggered an unprecedented shutdown, but hundreds of flights were still listed as cancelled.

The abrupt closure marked a new low in a 10-week crisis that has seen millions of people take to Hong Kong's streets in the biggest challenge to Chinese rule of the semi-autonomous city since its 1997 handover from Britain.

The protests on Monday were driven by anger over alleged police brutality, with demonstrators claiming one woman had lost an eye at a weekend rally and video showing tear gas being used against them in a subway station.

But the protests have led to rising anger from authorities in Beijing, who on Monday described some of the violent demonstrations as "terrorism".

Early Tuesday, passengers with luggage were being checked in at the departures hall and information boards showed several flights were boarding or about to depart.

But the woes at the airport remained far from over, with a massive backlog of flights to clear and activists calling for another protest there on Tuesday afternoon.

On Tuesday morning, only a handful of protesters remained in the airport.

It was unclear whether protesters, who have no clear leadership and organise via social media, would return to the airport in big numbers on Tuesday.

Nor was it clear whether authorities would allow them to protest.