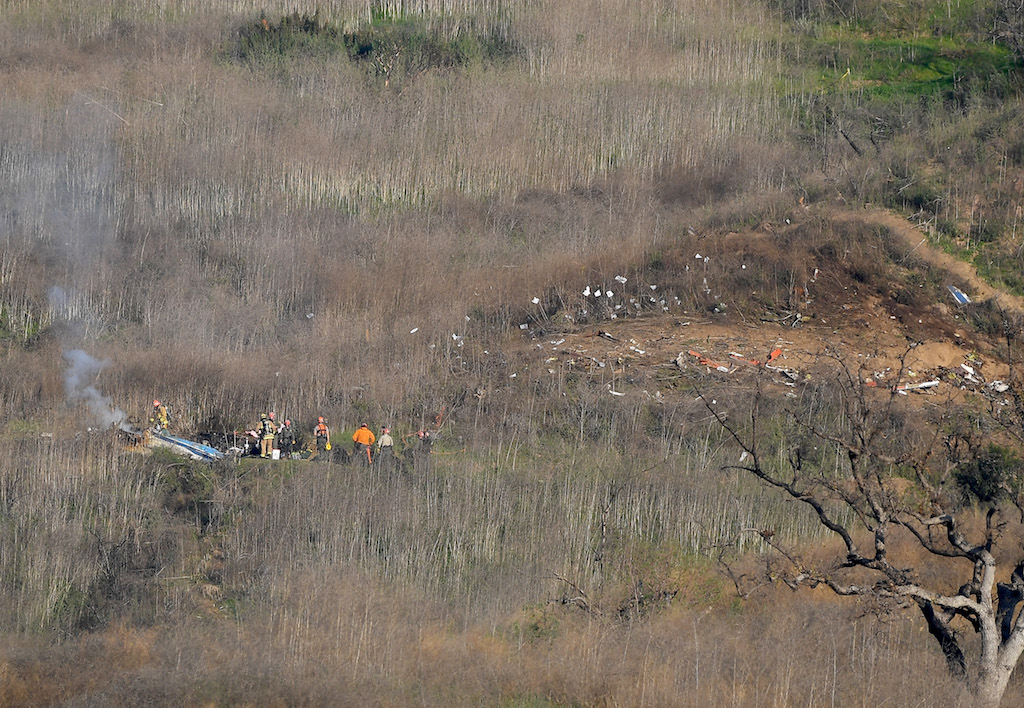 Members of LA County Fire and LA County corners begin the task of removing bodies from the hillside where the helicopter carrying Kobe Bryant and 8 others crashed in Calabasas, CA.

CALABASAS - Overcast skies and fog reported at the scene of the helicopter crash that killed former NBA superstar Kobe Bryant, his daughter and seven others appear likely to become a key focus of aviation experts investigating the weekend tragedy near Los Angeles.

A Sikorsky S-76 chopper owned by Bryant slammed into a steep hillside on Sunday morning outside the town of Calabasas, California, about 65 km)northwest of downtown Los Angeles, igniting a brush fire and spreading debris over a quarter-acre of grassy terrain.

Hours later, Los Angeles County authorities said that all nine people aboard the helicopter had perished in the crash.

The deaths of Bryant, 41, and his 13-year-old daughter, Gianna, were confirmed by the National Basketball Association, as expressions of disbelief and grief poured in from fans, fellow athletes and politicians.

Bryant and his entourage were reported by local media to have been on their way to a sports academy in the nearby city of Thousand Oaks, where he was to have coached his daughter's basketball team in a youth tournament.

Investigators from the Federal Aviation Administration and the National Transportation Safety Board began arriving in the area on Sunday to launch separate crash investigations.

Among the factors expected to be at the forefront of the probe are weather conditions, given that forecasters reported low clouds and limited visibility in the vicinity at the time of the crash, and various eyewitnesses recounted thick fog over the foothills where the helicopter went down.

Fog in the area was so bad Sunday morning that the Los Angeles Police Department grounded its helicopter fleet until that afternoon, the Los Angeles Times and CNN reported. It was not known whether the pilot of Bryant's helicopter was trained for instrument-only flying in limited-visibility situations.

The one-time star forward was known since his playing days to travel frequently by helicopter to avoid the Los Angeles area's notorious traffic.

Bryant rocketed to fame as an 18-year-old rookie and played 20 years for the Los Angeles Lakers - 18 of them as an all-star - winning five NBA championships. He was the fourth-highest scorer in league history, with 33,643 career points.

Others aboard the ill-fated helicopter, in addition to the pilot, included a teammate from Bryant's daughter's basketball squad and a parent of the teammate, NBC News reported.

Orange Coast College baseball coach John Altobelli was also one of the victims, the Orange County Register reported, citing assistant coach Ron La Ruffa. So too was Christina Mauser, a girl's basketball coach, according to the Los Angeles Times and TMZ Sports.

None of the dead were named on Sunday by Los Angeles County officials, who said they were awaiting positive identification of the remains by medical examiners and notification of next of kin.