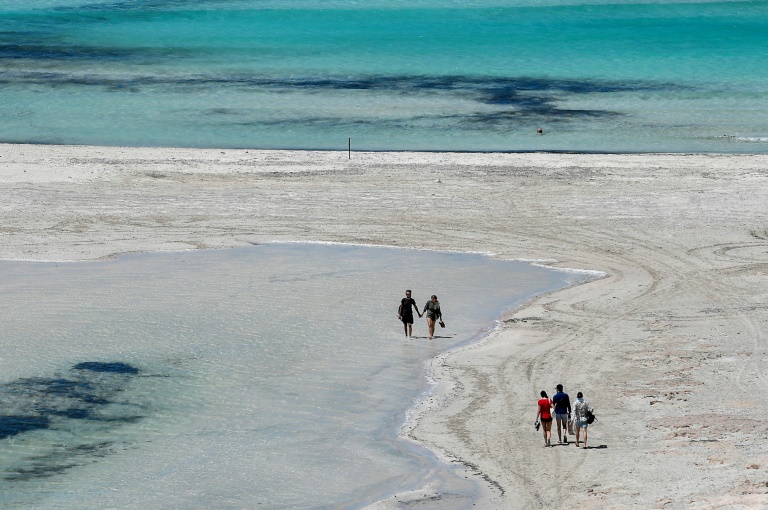 ATHENS - Tourists basked in the warmth, sun and crystal waters of Crete on Friday for long-awaited holidays as Greece kickstarted its tourism season after last year's pandemic misery.

Greece and Europe's other tourism hotspots are vying to woo back visitors after the pandemic wrecked last year's holiday season as countries imposed travel bans and quarantines.

France and Spain launched tourism campaigns this week while Italy said Friday it was scrapping a quarantine requirement for visitors from the EU, Britain and Israel who test negative for the coronavirus.

Portugal said it would allow British tourists visit the country again from Monday after London placed the country on its safe list -- just in time for fans heading to the May 29 Champions League final in Porto.

READ: Greece reopens islands to flights in bid to save tourism

Tourism is crucial to the Greek economy, as it accounts for 20 percent of GDP.

"We are raising anchor," Greek Tourism Minister Harry Theoharis declared as he launched the holiday season Thursday evening from the ancient Greek temple of Poseidon near Athens.

The new holiday season couldn't come soon enough for restaurateurs and cafe owners eagerly preparing for patrons to come back after suffering so long under coronavirus lockdown measures.

The opening of the tourism sector comes as Greeks will also be allowed to go about freely within the country for the first time since November.

"Last year everything was a blur, now we are entering a different tourist season," said George Segredos, a beach bar owner on Kos island.

Greece's tourism revenue plunged to 4.28 billion euros ($5.0 billion) in 2020 from 18 billion euros in 2019, while tourist arrivals fell 76.5 percent to just 7.4 million, according to the Greek Tourism Confederation Institute.

Tourism is far from being back to normal.

The Greek island of Kalymnos remains in strict lockdown owing to scores of recent infections, highlighting how fragile and fluid the situation remains.