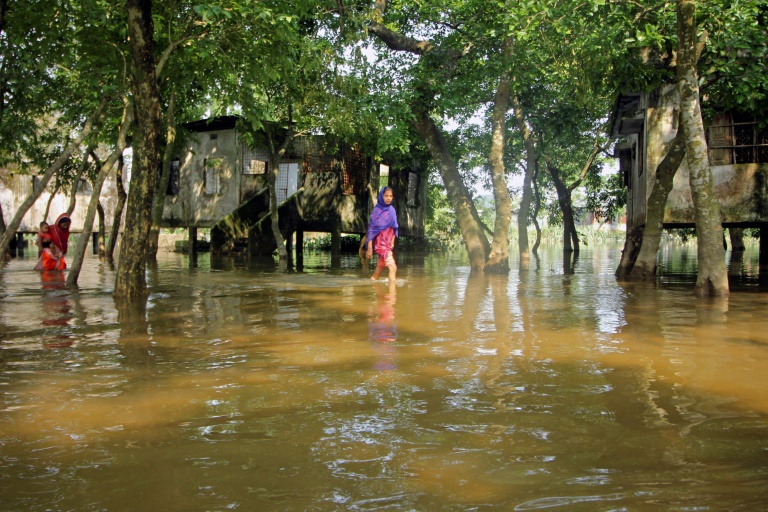 At least four million people have been affected by the worst floods in Bangladesh's northeast for nearly two decades, the United Nations estimates

SYLHET - At least four million people have been affected by the worst floods in Bangladesh's northeast for nearly two decades, the United Nations said Monday.

The Bangladeshi government said the floods, which began last week, had submerged 70 percent of Sylhet district in the northeast and 60 percent of Sunamganj district, leaving at least 10 people dead and about two million marooned.

Heavy rains and a rush of water from upstream in India's northeast swelled rivers in Bangladesh, with two main border rivers, the Surma and Kushiara, breaching a major embankment and inundating hundreds of villages.

Arifuzzaman Bhuiyan, the head of the state-run Flood Forecasting and Warning Centre, said the two rivers hit their highest levels since records began in the 1970s.

"It is one of the worst floods in the history of the country's northeast," he said. "The water level in the two rivers hit some 1.75 metres (5.7 feet) above their danger level at the height of the floods last week."

The United Nations Children Fund put the extent of the damage even higher with "over four million people" in five districts in the country's northeast affected by the floods.

"The damage to lives, homes and schools is heartbreaking. In this disaster, as in most others, children are the most vulnerable," said Sheldon Yett, UNICEF Representative to Bangladesh.

Bangladesh has shut all schools and colleges in the region.

At least 350 schools have been turned into shelters with more than 8,500 flood-hit people seeking refuge in them, along with their cattle and goats.

But Netai De Sarker, a senior disaster management official, said the flood situation had improved, with water receding from the northern areas, although 1.23 million people were still stranded as of Monday.

He said the government has sent 140 medical teams to treat flood-affected people and to help prevent any outbreak of water-borne diseases.

Floods are a regular menace to millions of people in low-lying Bangladesh and neighbouring northeast India, but many experts say that climate change is increasing their frequency, ferocity and unpredictability.