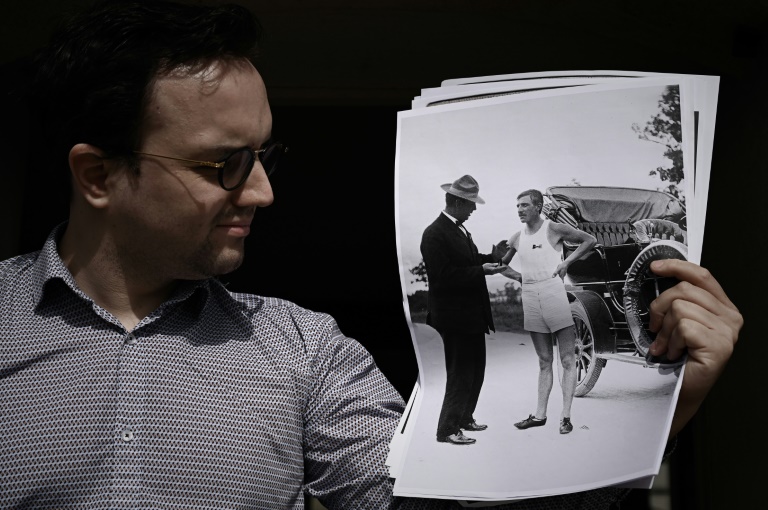 MEURSAULT - It has taken 117 years, but long-distance runner Albert Corey may finally be nearing home, bringing his two Olympic silver medals with him.

Corey was declared an American by the organisers when he won silver in the marathon at the 1904 Olympics in St Louis, Missouri. But now the French want him, and his medals, back.

Clement Genty, a councillor, engineer and amateur historian holds up a faded black and white photo, in which Corey looks like the archetypal amateur in his oversized sleeveless vest, crumpled shorts and laced leather shoes.

Yet this penniless son of Burgundian winegrowers collected what should have been France's only Olympic medals of the 1904 Games.

"A beautiful story," says Genty. "I learned of his existence in a newspaper and did some research."

Corey was born in Meursault in 1878, the year that the village became the first in the Cote d'Or area to be hit by phylloxera, which ravaged the vines.

Etienne Corey, Albert's winemaker father moved to the Paris suburbs and in 1896, Albert enlisted in the French army.

There he discovered a talent for endurance running. He broke the 160km record in 1899 but on January 2, 1903, he went absent without leave. A year later, he turned up as a strike-breaker in the huge Chicago slaughterhouses.

Getting into local athletics was not easy for a man with broken English who had arrived in Chicago, The Washington Times wrote in 1905, "practically a tramp".

READ: N. Korea says will not go to Olympics over COVID-19 fears

When he learned that the Olympics were going to be held on American soil, he said he had run the "Paris Marathon" in 1900.

This was true, but he played on the confusion with the Olympic Marathon of the same year to make people believe that he had participated in a much more prestigious event.

The ploy worked and he went to St Louis representing the First Regiment Athletic Association of Chicago.

Because the St Louis Games were so hard and expensive to reach from outside North America, they attracted few international entrants. Corey would have been the only Frenchman.

"But he belonged to an American club. He was therefore considered American, according to the rules of the time," Genty told to AFP.

These were the first Olympics at which gold, silver and bronze medals were awarded.

The marathon was run in the hottest part of a sweltering late August day over a hilly, dusty course that, because the race distance had not yet been standardised, was 40km long.

With only one water stop along the course, more than half of the 32 participants dropped out. 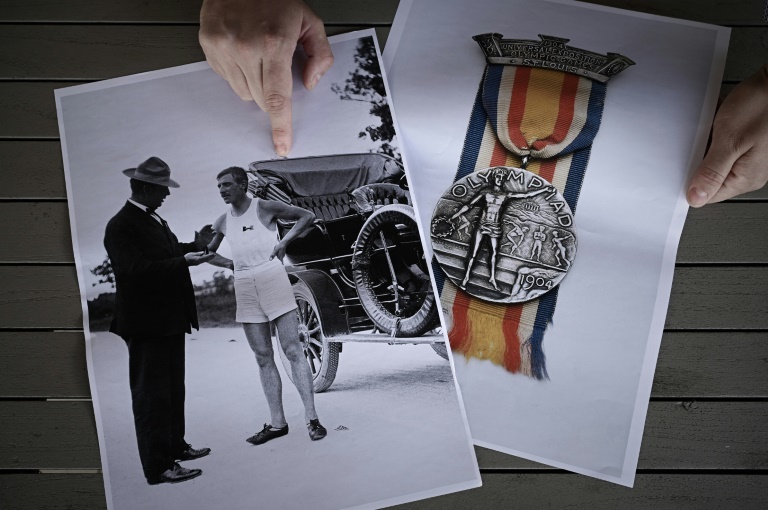 Corey, on the other hand, boasted "I could have done one more lap".

He crossed the line third but the 'winner', Fred Lorz, was disqualified for hitching a lift in a car.

Gold instead went to British-born American Thomas Hicks who, fuelled by strychnine mixed with brandy, completed the course in 3hrs 28min 53 sec to beat Corey by six minutes. Corey was almost 13 minutes ahead of the bronze medalist.

Corey also won a silver with four Americans in a team that won a 20-mile relay -- although he is not referred to as American in the records for this one and the medal was assigned to a 'mixed' team.

The US media was under no illusion that Corey was anything other than French.

They hailed the "success story" of this "Frenchman", a "slaughterhouse worker", who became the "New Star for Marathon".

In October, 1908, the Buffalo Evening Times wrote: "It must be nice to train like Corey. The Frenchman who won the Marathon race declared that he owed his success to having trained on champaigne (sic)."

Olympic historians have long classified Corey as French but his marathon medal is credited to the United States and the IOC appears unwilling to change that.

"There is no question of changing the country to which these medals are awarded," its press office told AFP.

Corey's bid to win another medal at the 1908 Olympics in London failed, however, when he declined France's invitation to represent them in favour of opting to run for the US, who then proceeded not to invite him.

He won the 1908 Chicago Marathon but the following year, Corey was hit by a car and never regained his former level of performance.

He returned to France in the summer of 1910 and resumed a military career. He died in 1926 in Paris, probably of tuberculosis.

His great-grandson Serge Canaud, 69, learned of Corey's unknown past, thanks to a phone call from Genty.

"I was stunned," he told AFP from the small Jura village of Moirans-en-Montagne, where he is living in retirement.

"I've never heard of this in our family: America and the Games. We knew nothing about it."