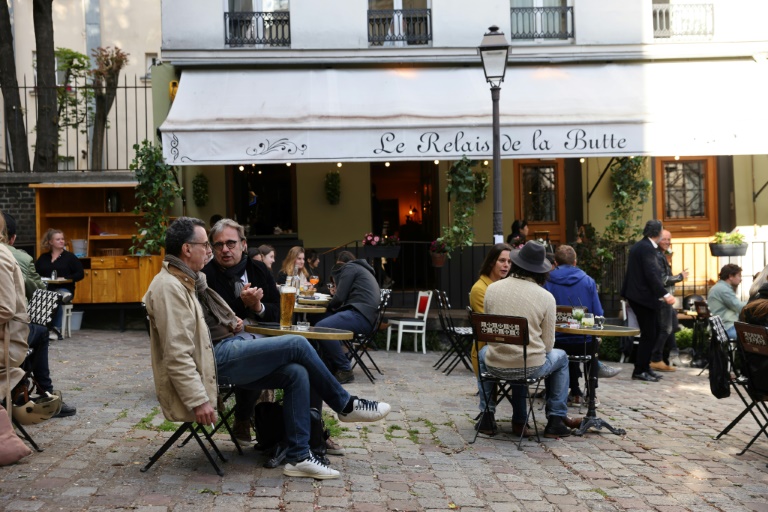 PARIS - People in France enjoyed indoor dining and gyms for the first time in months on Wednesday, as the country relaxed coronavirus rules that will also see a curfew pushed to 11:00 pm as Covid cases ease and vaccines pick up.

Rules for travellers from within the EU were also eased, while cultural venues relaxed their measures in line with France's phased reopening for the summer months.

The return of simple joys was welcome for some.

"It's a pleasure to have a coffee inside. Normal life is gradually resuming," said transport employee Hammou Mraoui, sipping a coffee in a bar in the Meudon suburb of Paris.

Bar owner Christophe Guedes said it was an adjustment to serve indoors again.

"It's almost strange to hear a client say 'a coffee inside please', but it's a huge relief," he told AFP.

The new measures also mean that spectators will be able to enjoy night sessions for the final stages of the French Open tennis in Paris, after previously being slung out at 9:00 pm.

Tables of up to six will be permitted at cafes and restaurants, while gyms can also reopen for clients indoors.

Some fitness buffs were happy to finally be allowed inside again, including Stephanie Moscoso, who hit her local gym in central Paris at 8:00 am.

"I was super motivated. I put on the alarm clock this morning, it was super early, I saw the sun, I said to myself: this is the beginning of a new life!" the 35-year-old said.

Travel to France will also be easier from Wednesday, with borders fully open to EU residents.

Visitors from the EU will not have to provide a negative antigen or PCR test if they have had a full course of one of the four vaccines authorised by the bloc -- Pfizer/BioNTech, Oxford/AstraZeneca, Moderna or Johnson & Johnson.

Travel from other zones, including the US and Britain, are subject to tighter restrictions but visitors will no longer have to prove a compelling reason for a visit, so long as they are fully vaccinated.

Despite the closures of the past year, France over the last half year endured less severe lockdowns than its neighbours -- notably avoiding major school closures -- in what was seen as a major gamble by Macron.

On May 19, France allowed restaurant and cafe terraces to open for the first time since November, while museums also welcomed visitors again.

One sector still lacking clarity is night clubs, which remain closed until further notice, with the government set to look at the situation again on June 21.

And in virtually all of France, masks remain obligatory even out of doors until further notice.

The new openings come as France -- one of Europe's hardest hit countries -- sees a drop off of coronavirus cases after a grim winter. 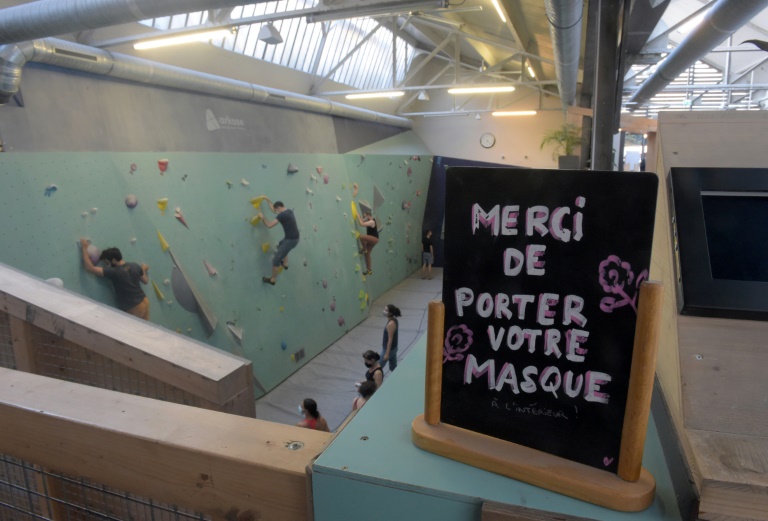 Fitness buffs were happy to finally be allowed inside again, such as at this
climbing club, where a sign reads 'please wear your mask'

And as of Tuesday more than 28 million people had at least one vaccine shot -- about 55 percent of the adult population.

The government is on course to reach its target of 30 million people with at least one dose of the vaccine by June 15.

President Emmanuel Macron urged caution with the reopenings, while embracing a return to normal.

"A new step will be taken" on Wednesday, President Emmanuel Macron wrote on Twitter.

"Life will resume across our lands. It is part of our culture, of our art of living, that we are going to reacquaint ourselves with," he said.