France lose injured Dembele for the rest of Euro 2020 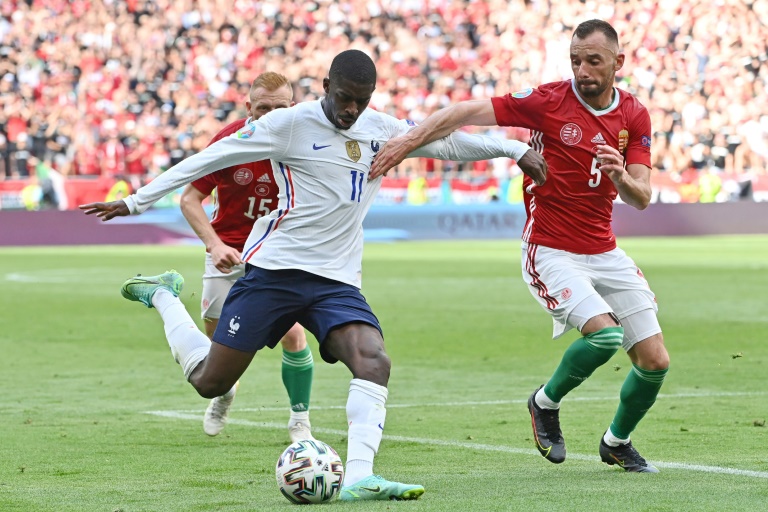 Ousmane Dembele suffered the injury that has ended his participation in Euro 2020 after coming on as a substitute against Hungary. AFP/Pool

BUDAPEST - France have lost Ousmane Dembele for the rest of Euro 2020 after X-rays showed the Barcelona winger's knee injury would not heal in time, the French Football Federation said on Monday.

Dembele was hurt in the closing minutes of the 1-1 draw against Hungary in Budapest on Saturday after coming on as a substitute. X-rays on Sunday evening showed he would not be back before the end of the Euros.

"The recovery time is incompatible with keeping him in the squad," the FFF said.

Dembele came off the bench in both France's matches in the Euros.

He replaced Adrien Rabiot for the final seconds of the opening win over Germany and replaced Rabiot again after 57 minutes in Budapest with France losing and hitting the post with a shot before limping off in the 87th minute.

Under UEFA rules which ony allow for goalkeepers to be replaced during the tournament. France cannot call up a stand-in for Dembele, who has 27 caps.

France started with eight attackers in their 26-man squad including Kingsley Coman of Bayern, a similar type of player to Dembele who has yet to play a minute in the Euros.

After moving from Borussia Dortmund for 135 million euros ($160-million) in August 2017, the second highest fee Barcelona have paid for a player, the "Mosquito" struggled with a series of hamstring injuries. This season, he only had one injury break and made 44 club appearances, scoring 11 goals.

Dembele, who was part of France's World Cup winning squad in Russia in 2018, had a good run up to Euro 2020, scoring in a World Cup qualifier against Kazakhstan in March and against Wales in a friendly at the start of June.

Coach Didier Deschamps has other worries ahead of France's final group game against holders Portugal in Budapest on Wednesday.