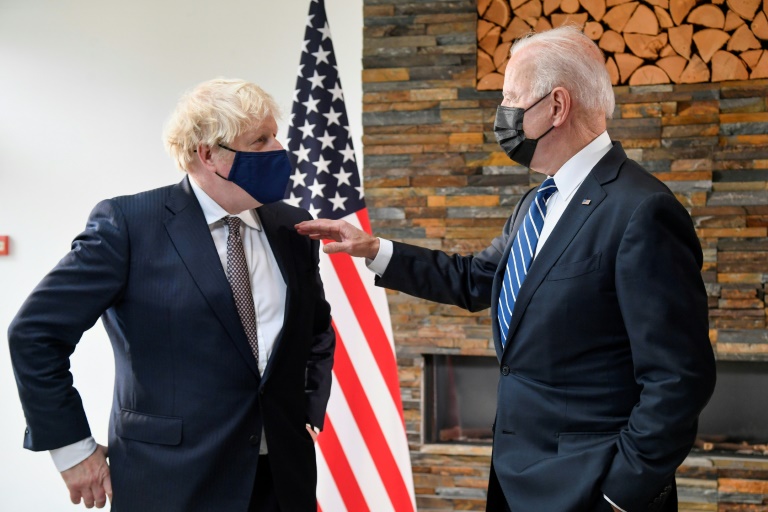 President Biden (l) will attend the G7 summit, on his first foreign trip, along with host Boris Johnson, seen here in Cornwall on Thursday

LONDON - G7 leaders on Friday open a three-day summit aimed at helping to end the COVID-19 pandemic and forge a climate-centric economic recovery, after pledging to donate one billion vaccine doses for the world's poorest countries.

US President Joe Biden and his colleagues from Britain, Canada, France, Germany, Italy and Japan will sit down for their first face-to-face gathering in nearly two years, after the pandemic wiped out last year's summit.

Meeting under the protection of a smothering security operation in the Cornish resort of Carbis Bay, southwest England, the leaders are also expected to address warnings to Russia and China.

Most of the G7 heads of state and government will reconvene on Monday in Brussels for a NATO meeting, before Biden heads on to his first summit with President Vladimir Putin in Geneva, vowing to deliver a blunt appraisal of Russian behaviour.

After arriving in Britain Wednesday on his first foreign tour as president, Biden told US service personnel that "the United States is back and democracies of the world are standing together", following the tumult of his predecessor Donald Trump's go-it-alone administration.

"At Carbis Bay, we must put those days behind us," he said in a pre-summit message.

"This is the moment for the world's greatest and most technologically advanced democracies to shoulder their responsibilities and to vaccinate the world, because no one can be properly protected until everyone has been protected."

Building on Biden's pledge to order 500 million Covid-19 vaccine doses to distribute among poorer nations, Johnson plans to commit Britain to offering "at least" 100 million surplus doses within the next year.

In total, the G7 leaders are expected to adopt a broader commitment of offering up to one billion doses, in order "to end the pandemic in 2022", according to Downing Street.

The World Health Organization regional director for Africa, Matshidiso Moeti, said vaccine-sharing was a "do or die" issue, with doses running short and cases rising across the continent.

Campaigners have slammed inequalities in distribution as "vaccine apartheid", calling on rich nations to do more to help the global south, including by waiving intellectual property rights on vaccines and treatments.

But Oxfam said defeating the virus would take more than "charity", assessing that at the current rate of vaccinations, it would take 57-years for low-income countries to reach the same level of protection as G7 countries.

"That's not only morally wrong, it's self-defeating given the risk posed by coronavirus mutations," it added.

The leaders are also mulling plans to help the developing world transition out of fossil fuels ahead of the UN's COP26 climate meeting in November in Scotland, part of a commitment by richer countries to move to "net zero" emissions by 2050.

Like the G7, Britain wants COP26 to be held in person, and announced that it plans to offer vaccine doses to delegates from poorer nations if they cannot get them otherwise.

The G7 chiefs will be joined over the weekend by the leaders of Australia, South Africa, South Korea, the United Nations and European Union, with India joining remotely.

EU chiefs are vowing to press Johnson on Britain's reluctance to impose post-Brexit trading arrangements for Northern Ireland - a point of controversy that is also exercising Biden, a proud Irish-American with distant family still in Ireland.

Police in Belfast issued warnings Thursday evening after more than 3,000 pro-UK loyalists staged a protest against the "protocol" that effectively keeps Northern Ireland in the EU customs union and single market.

The demonstration breached virus restrictions on the size of public gatherings.

The British prime minister will be hoping to lighten the mood at a beach barbecue on Saturday, joined by his new wife Carrie and other G7 spouses, with a sea shanty band and toasted marshmallows around fire pits.

That will follow a reception on Friday hosted by Queen Elizabeth II and the refounding of the US-UK alliance in an updated "Atlantic Charter", modelled on the World War II pact that was signed at sea to help build a new world order.

"The G7 meeting really is a chance for the West, in particular, to sort of reboot itself," commented international relations professor Richard Whitman at the University of Kent.

"After the pandemic we've got on the one hand, a new US president coming to Europe, reconnecting with allies, and at the same time, we also have a slow recovery from the pandemic, particularly on the part of the G7 countries," he said.

While the United States under Trump had "set the wrong kind of tone" at recent G7 summits, "what we're seeing here is the US is really demonstrating it's the good guy and re-establishing its claims for international leadership".