BANJUL - The last time Fatoumatta Sandeng saw her father, he was leaving the house for a peaceful protest ahead of The Gambia's 2016 presidential election that ousted former dictator Yahya Jammeh.

"He told me, 'Whatever happens, make sure you take care of the family,'" said Sandeng, who was then 22. "That was the last time I spoke to him."

Her father, Ebrima Solo Sandeng, a member of an opposition party, was arrested at the demonstration and tortured. He died two days later, just one of hundreds of alleged victims of human rights abuses under Jammeh's rule.

More than five years after fleeing into exile, Jammeh -- whose regime was notorious for crushing dissent through murder, disappearances, sexual violence and torture -- has not yet been investigated by authorities or prosecuted. That could soon change.

On Wednesday, the government will respond to recommendations from a commission that probed alleged crimes committed by the state under Jammeh from July 1994 to January 2017.

"My expectation is to see prosecutions for people who bear a responsibility for the crimes that were committed, including Jammeh himself," said Sandeng, now the spokesperson for a coalition of victims’ groups.

The Truth, Reconciliation and Reparations Commission (TRRC) found that 240 to 250 people were killed by the state during the eccentric leader’s rule, including AFP journalist Deyda Hydara.

In a report released late last year, the TRRC made more than 200 recommendations, including investigating and prosecuting Jammeh and 69 other alleged perpetrators.

Jammeh is exiled in Equatorial Guinea, which has no extradition treaty with The Gambia.

The commission recommended using a hybrid tribunal or trying him in a neighbouring country. He denies allegations of wrongdoing and still has significant support.

President Adama Barrow, who won the vote in 2016 and was re-elected in December, last year formed a political alliance with Jammeh's former party.

Though the ex-dictator himself rejected the deal, Barrow then nominated two known Jammeh supporters as speaker and deputy speaker of parliament. 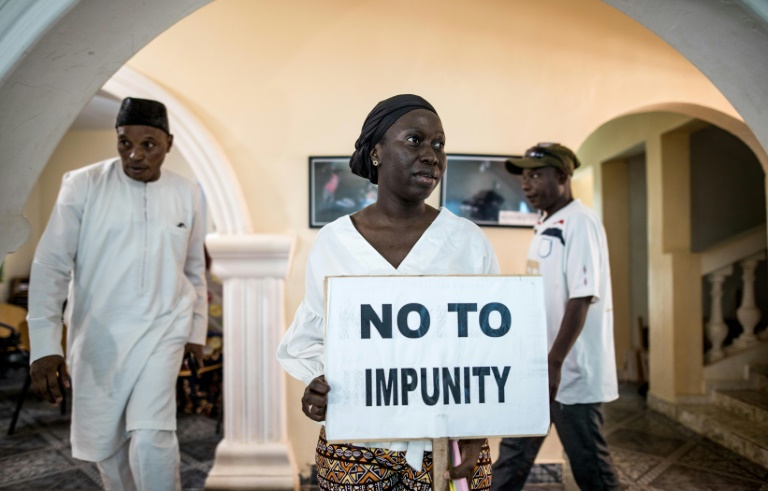 Ex-dictator Yahya Jammeh is exiled in Equatorial Guinea, which has no extradition treaty with The Gambia

"Enforced disappearances are still a continuing violation so long as the body hasn't been found," said Isatou Jammeh, a victims' advocate.

Her father Haruna, a first cousin of the former president, disappeared in 2005 after criticising a witch hunt in their village.

"My dad was an active parent who came to my class whenever we had school events -- I was my daddy's daughter," said Jammeh, who was 14 at the time.

"Growing up, we were made to believe that my father had travelled for work, and we kept on telling people that in our school."

It was not until 2019, during the TRRC process, that her family received formal confirmation of her father's death. They have still not been able to locate his body.

"The laws don't recognise the death, so there is no death certificate, and women are not considered widows so they do not feel they can remarry," said Nana-Jo N'dow, a campaigner whose own father disappeared in 2013.

In most cases the missing person was the family breadwinner, she said.

"They can't say he is dead, but they also don't want their children to go to school and say he is disappeared, so they say he travelled to Europe, took the 'back way'."

Essa Faal, who was the TRRC's lead counsel until he resigned to run for president as an independent in last year's election, said reforming the state intelligence agency, "the main institution of oppression under the Jammeh regime", must be a top priority.

"A lot is at stake," he said. "We will see whether our government is serious about the transitional justice arrangements it put in place or if it was just playing politics."

The current head of state intelligence services, Ousman Sowe, is one of the highest officials the commission targeted. Its report accuses him of destroying and concealing evidence and recommends banning him from public office for 10 years.

Meanwhile, several members of Jammeh's former hit-squad, known as the "Junglers", have returned to the country from exile and remain at large.

One group whose voices were under-represented in the TRRC process is women.

Many survivors of sexual violence chose not to participate for fear of stigmatisation, said Fatou Baldeh, a grassroots campaigner.

Other women were victims of abuses such as witch hunts alongside their husbands, but their stories were lost when only the men in their households spoke to investigators.

Baldeh urged the government to take these victims into consideration and include them in reparations payments too.

"Justice needs to be done to make sure that we achieve 'never again' and set an example to other African leaders," said Isatou Jammeh.

"This is a conversation not just for The Gambia but all of Africa."