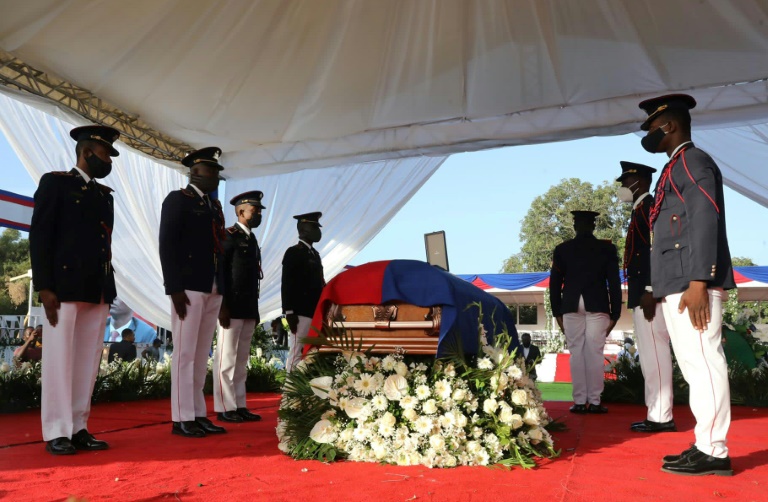 A photo of slain president Jovenel Moise is seen at a memorial ceremony in Port-au-Prince, one of several events leading up to the funeral in Cap-Haitien

PORT-AU-PRINCE - Haiti on Thursday prepared to bury its slain president under tight security, just over two weeks after his assassination further rattled a country mired in poverty, corruption and political instability and stirred long-standing racial tensions among its population.

Jovenel Moise, who was 53 when he was shot dead in his home in the early hours of July 7, will be interred Friday in Cap-Haitien, the main city in his native northern region.

The city was calm Thursday but a day earlier, clashes broke out when police chief Leon Charles visited. He was booed and heckled while inspecting security arrangements for the funeral.

Local residents blamed the police chief for not protecting Moise, whose wife Martine was seriously wounded in the gun attack, seemingly carried out by a group of mainly Colombian retired soldiers -- with no injuries to the presidential guard.

So far, more than 20 people have been arrested, most of them Colombians, and police say the plot was organized by Haitians with links outside the country and political ambitions.

But the case remains murky, with many unanswered questions.

Haitians have expressed shock that those who were tasked with protecting the president and his home failed so abjectly to do so. The impoverished Caribbean nation is riddled with crime and powerful gangs -- problems that only got worse under the rule of Moise.

His death has rekindled long-standing tensions between the north of Haiti and the west, where Port-au-Prince is located. Some have even set up barricades on roads leading to Cap-Haitien to keep people from the capital from attending the funeral.

"We are going to do everything we can to honour him the way he deserves, in line with his importance for our city," said Cap-Haitien Mayor Yvrose Pierre.

A Catholic Mass was to be held for Moise Thursday at the city's cathedral, followed by a procession in his honour.

"His assassination saddened me very much. I prayed for his soul. I prayed that justice will be rendered," said a woman standing near the cathedral, who only gave her first name Carine. 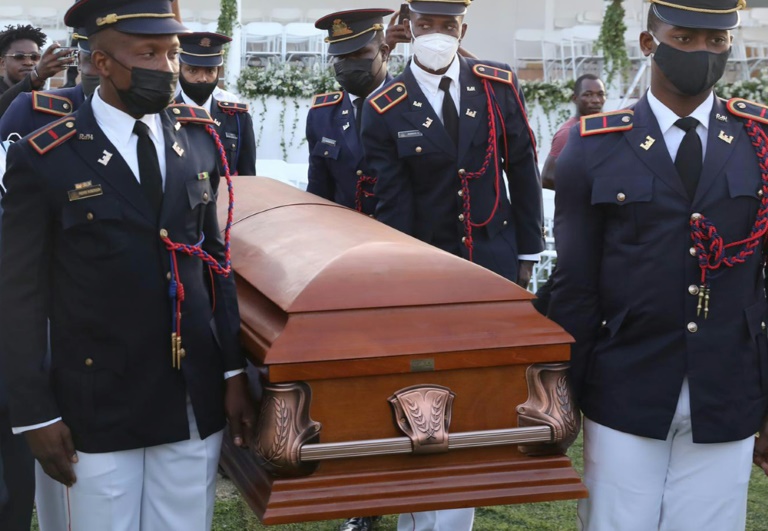 Memorial ceremonies in honor of Moise have been held this week in Port-au-Prince as well.

Attending one of them was new Prime Minister Ariel Henry, who was sworn in Tuesday and vowed to restore order and organize long-delayed elections as sought both by Haitians and the international community.

The State Department on Thursday named a new special US envoy to Haiti tasked with helping to usher along the organization of elections.

For now, the country has no working parliament and only a handful of elected senators. The interim government installed this week has no president.

US Secretary of State Antony Blinken called Henry on Thursday to express Washington's "commitment to supporting the Haitian people following the heinous assassination" of Moise.

Blinken also "emphasized the importance of establishing the conditions necessary for Haitians to vote in free and fair legislative and presidential elections as soon as feasible."

France also put out a statement Thursday calling for legislative and presidential elections to be held "as soon as conditions allow it."

Moise had ruled Haiti, the poorest country in the Americas, by decree after legislative elections due in 2018 were delayed in the wake of multiple disputes.

As well as presidential, legislative and local elections, Haiti had been due to have a constitutional referendum in September after it was twice postponed due to the coronavirus pandemic.