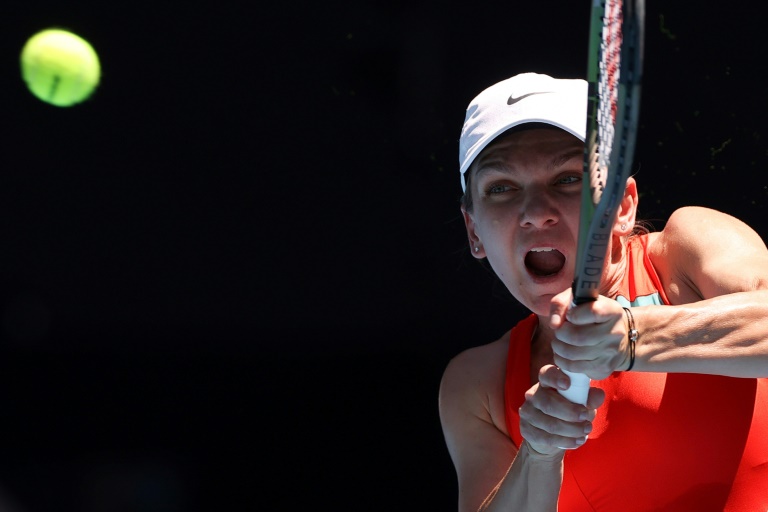 Simona Halep hits a return on her way to the last 16 of the Australian Open with a 6-2, 6-1 demolition of Danka Kovinic. AFP/Martin Keep

The two-time Grand Slam winner drew on all her experience to sweep past the 98th-ranked Montenegrin 6-2, 6-1 in the third round on John Cain Arena and ensure her participation in the second week for a fifth consecutive year.

She will now play French veteran Alize Cornet, who beat Slovenia's 29th seed Tamara Zidansek 4-6, 6-4, 6-2 on the back of her stunning upset of world number three Garbine Muguruza in round two.

"I feel great that I can play the fourth round again. I always love to play in Australia so that's why maybe I play good matches," said Halep.

"Close (to my best level). I feel like I played great, she was a little bit tired, she had a tough match before me, but it is always a big challenge to step on to this court and give your best

"I am really pleased with the way I played and I am looking forward to the next one."

The fit-again Romanian came into the tournament full of confidence after her first title in 16 months at the Melbourne Summer Set and was always in charge against Kovinic, who upset US Open champion Raducanu in round three.

Seeded 14, Halep has been in insatiable form this week, dropping just nine games in her opening two matches, and she carried it into her clash against the 27-year-old.

She raced through the first set and broke early again in the second to steamroll through to a showdown with Cornet, who battled back from a set down in her match.

"It was mostly about survival," said Cornet.

"The Australian heat is brutal and I can't believe I won."