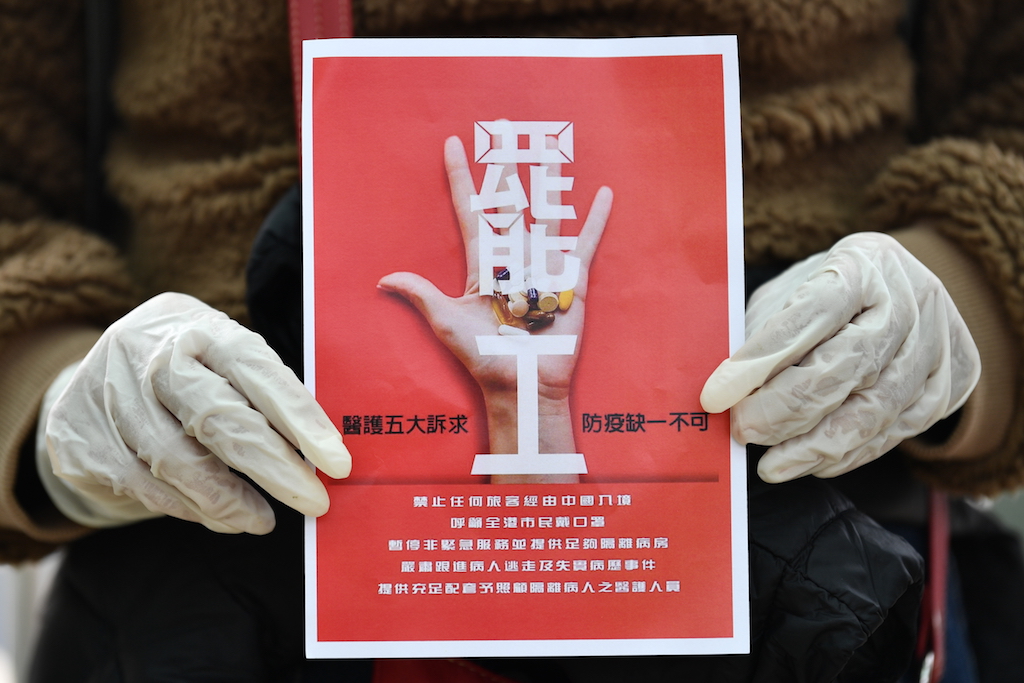 A local medical worker holds a placard reading "strike" as medics demand the city close its border with China to reduce the coronavirus spreading.

HONG KONG - Hundreds of Hong Kong medical workers walked off their jobs on Monday, demanding the city close its border with China to reduce the coronavirus spreading -- with frontline staff threatening to follow in the coming days.

The financial hub has 15 confirmed cases of the disease, many of them brought over from the Chinese mainland where the epidemic began and has so far killed more than 360 people.

Authorities have argued that doing so would be discriminatory, economically damaging and go against advice from the World Health Organization.

Instead, the city government has closed down some crossings and says arrivals from the mainland have dropped significantly.

But there is growing public anger in a city that maintains a deep historical mistrust of the mainland after the 2003 SARS outbreak -- which was initially covered up by Beijing -- killed nearly 300 Hong Kongers.

INFOGRAPHIC: Protect yourself from Coronavirus

"If there is no full border closure, there won't be enough manpower, protective equipment, or isolation rooms, to combat the outbreak," Winnie Yu, chairwoman of the 9,000 member Hospital Authority Employees Alliance, told reporters.

Talks with the government broke down on Sunday after the union said city leader Carrie Lam had decided to not attend discussions in person.

The Hospital Authority, which employs some 75,000 people, said it sympathised with calls to lower the risk of new infections but was opposed to industrial action, saying patients would suffer.