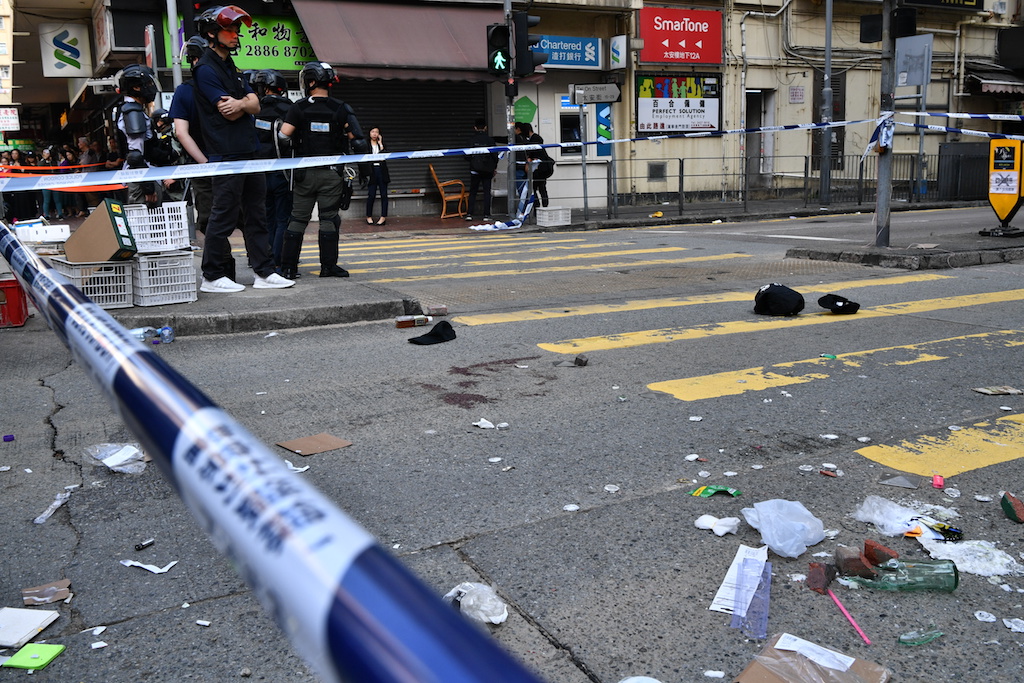 A pool of blood could be seen near at the site where pro-democracy protesters were shot by a policeman in Hong Kong.

HONG KONG - A Hong Kong police officer shot at masked protesters on Monday morning, hitting at least one in the torso, as anger sparked by the recent death of a student spilled into the rush hour commute.

The shooting, which was broadcast live on Facebook, is the latest escalation in more than five months of seething pro-democracy protests that have engulfed the international financial hub and battered its reputation.

Footage showed a police officer drawing his sidearm in the district of Sai Wan Ho as he tried to detain a masked person at a junction that had been blocked by protesters.

Another masked individual then approached the officer and was shot in the chest area, quickly falling to the ground, clutching their left side.

Seconds later, two more live rounds were fired by the officer during a scuffle and another masked protester went to ground, although the footage was less clear as to whether he was struck.

Police then detained the two people on the ground.

A pool of blood could be seen near the first individual whose body initially appeared limp, although the person was later filmed conscious and even trying to make a run for it.

The second man was conscious, shouting his name to reporters as he was handcuffed.

A police source, speaking on condition of anonymity, confirmed to AFP that live rounds were fired at more than one protester in Sai Wan Ho and that a statement would be issued.

Hospital authorities said three people were admitted from the incident, one with a gunshot wound.

Tensions have soared in recent days following the death on Friday of a 22-year-old student who succumbed to injuries sustained from a fall in the vicinity of a police clearance operation the weekend before.