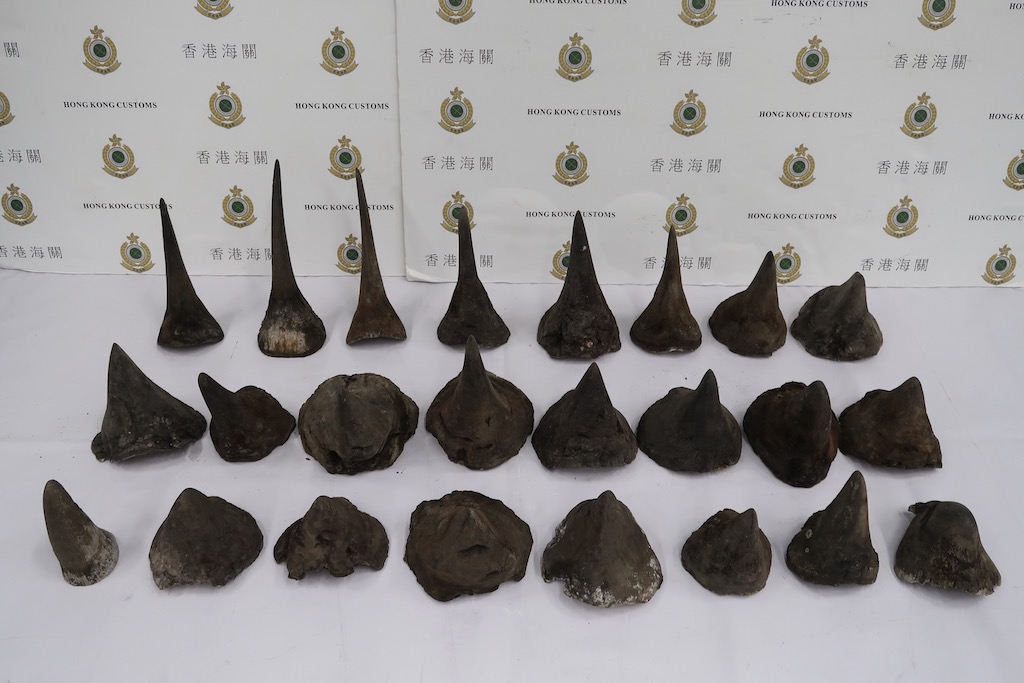 Hong Kong customs officers have arrested two men carrying 40kg of rhino horn through the city's airport in what they said was a record seizure for rhino contraband smuggled by air passengers.

HONG KONG - Two men carrying at least 24 severed rhino horns were arrested in Hong Kong airport by customs officers who said it was their largest ever seizure of rhino contraband smuggled by air passengers.

The haul -- worth some HK$8-million ($1-million) -- was transported brazenly through the terminal in two cardboard boxes, the customs department said.

The pair had arrived from Johannesburg and were planning to transit to Vietnam's Ho Chi Minh City, according to a statement from the department, which did not give their nationalities.

An environmental group in Hong Kong said the 40kg of horn was a major bust -- accounting for 20 percent of the total amount of rhino horn seizures in the city in the last five years.

Sophie le Clue, environment programme director of ADM Capital Foundation, said there was likely an organised network behind the trafficking.

"What I would like to see is less seizures and more of those who are responsible for crimes in the court -- and not just the people who are carrying it," she told AFP.

Local conservation groups have long called on Hong Kong to do more to crack down on illegal wildlife smuggling by ending legal loopholes and lenient sentences.

Demand for rhino horn is primarily fuelled by consumers in China and Vietnam where it is advertised by some traditional medicine practitioners as a wonder ingredient.

In reality, rhino horn is a nostrum, comprised of little more than keratin, the same protein that makes human hair and fingernails.

Nonetheless, horn can fetch up to $60,000 per kilogram in Asia, stoking lucrative transnational crime networks that have decimated rhino populations in recent decades.

South Africa, which is home to about 80 percent of the world rhino population, has been hit hardest. In 2018, 769 rhinos were poached in South Africa alone.

More than 7,100 animals have been killed over the past decade.