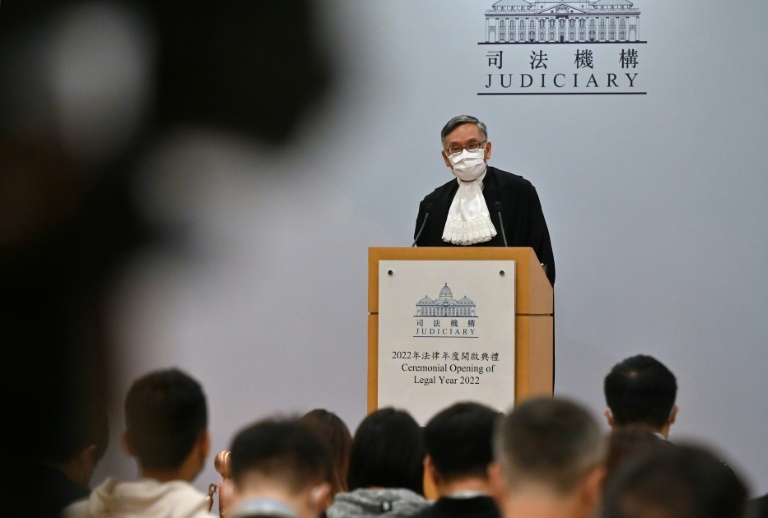 Semi-autonomous Hong Kong owes much of its success to a transparent and internationally respected common law legal system, which stands in stark contrast to opaque, Communist Party-controlled courts in mainland China.

But the system has come under sustained pressure since massive democracy protests in 2019, with Beijing enacting a contentious national security law to quash dissent that critics say is incompatible with Hong Kong's legal traditions.

A key aspect of the security law is that instead of the usual trial by jury, national security cases are decided on by judges selected by Hong Kong's leader.

During the ceremonial opening of the 2022 legal year on Monday, top judge Andrew Cheung said justices presiding over national security cases were impartial and the heightened scrutiny of Hong Kong's rule of law was unwarranted.

"When such attention and comments are not based on objective facts and rational arguments, but rather on surmises, political stances or geopolitical considerations, they are of no value to the advancement of the rule of law in Hong Kong or the upholding of judicial independence," he said.

Criticisms of court decisions without first "understanding the reasons... are as meaningless as they are hollow. So is any unsubstantiated doubt over the courts' independence," he added.

"Judicial independence in Hong Kong exists as a fact."

But Cheung declined to disclose how many judges Hong Kong leader Carrie Lam has so far appointed to national security cases, or reveal their identities.

Judges have found themselves in the firing line in Hong Kong's polarised politics, including some who have had private information leaked online.

Both democracy supporters and government loyalists have criticised rulings they dislike and some pro-Beijing figures have called for an overhaul of the judiciary.

More than 160 people have been arrested under the national security law, including activists and journalists from pro-democracy news outlets.

Often denied bail, many suspects have been detained for long periods before trial.

Last week the American Chamber of Commerce in Hong Kong released a survey that showed 68 percent of respondents said their confidence in the rule of law had fallen in the last year.