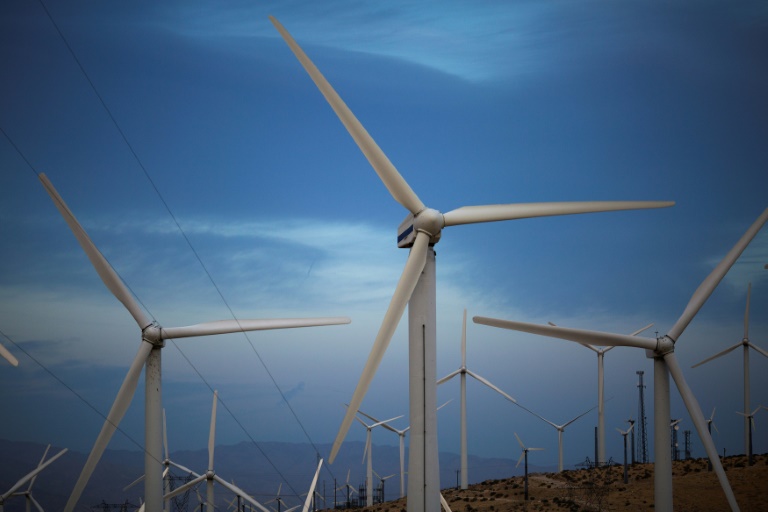 WASHINGTON - It's no coincidence US President Joe Biden chose manufacturing hub Pittsburgh to unveil his $2 trillion green infrastructure plan, a bold pitch to Americans used to hearing that climate action will wreck industry.

So how does "The American Jobs Plan" try to place the environment at the heart of America's future economic growth?

Biden has called for the US energy sector to be fully decarbonized by 2035.

To this end, he has asked Congress for $100 billion to invest in the national grid and shift to cleaner energy, as well as a ten-year extension of tax credits for renewable generation and storage.

READ: Joe Biden stumbles as he boards Air Force One

"The tax credit for wind and solar has been quite successful in creating a large scale investment and build out," Dan Lashof, president of the World Resources Institute told AFP, welcoming the extension.

It also foresees a $27 billion "Clean Energy and Sustainability Accelerator" -- in other words a Green Bank to mobilize private investment.

"You are setting smart regulations in place that are providing that long-term market demand for clean energy technologies," she told AFP.

"We think it's one of the best methods to actually get the reductions we're looking for with a level of certainty," she said.

The other major green aspect of the package is an eye-catching $174 billion investment "to win the EV (electric vehicles) market," where the US currently has one-third the market share of China.

This includes establishing incentives to create a network of 500,000 EV chargers by 2030.

READ: 'Takes one to know one' Putin mocks Biden over 'killer' comment

The money will be also be used to spur domestic supply chains for raw materials and parts, and helping factories retool to build both the vehicles and batteries.

Some 50,000 diesel vehicles would be replaced, while at least a fifth of the yellow school bus network would be electrified.

"Globally the market seems to be moving more towards electric vehicles," said Walters, adding the addition of the "right policy landscape" would give the existing trend an extra nudge.

- What do climate experts think? -

For the most part, experts polled by AFP are happy with the proposal.

UC Berkeley scientist Amol Phadke, who authored the noted "2035 report" on transitioning energy said:  "Power and transport are (among) the most important sectors for climate mitigation and this plan is rightfully ambitious on those sectors."

But some climate groups think the US should be spending more.

"But this spending is still way too small to face the climate crisis at scale and it'll take a lot more spending to fully decarbonize the US economy," she added.

The campaign group would like to see a $16 trillion bill and is skeptical of funding carbon capture technology, which it believes represents a free pass to the fossil fuel industry.

Another criticism is that the US hasn't said it will follow the lead of several countries that have announced a phase out of new fossil fuel vehicles.

Senate Minority Leader Mitch McConnell on Thursday vowed Republicans would oppose the plan because of the tax hikes it requires, scuppering Biden's hopes for bipartisan support.

Though most bills require 60 Senate votes to pass, it's possible to pass some using a simple majority of 51, which Democrats have, through certain legislative procedures.

That will still require the buy-in from more fiscally conservative moderate Democrats. 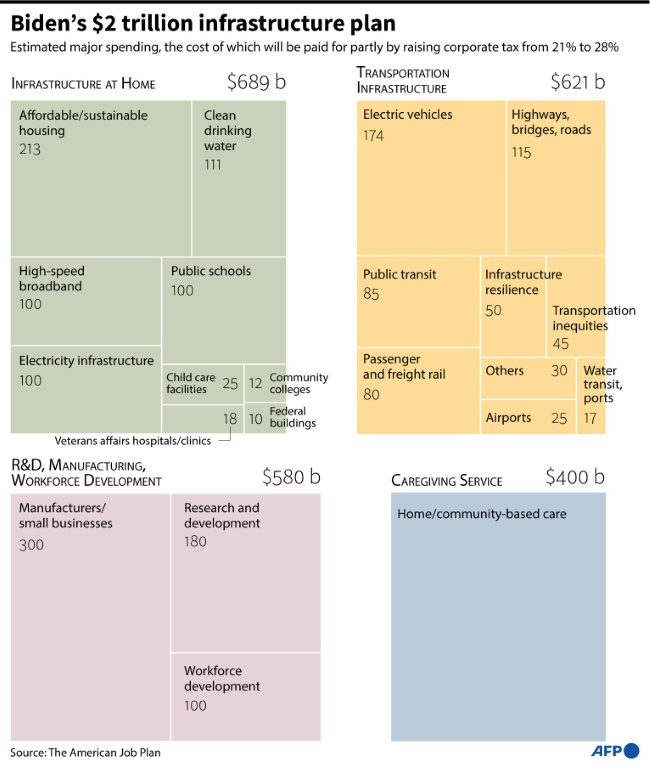 "On the competition side of the ledger, every year that we delay, we're talking about other countries racing ahead to seize the competitive advantage in these incredibly important industries of the future," he added.

By Lucie Aubourg And Issam Ahmed