How definitions drive debates: What we mean by 'water scarcity' 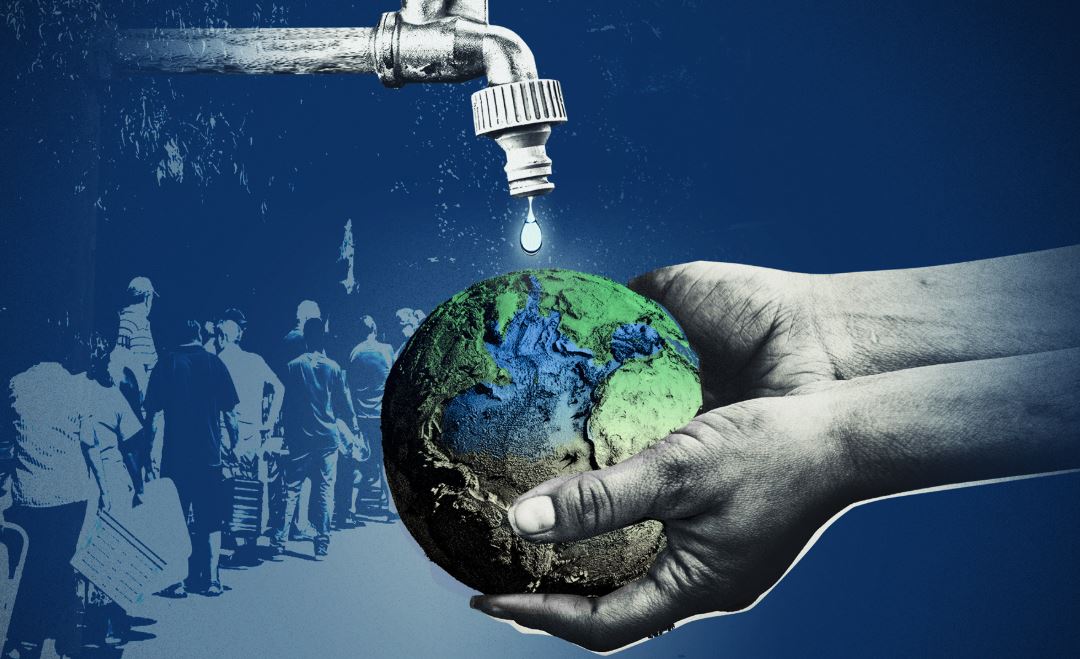 Water: For many of us, it’s a free public resource whose cleanliness and easy access we take for granted. For others, access - or lack thereof - is a life-or-death situation.

The demand for clean, drinkable water is outstripping its finite supply; it’s a crisis in the making. Of all of the water that covers the planet, less than 3 percent is fresh and safe to drink, and the majority of that freshwater is locked in glaciers and ice caps or far below the Earth’s surface. So how can this small fraction reach the world’s 7 billion-plus people? Solutions start with definitions, so here’s a breakdown of key terms we’ll be using throughout our debate on September 10, 2019, when three experts will propose plans for improving water security and accessibility around the world.

Water scarcity refers not just to a physical lack of availability due to natural phenomena—for example, a shortage or dry spell caused by longer-than-expected droughts or the disruption of services by flooding—but also to a lack of access from inadequate infrastructure or poor management. Scarcity can also result from fracking sites in water-stressed regions, or antiquated plumbing and the non-treatment of contaminated wastewater from industrial plants. It can also come from the depletion of groundwater before it has time to restore, and the growing of water-intensive crops and agriculture in dry regions that can’t keep up. Water scarcity can happen naturally, but it can also be caused and compounded by humans.

Water stress is a term used by organizations to describe the ratio of water supply to demand, rather than total measurement of water quantity. More than 2 billion people live in countries experiencing high water stress. Water crisis similarly can refer to a situation where the amount of available drinking water in a region can’t meet the region’s demand. A more specific term you might hear is Day Zero: It was used by the government of Cape Town, South Africa, in late 2017 to indicate the date that taps would run dry and people would need to line up for city-allocated water rations. Cape Town managed to avoid Day Zero—for now—but many major cities, from São Paulo to Beijing, are on a worrisome path to their own Day Zeros and will run out of drinking water if drastic institutional measures are not taken to better manage demand.

Water scarcity—aggravated by global warming—can set off a chain reaction of catastrophe: food and water insecurity causing people to mass migrate to other places and contribute to greater instability, unrest and conflict. Only when water is treated more valuably, as a scarce resource, can sustainable infrastructure be imagined and secured. Singapore, which has no significant independent source of freshwater and has long imported water from its neighbor Malaysia, is a role model in efforts to become water self-sufficient. Beyond collecting rainfall, reusing water more efficiently, and desalinating seawater, the country has incorporated legislation, enforcement, public education and research to synergise its infrastructure. Holistic and innovative approaches to water management are meant to prevent crises by meeting the rising demand for water.

As we approach our September 10 debate in Cape Town, South Africa, on the world’s water crisis, the search for solutions grows more urgent. Bookmark and visit our Twitter, YouTube and Facebook accounts, where the debate will be livestreamed. Join the conversation before and during the debate by using the hashtag #DearWorld, and let us know what a day without water would look like to you.