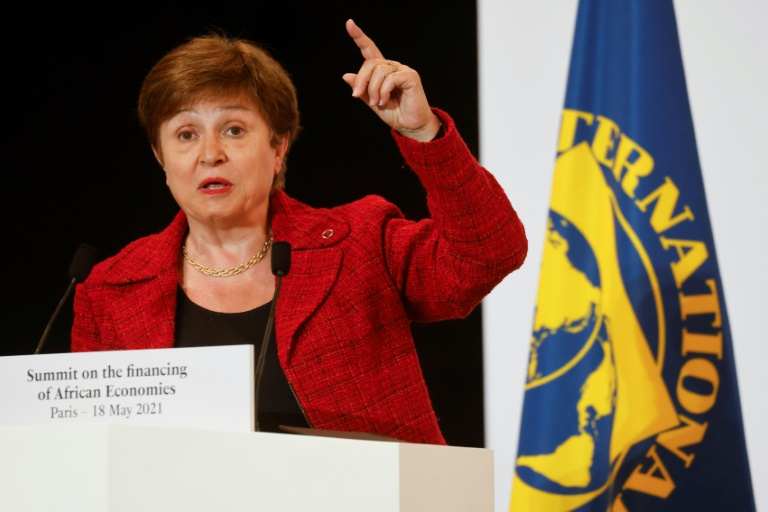 IMF Managing Director Kristalina Georgieva disagreed with an investigation showing she pushed for changes to a World Bank report to favour China. AFP/Pool

WASHINGTON - IMF chief Kristalina Georgieva disputed an independent investigation which found that in her previous job at the World Bank, she pressed staff to alter a report to avoid angering China.

The World Bank announced that it was immediately discontinuing its Doing Business report after the investigation found irregularities in the 2018 and 2020 editions.

The report ranks countries based on their business regulations and economic reforms, and according to the investigation, Beijing complained about its ranking of 78th place on the list in 2017.

The 2018 report would have shown Beijing dropping even further in the ease of doing business ranking.

The Washington-based development lender's staff was preparing it while leadership engaged in sensitive negotiations to increase its lending capital, which required an agreement with top members, including China.

In the final weeks before the report was released at the end of October 2017, the World Bank's then-president Jim Kim and Georgieva, at the time the bank's CEO, met with their staff and asked them to look into updating the methodology in regard to China, according to the investigation by law firm WilmerHale.

Kim discussed the rankings with senior Chinese officials who were dismayed by the country's ranking, and Kim's aides raised the issue of how to improve it, according to the summary of the probe, released by the World Bank.

Georgieva chastised a World Bank senior official for "mishandling the Bank's relationship with China and failing to appreciate the importance of the Doing Business report to the country," according to the report that analysed 80,000 documents and interviewed more than three dozen current and former employees of the lender.

Amid the pressure from upper management, staff changed some of the input data, which boosted China's ranking in 2018 by seven places to 78 -- the same as it was the year prior.

The senior World Bank official said Georgieva then thanked him for "doing his part for multilateralism," the investigation said. Georgieva later visited the home of the manager in charge of the report to retrieve a copy, and thanked them for helping to "resolve the problem."

Georgieva, a Bulgarian national who took the helm of the IMF in October 2019, disputed the investigation.

"I disagree fundamentally with the findings and interpretations of the Investigation of Data Irregularities as it relates to my role in the World Bank's Doing Business report of 2018," she said in a statement.

"I have already had an initial briefing with the IMF's Executive Board on this matter."

Paul Romer, a Nobel Prize winner who served as the World Bank's chief economist at the time, resigned in January 2018 after telling a reporter that the methodology for the ranking had been changed in a way that could give the impression it weighted the results due to political considerations.

At the time, the World Bank strenuously denied any political influence over the rankings.