BRUSSELS - Accelerated vaccinations and a flood of government spending, especially in the United States, have boosted the outlook for the global economy, but more must be done to prevent permanent scars, the IMF said on Tuesday.

The International Monetary Fund's World Economic Outlook now sees global growth of 6.0 percent this year after the contraction of 3.3 percent in 2020 caused by the COVID-19 pandemic -- the worst peacetime downturn since the Great Depression a century before.

Rapid government responses, including $16 trillion in public funds, prevented a much worse outcome, a collapse that could have been "at least three times as large," IMF chief economist Gita Gopinath said.

The United States, which deployed another $1.9 trillion last month, is expected to grow by 6.4 percent, among the fastest expansions in the world and 1.3 points higher than the January forecast.

Meanwhile, China's economy, one of few that grew last year, will expand 8.4 percent in 2021, the IMF said.

The Euro Area too will see GDP expand 4.4 percent, slightly better than the prior forecast.

Gopinath said "even with high uncertainty about the path of the pandemic, a way out of this health and economic crisis is increasingly visible."

However, she stressed that the health crisis remains the critical factor in the economic recovery, and the slow rollout of vaccinations in many developing countries risks not just a worsening COVID-19 outbreak, but also a more troubling future for those nations. 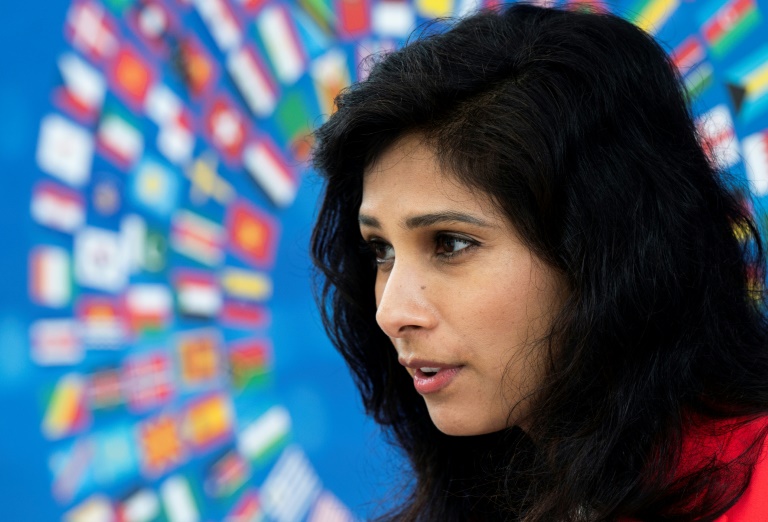 "The outlook presents daunting challenges... and the potential for persistent economic damage from the crisis," she said in the forward to the report, again warning against withdrawing support too soon.

"Without additional efforts to give all people a fair shot, cross-country gaps in living standards could widen significantly, and decades-long trends of global poverty reduction could reverse," Gopinath said.

She told reporters that governments must be mindful of rising debt and deficits, and use a "tailored approach which is specific to where they are in terms of the speed of their recovery."

And because the pandemic "has gone on for much longer than one might have expected" governments should target their scarce resources.

In order to capture more revenues for their coffers, the IMF is "very much in favor of a global minimum corporate tax," Gopinath said.

A day after US Treasury Secretary Janet Yellen called on G20 countries to adopt a minimum tax, Gopinath noted the "large amount" of tax avoidance with "countries sending money to tax havens."

"That's reducing the tax base on which governments can collect revenues and do the necessary social and economic spending that's required," she said. "It is a big concern of ours."

G20 finance ministers are expected to discuss the issue when they meet, virtually, on Wednesday.

As the pandemic caused business and trade shutdowns, the IMF calculates that an additional 95 million people are expected to have entered the ranks of the extremely poor in 2020, and there are 80 million more undernourished than before.

"Averting divergent outcomes will require, above all, resolving the health crisis everywhere."

That demands international cooperation to ensure widespread vaccination campaigns to address the "deeply iniquitous" vaccine access, where rich countries are scooping up the bulk of the supply.

While the United States is expected to surpass its pre-pandemic GDP level this year, and China did so last year, many others will not hit that threshold until 2022 or well into 2023 for developing nations.

The IMF urged policymakers to safeguard the recovery through policies to support firms, including ensuring an adequate supply of credit and providing workers with wage support and retraining.

That also calls for resources to help children who have fallen behind in their education during the pandemic, the fund said.