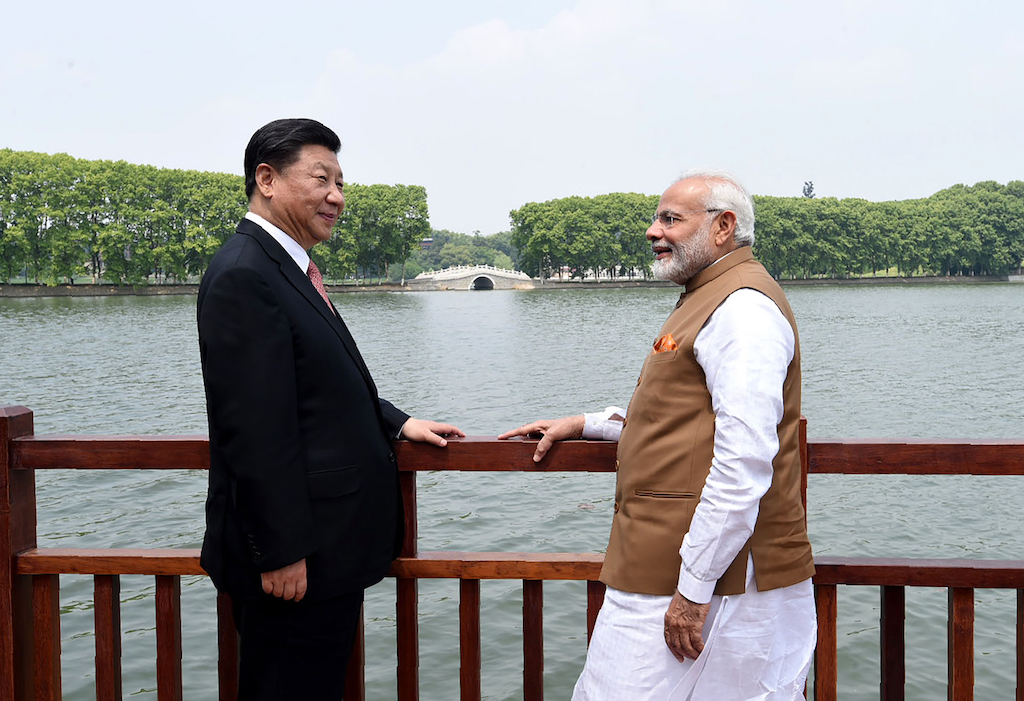 These include Chinese anger at India's August move to split Jammu and Kashmir (J&K) state into two and at Indian military exercises in Arunachal Pradesh state, part of which Beijing claims. China has also irked India with its recent diplomatic support for Pakistan.

China's foreign ministry had thundered in August after the Kashmir decision, which will see the Ladakh region of J&K become a separate Indian administrative territory, that India had "continued to undermine China's territorial sovereignty by unilaterally changing its domestic law".

Beijing claims parts of Buddhist-dominated Ladakh, perched on a steep Himalayan border with China's restive Xinjiang to its north and Tibet to the east. India too says that part of Ladakh that is under Chinese control is its.

Last month Indian and Chinese troops engaged in what Indian media called a "scuffle" in Ladakh on the banks of the Pangong Tso lake, two-thirds of which is controlled by China, and where soldiers threw stones at each other in August 2017.

That incident coincided with a much more serious face-off in the Doklam plateau in the Himalayas claimed by both China and Bhutan, when Chinese soldiers started building a road and India sent its forces to halt the process.

The Doklam face-off between the nuclear-armed Asian nations, who fought a war in 1962, lasted two months until both sides pulled back.

India recently upgraded its participation in the Quad - a grouping with the United States, Australia and Japan that Washington hopes will counter China in the Asia-Pacific region.

Modi and Xi appeared to patch things up in April 2018 in the Chinese city of Wuhan, and the new meeting is billed as a push to build on that gathering.

"Since the meeting between the leaders of the two countries last year, China-India relations have developed at a good pace. The two sides have steadily promoted cooperation in various fields and properly dealt with differences and sensitive issues," Chinese foreign ministry spokesman Geng Shuang said Tuesday.

But India has also objected to Beijing's Belt and Road initiative, a vast global infrastructure programme that includes a major project through Pakistan-administered Kashmir, a territory claimed by New Delhi.

India and Pakistan have fought two wars and numerous skirmishes over Kashmir, most recently in February with tit-for-tat air strikes, and New Delhi accuses Islamabad of backing an armed uprising in the Indian-controlled part of the Himalayan region.

China has given Islamabad diplomatic backing at the United Nations over Kashmir and Pakistani Prime Minister Imran Khan was welcomed with a guard of honour in Beijing on Tuesday at the start of a two-day visit, likely further irking New Delhi.

"China sympathises and supports the situation faced by Pakistan on this issue. So, at present, the relationship between China and India has reached a very delicate point," said Cheng Xiaohe at the Department of International Politics at Renmin University.

India and China, home to more than a third of humanity, also have differences over trade, with both wanting greater market access, even if they share a common adversary in US President Donald Trump.

Xi, 66, was expected to press Modi, 69, to allow Chinese telecoms giant Huawei to take part in 5G trials, something which Washington has been pressing New Delhi not to permit because of security concerns.

"Frankly, the optics surrounding this visit don't look very promising at the moment," Harsh Pant, an international relations professor with King's College in London, told AFP. "If at all, the dynamic has become more conflictual."

After India, Xi was due to make a state visit Nepal on Saturday and Sunday, the first by a Chinese president in more than two decades. India is also worried about losing influence to China there.