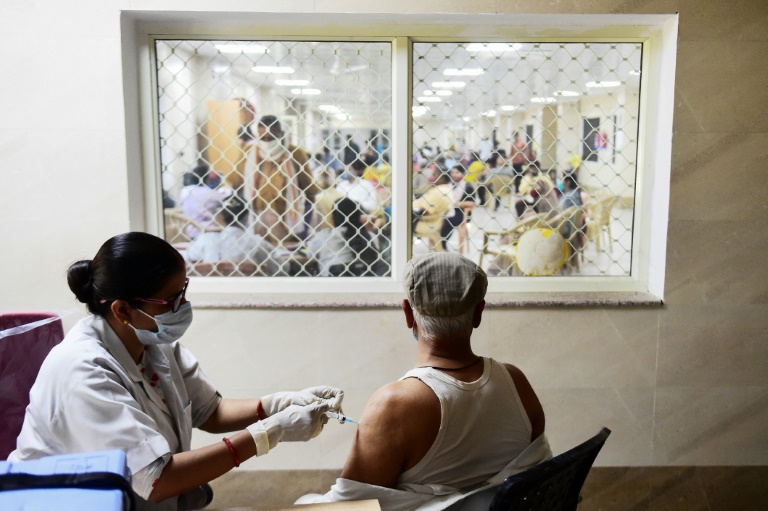 MUMBAI - India on Thursday expanded its coronavirus vaccination drive to the 45-60 age group as the country tries to tackle a surge in new infections.

Public and private centres offering jabs would be open every day throughout April including on public holidays in a "significant step to exponentially expand the countrywide vaccination drive", the health ministry said.

READ: Discovery in talks with government over vaccination rollout

The increased urgency follows a rise in cases since early February -- when new daily infections dropped below 9,000 -- to more than 72,000 on Thursday, the highest level since October.

Experts have warned that infections are increasing at a faster pace compared to last year when single-day cases peaked at almost 100,000 in September.

India has administered more than 65 million vaccination shots to the elderly and other vulnerable groups but at a pace too slow to hit the government's ambitious target of inoculating 300 million people by the end of July.

The state worst hit by the virus has been Maharashtra, home to the country's financial capital Mumbai.

At a makeshift hospital at Bandra Kurla Complex in Mumbai, the number of coronavirus patients admitted had jumped to 940 from 180 three weeks ago, its director Rajesh Dere told AFP.

He said the complex, also the site of one of Mumbai's key vaccination centres, was increasing staffing and its opening hours.

Bookings for vaccinations are meant to be made via a nationwide government app, but officials at the complex said people could walk in without an appointment.

"There were no hiccups. I didn't register online or via the app, I just came directly to the centre and got the shot," 61-year-old lawyer Ashok Sawant told AFP.

The capital New Delhi has also been experiencing a spike in cases but its zoo reopened to visitors on Thursday, more than a year after it closed its doors.

Hazia Ali, 21, who was visiting Delhi with her family from the neighbouring state of Uttar Pradesh, said they were worried about the virus "but life has to go on".

Housewife Swati Garg, 32, said she brought her children to the zoo as they were bored at home during the school holidays.

"Not many places are open in Delhi so we decided to come here. We are wearing masks and sanitising ourselves so I think we are safe," Garg told AFP.