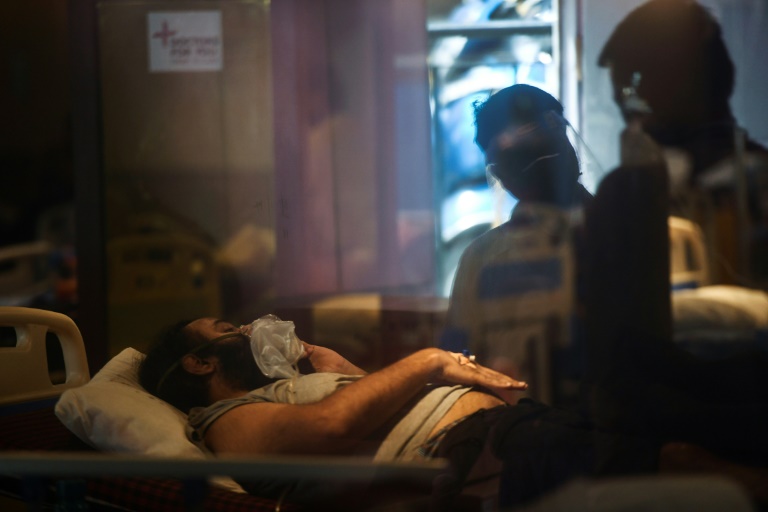 Less than two months ago, the health minister said India was in the 'end game' of the pandemic. AFP/Tauseef Mustafa

MUMBAI - India's devastating COVID-19 surge accelerated further on Saturday with more than 400,000 new cases recorded in 24 hours, as it opened its faltering vaccination programme to all adults.

Indian authorities lowered their guard in the early part of the year after infections fell, lifting restrictions on most activity and allowing mass religious and political gatherings to take place.

Less than two months after the health minister said India was in the "end game" of the pandemic and New Delhi sent millions of vaccines abroad, the surge has sent worried Indians rushing for the jabs still in the country.

Following the recent surge, exports of the AstraZeneca vaccine by India's Serum Institute and of Bharat Biotech's homegrown Covaxin have now been frozen to prioritise India's needs.

Until now, only "frontline" workers like medical staff, people over 45 and those with existing illnesses have been given vaccines.

But even this more modest programme has stumbled, with some areas running out of shots and others throwing them away because of a lack of demand, in part because of the recent surge.

So far around 150 million shots have been administered, equating to 11.5 percent of the population of 1.3 billion people. Just 25 million have had two shots.

On Saturday, the programme was expanded to all Indians over 18, equating to around 600 million people, even though many states said they have insufficient stocks to do so.

Millions of younger people terrified by the current situation and desperate to get inoculated registered on the government's digital platform.