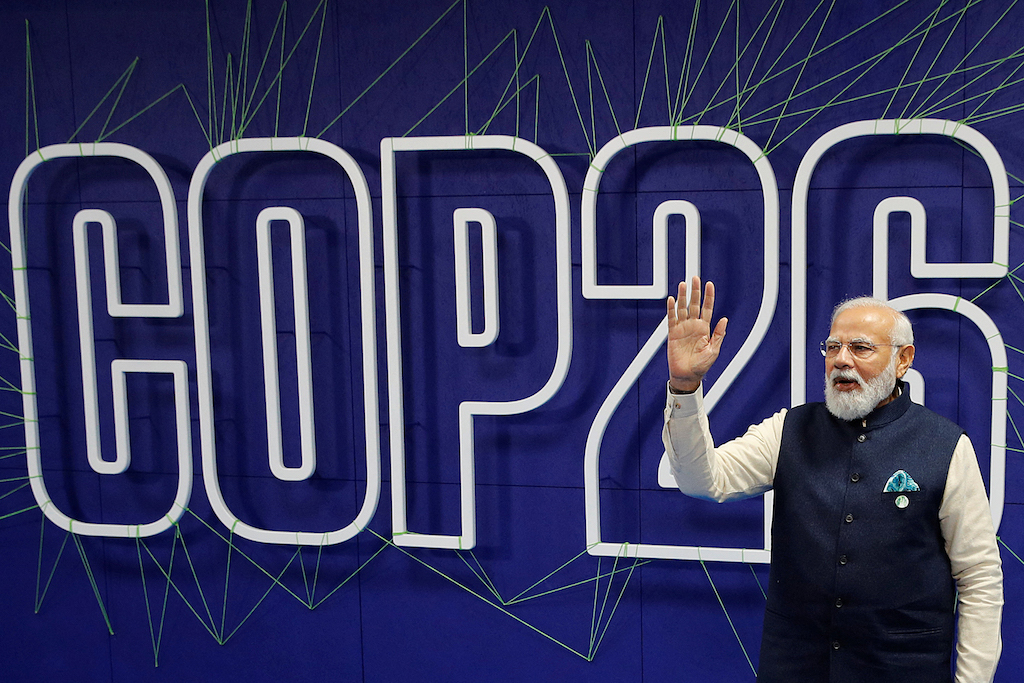 GLASGOW - India's economy will become carbon neutral by the year 2070, the country's prime minister announced at the COP26 climate summit in Glasgow.

"By 2070, India will achieve the target of net-zero emissions," Narendra Modi told more than 120 leaders at the critical talks.

India is the last of the world's major carbon polluters to announce a net-zero target, with China saying it would reach that goal in 2060, and the US and the EU aiming for 2050.

Modi also said India would increase its 2030 target for installed capacity of "non-fossil energy" -- mostly solar -- from 450 to 500 gigawatts.

In addition, 50 percent of the country's energy requirements will come from renewable sources by the same date.

Modi also announced that the carbon intensity of India's economy -- the amount of emissions produced per unit of GDP -- would be reduced by 45 percent by 2030.

The previous goal was 35 percent.

Modi made it clear, however, that emissions-cutting pledges from India and other developing nations would require finance from rich, historic emitters.

Under the Paris Agreement, countries that submitted carbon-cutting plans under the 2015 treaty were to provide updates five years later, by the end of 2020.

India is the only major economy not to have not done so, but Modi's announcement is likely to be formalised in a revised plan, experts suggested.

One key sector where India would aim to lighten its carbon footprint is rail transport.

"Friends, more passengers than the entire population of the world travel by Indian Railways every year," Modi said.

"This huge railway system has set itself a target of making itself 'net-zero' by 2030. This initiative alone will reduce emissions by 60 million tonnes per annum."

On finance, Modi lambasted the failure of rich nations to cough up a promised $100 billion a year by 2020 to help vulnerable nations decarbonise their economies and cope with climate impacts.

"We all know this truth that the promises made to date regarding climate finance have proved to be hollow," he said. "The world ambitions on climate finance cannot remain the same as they were at the time of Paris Agreement."

"It is India's request that developed countries make available one trillion dollars of climate finance as soon as possible," he added, without specifying how such funds should be distributed.

He also called for climate finance flows to be tracked in the same way as progress on reducing greenhouse gas emissions, which is subject to strict monitoring.