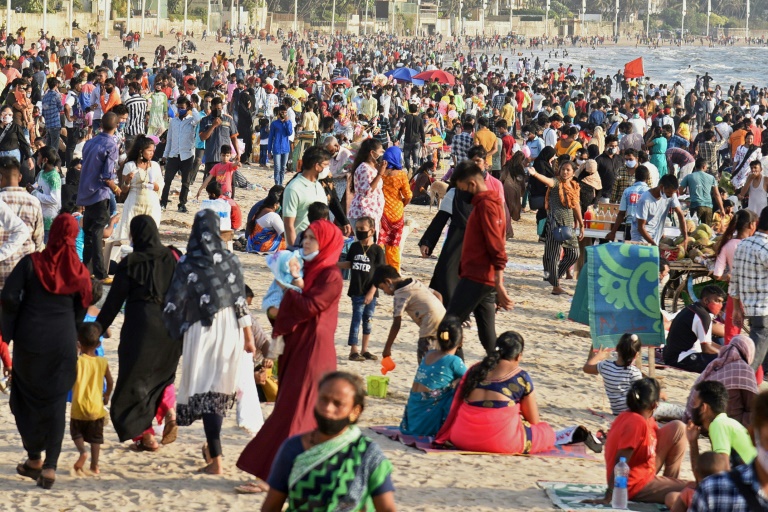 Beaches are crowded in Mumbai, the capital of India's worst-hit state as the country struggles with a new wave of infections

NEW DEHLI - India's worst-hit state ramped up its coronavirus restrictions as nationwide the daily infections exceeded 100,000 for the first time on Monday.

The United States is the only nation that has regularly registered so many cases in one day. Brazil recorded triple digits once in March.

In India, hopes at the start of the year that the outbreak may be subsiding in the vast nation of 1.3 billion people have been dashed in recent weeks as a fresh wave pushed the national total to 12.5 million infections and 165,000 deaths.

Maharashtra, the worst-hit state and home to India's financial and entertainment capital Mumbai, recorded nearly 60,000 cases in the last 24 hours.

Struggling state authorities on Sunday tightened the evening curfew to allow only people involved in essential services out of their homes from 8:00 p.m. to 7:00 a.m.

The region of 110 million people will also see weekend lockdowns, with gatherings of over four people banned and places of worship and restaurants shut.

In Mumbai over the weekend, one of Bollywood's biggest stars, Akshay Kumar, became the latest celebrity to test positive.

On Monday, shooting of the religious epic "Ram Setu" that Kumar was making was halted after 45 crew members also tested positive.

"How long shooting remains halted depends on Akshay Kumar's recovery. We can replace all our crew members, but we cannot replace the star of the film," Ashok Dubey from the Federation of Western India Cine Employees told AFP.

Kumar, 53, tweeted meanwhile that he had been hospitalised "as a precautionary measure under medical advice". 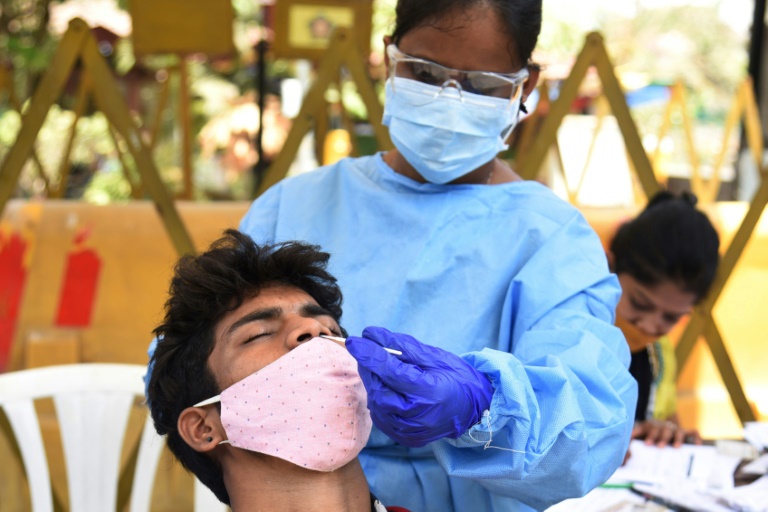 Modi on Sunday chaired a high-level meeting and a statement afterwards announced an awareness campaign from April 6-14 "with emphasis on 100-percent mask usage, personal hygiene and sanitation at public places/workplaces and health facilities."

In the capital New Delhi, the chief minister has ruled out a new lockdown despite the surge in cases. Police say they are issuing more fines to people not wearing masks.

"The fear of COVID-19 has gone away. Most people don't wear masks properly, including many of my passengers," auto-rickshaw driver Surjit Singh, 68, told AFP.

Rajesh Mohan Bindlish, 34, a bank executive in Noida outside the capital, said that police should be stricter but that the government should avoid another lockdown.

"The economy will be hit very hard and it won't be good for all of us. We can't afford to disrupt our economic recovery as so many jobs depend on it," Bindlish told AFP.

"The cases have risen because the people outside became too lax about the entire situation. If fines are increased and there is strictness in their implementation, things will improve," he said.

Last week, it opened up vaccinations to all those over 45 years old to speed up its flagging national inoculation drive.

India is using two shots for its drive, a locally produced version of the Oxford-AstraZeneca vaccine, and Covaxin, which was developed by domestic firm Bharat Biotech.

On Monday, New Delhi-based Panacea Biotec said it had reached an agreement with the backer of the Sputnik V coronavirus vaccine, the Russian Direct Investment Fund, to produce 100 million doses in India each year.