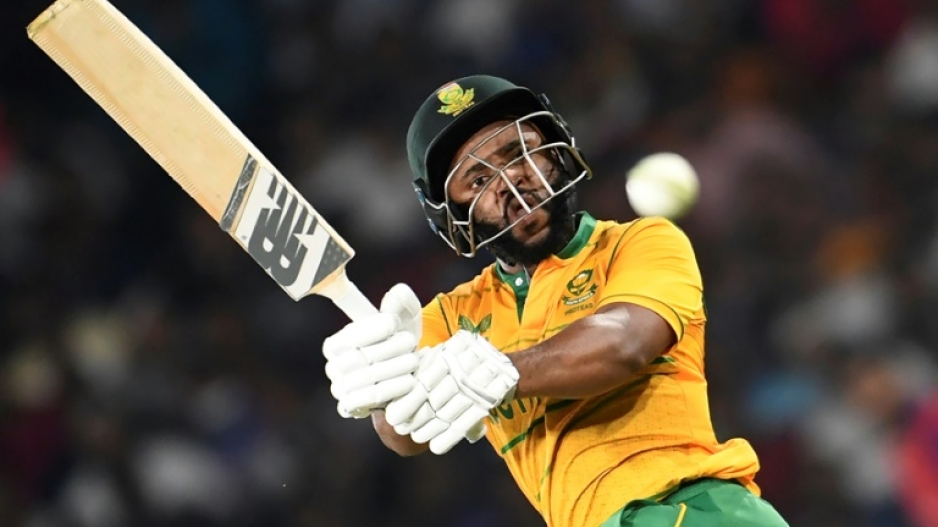 Temba Bavuma made his Test debut in 2014 against the West Indies. AFP/Dibyangshu Sarkar

JOHANNESBURG - South Africa white-ball skipper and Test vice-captain Temba Bavuma has been ruled out of their tour of England which starts next month, Cricket South Africa said on Wednesday.

Bavuma suffered an elbow injury during a recent Twenty20 series in India and needs eight weeks to recover.

South Africa have included Essex off-spinner Simon Harmer in their Test squad after he and Maharaj were the match-winners in a series against Bangladesh last season.

They have picked a strong pace attack, with Anrich Nortje, their fastest bowler, set to make a Test return after missing Tests during the 2021/22 season because of a hip injury.

He joins Kagiso Rabada and tall left-armer Marco Jansen in what could be a potent combination.

South Africa have not won a Test series against the English since 2012 when Graeme Smith guided them to victory in England.

But South Africa are currently second in the world Test championship and had impressive home wins against India and Bangladesh as well as sharing an away series against world champions New Zealand.

England are languishing in seventh place but are coming off a rousing 3-0 clean sweep against New Zealand under the new leadership of captain Ben Stokes and coach Brendon McCullum.

Left-handed batsman Rilee Rossouw, 32, has been selected for the T20 internationals, returning to national colours for the first time since 2016 when he signed a Kolpak contract with Hampshire in England.

Fast bowler Gerald Coetzee, 21, is also in the T20 squad, the only uncapped player across all three squads.