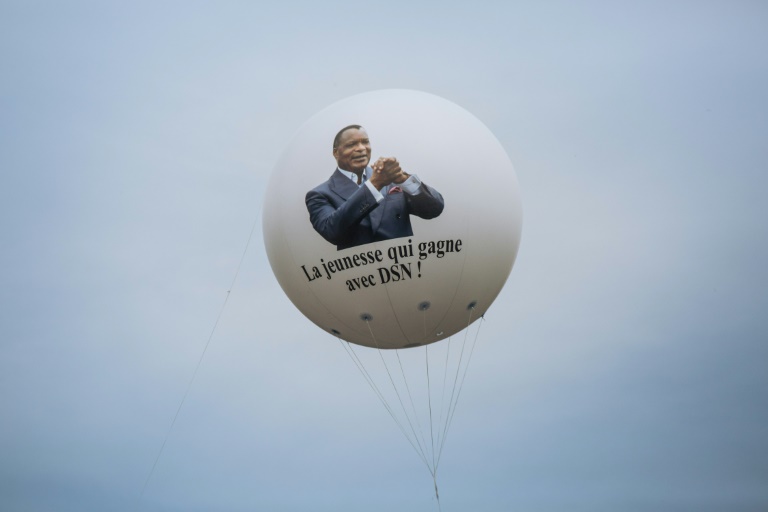 A balloon bearing the picture of Denis Sassou Nguesso. is seen during his last campaign rally in Brazzaville. AFP/Alexis Huguet

BRAZZAVILLE - The Republic of Congo voted on Sunday in a presidential election boycotted by the main opposition and attacked by critics as tilted towards veteran leader Denis Sassou Nguesso.

Access to the internet and social media was cut hours before polls opened at 7am, AFP correspondents said.

The 77-year-old Sassou Nguesso is widely expected to win against six contenders, led by economist Guy-Brice Parfait Kolelas, who revealed on Saturday that he is gravely ill with COVID-19.

Sassou Nguesso, a former paratrooper, first rose to power in 1979 and has since accumulated 36 years in office, making him one of the world's longest-serving leaders.

He is hoping for a first-round victory to secure a fourth term running the central African oil exporter.

Meanwhile challenger Kolelas posted a video message from his sickbed, declaring he was "battling against death" after taking off a respiratory mask.

Kolelas tested positive for COVID-19 on Friday, and is to be transferred to France on Sunday for treatment, his campaign manager Cyr Mayanda said.

The runner-up in 2016's presidential election, Kolelas is the only major candidate remaining to face Nguesso.

Congo's Catholic Church episcopal conference has expressed "serious reservations" about the ballot's transparency and had said on Sunday that it feared an internet shutdown.

About 50 organisations, including Internet Without Borders, had last week appealed to the president to "keep the internet open, accessible and safe during the whole of the 2021 presidential election period".

Unlike in the previous election in 2016, telephone communications were still available on Sunday.