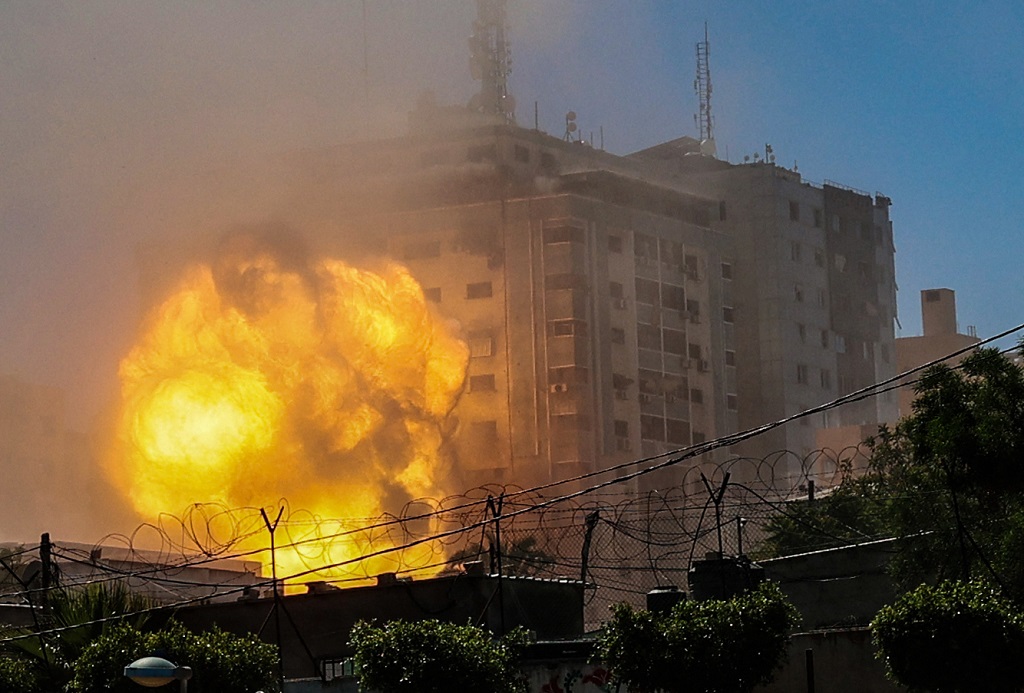 A ball of fire erupts from the Jala Tower as it is destroyed in an Israeli airstrike in Gaza City, controlled by the Palestinian Hamas movement, on May 15, 2021. AFP/Mohammed Abed

Israel "destroyed Jala Tower in the Gaza Strip, which contains the Al Jazeera and other international press offices," Al Jazeera said in a tweet, with an AP journalist saying the army had warned the tower's owner ahead of the strike.

AFP journalists watched the building collapse to the ground after the Israeli air strike, sending up a huge mushroom cloud of dust and debris.

Walid al-Omari, Al Jazeera Jerusalem bureau chief, was incensed and vowed the network will not be silenced.

"Clearly there is a decision not only to sow destruction and killing, but also to silence those who broadcast it," he told AFP.

And speaking on air shortly after the building was obliterated, Al-Omari said the strike wanted "to silence media that are witnessing, documenting and reporting the truth of what is happening in Gaza".

"But this is impossible," he said.

Jawad Mehdi, the owner of the Jala Tower, said an Israeli intelligence officer warned him he had just one hour  to ensure the building was evacuated.

In a phone call with the officer, he begged for an extra 10 minutes to allow journalists to retrieve their equipment before leaving.

"Give us ten extra minutes," he urged live on television, but the officer on the other end of the line refused.

AP journalist Fares Akram wrote on Twitter shortly before the strike that he and colleagues "ran down the stairs from the 11th floor" to get away from the building.

After the air raid, Al Jazeera correspondent in Gaza, Safwat al-Kahlout, pledged in a phone call with the Qatari brodcaster to continue coverage "despite the destruction".

"Suddenly everything became rubble," he said. "We will be on air again with new equipment."

His colleague Harry Fawcett described the strike as "extraordinary".

"This is a very personal moment for all of us. The idea that the place is not there anymore is extraordinary to contemplate," he told the broadcaster.

Israel alleged its "fighter jets attacked a high-rise building which hosted military assets belonging to the military intelligence of the Hamas terror organisation".

"The building also hosted offices of civilian media outlets, which the Hamas terror group hides behind and uses as human shields," it said.

Israeli air and artillery strikes on Gaza since Monday have killed 139 people including 39 children, and wounded 1,000 more, health officials in the besieged coastal enclave say.

Palestinian armed groups have fired 2,300 rockets at Israel, killing 10 people, including a child and a soldier, and wounding over 560 Israelis.

More than half of the missiles fired from the Hamas-controlled Gaza Strip have been intercepted by Israel's air defence system.