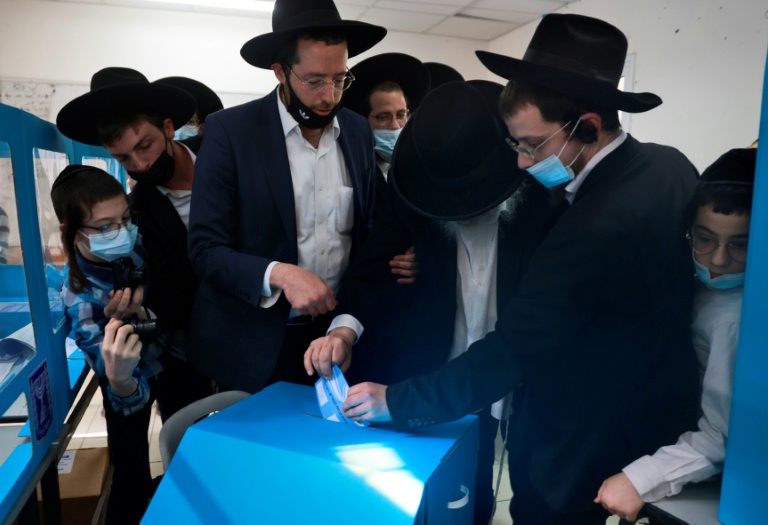 JERUSALEM - Israelis were voting Tuesday in their fourth election in less than two years, with the nation deeply split on whether veteran Prime Minister Benjamin Netanyahu should remain in power.

Election workers in full COVID-19 protective gear staffed polling stations for voters currently in quarantine -- but thanks to a world-leading vaccination effort most citizens wore only face masks.

Netanyahu, 71, is Israel's longest-serving premier and its most popular politician, but his inability to unite a stable governing majority behind him has mired the country in unprecedented political gridlock.

He hopes to be rewarded by voters for the campaign that has inoculated half of Israel's roughly nine million people, a pace envied by much of the world, and for striking historic diplomatic normalisation deals with several Arab states.

But while his right-wing Likud party will likely win the most seats, Netanyahu will need coalition partners to secure a majority in the 120-seat Knesset. 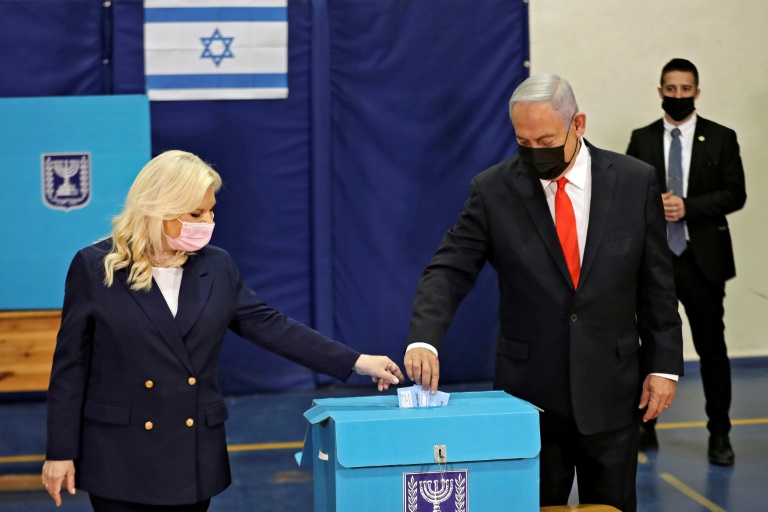 That means Israel is looking at three possible outcomes: another coalition under Netanyahu who has been in power for 12 years, an ideologically divided government united only by its opposition to him, or a looming fifth election.

As he cast his ballot in Jerusalem, Netanyahu voiced hope for an end to the unprecedented period of political crisis, saying: "I hope this is the last election."

"We are burning money and nothing changes." 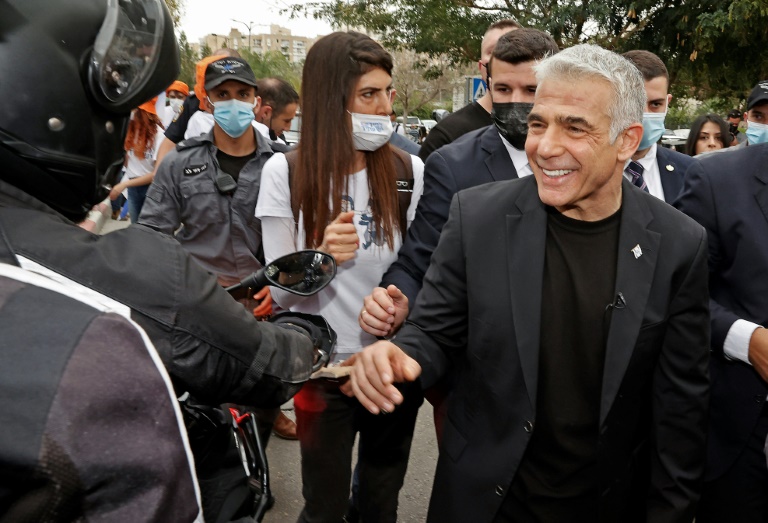 Netanyahu is on trial over corruption charges -- allegations he denies, but which have helped fuel a protest movement with weekly rallies outside his Jerusalem residence.

The premier has said he will not block the trial and is looking forward to being exonerated, but critics suspect that if he earns a majority, he may seek parliamentary action to delay or end the process. 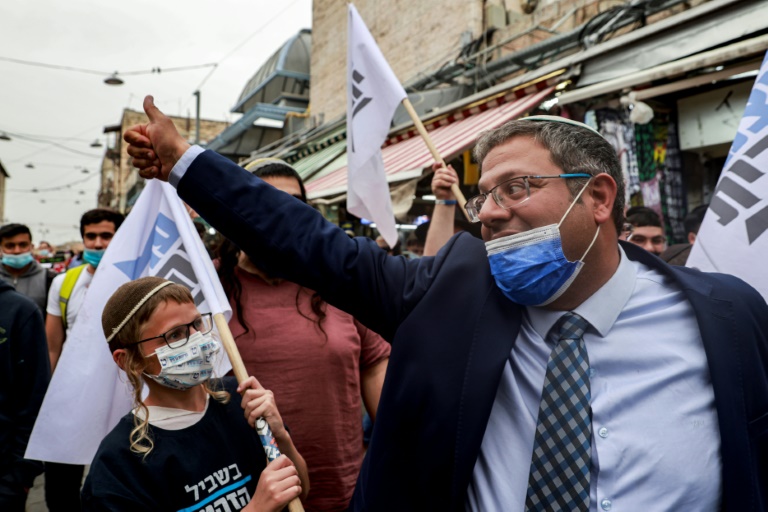 To form a government, Netanyahu would have to strike deals with small factions that control a handful of seats, possibly including a new extremist, far-right alliance called Religious Zionism.

If Religious Zionism crosses the 3.25 percent support threshold, as polls predict, it will send to parliament Itamar Ben-Gvir, who has voiced admiration for the mass-murderer of 29 Palestinian worshippers in Hebron in 1994, Baruch Goldstein.

Even top Likud member and energy minister Yuval Steinitz said it would be improper to sit with Ben-Gvir, who has vowed to secure a prominent role in government before agreeing to join Netanyahu.

"There are only two options: a large Yesh Atid or a government of darkness, racism and homophobia," Lapid said as he voted in Tel Aviv.

Given the right-ward shift of Israeli politics since the turn of the century, Lapid has no evident path to power without support from Netanyahu's rivals on the right.

That includes Likud defector Gideon Saar, whose New Hope party could win up to 10 seats, and who has ruled out joining a Netanyahu-led government.

Lapid would also likely have to align with a staunch ideological rival, religious nationalist Naftali Bennett.

Bennett, a multi-millionaire former tech entrepreneur and one-time Netanyahu protege, has fallen out with the prime minister and hammered him during the campaign, while not ruling out a reunion.

Bennett, whose Yamina party is seen as a likely kingmaker, cast his ballot in the central city Raanana, where he urged Israelis to vote so they can "actually get once and for a all government that cares for the people". 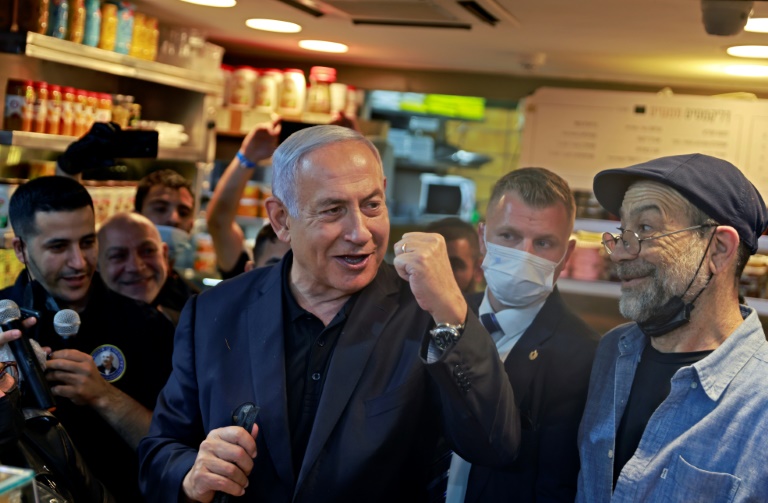 If Netanyahu can't get to 61 seats in this vote and his opponents cannot find common ground, a fifth election in three years is possible

Tuesday's vote was forced on the electorate after Netanyahu triggered the collapse of a unity government he had formed with former military chief Benny Gantz, his main challenger in three previous inconclusive elections.

Gantz, punished by supporters for joining forces with Netanyahu, said he only did so to give Israel stability as the pandemic was intensifying last year.

But their agreement called for Netanyahu to hand power to Gantz after 18 months, something observers of the prime minister correctly predicted he would never do.

If Netanyahu can't get to 61 seats in this vote and his opponents cannot unite, a fifth election is possible. 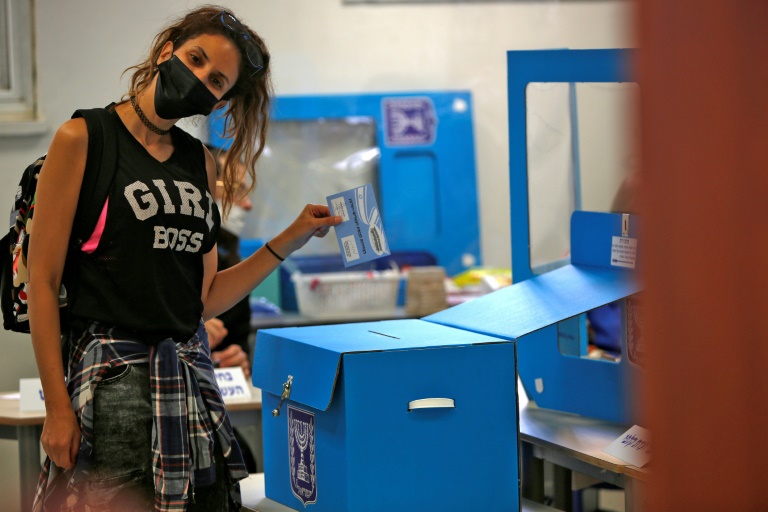 Israel is looking at three possible outcomes: another coalition under Netanyahu who has been in power for 12 years, an ideologically divided government united only by its opposition to him, or a looming fifth election

And, said political analyst Gideon Rahat, that may suit Netanyahu, whose primary objective is to stay in power -- if necessary as a caretaker premier awaiting yet another election.

Netanyahu "can easily go to a fifth, sixth or seventh election", Rahat said.

"I don't have much hope... There are too many small parties, too much ego, they won't agree on anything."