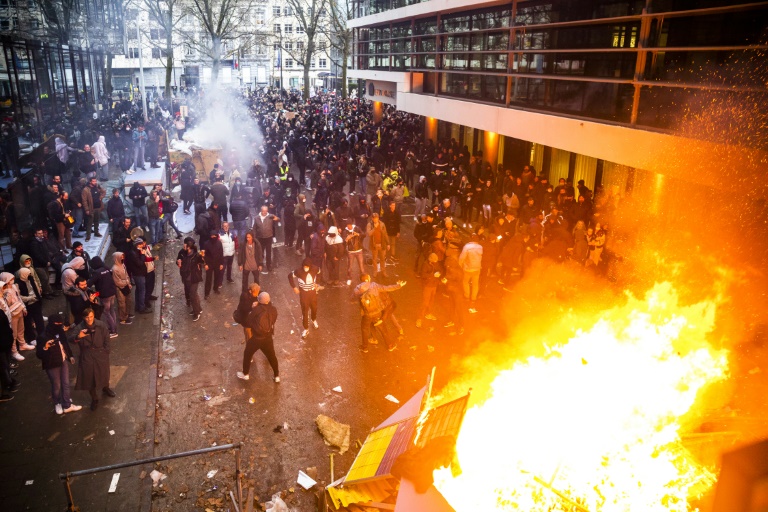 BERLIN - Germans faced the stark warning on Monday that they would be either "vaccinated, cured or dead" from Covid by the end of winter, as Austria took the dramatic step of returning to a partial lockdown.

Belgium and the Netherlands meanwhile condemned the clashes that rocked weekend protests against new anti-Covid measures, meant to contain a surge in infections sweeping parts of the continent.

The anger comes amid growing alarm over Europe's fourth wave of the pandemic, blamed on a sluggish vaccine uptake in some nations, the contagious Delta variant and the colder weather moving people indoors again. 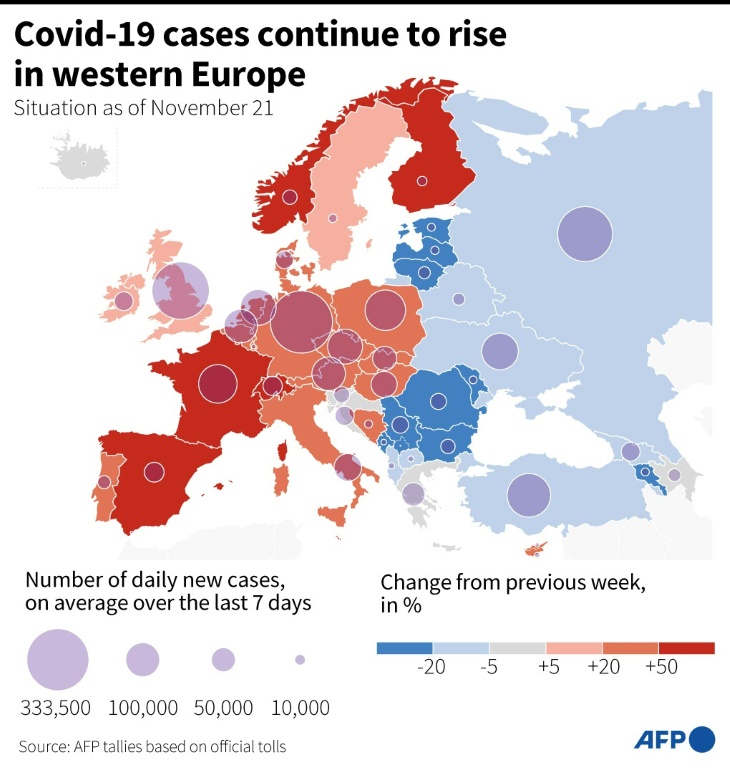 "Probably by the end of this winter, as is sometimes cynically said, pretty much everyone in Germany will be vaccinated, cured or dead," German Health Minister Jens Spahn said, as he urged more citizens to get the jab.

"We have a highly dramatic situation" as new infections "double every 12 days", Merkel told a meeting of leaders of her conservative CDU party, according to participants.

Germany's worst-hit regions have ordered new shutdowns, including the closure of Christmas markets.

The restrictions mirror those in neighbouring Austria, which re-entered a partial lockdown, shuttering shops, restaurants and festive markets from Monday -- the most drastic restrictions seen in Western Europe for months.

Its 8.9 million people are not allowed to leave home with few exceptions, such as going to work, shopping for essentials and exercising as virus cases are surging. 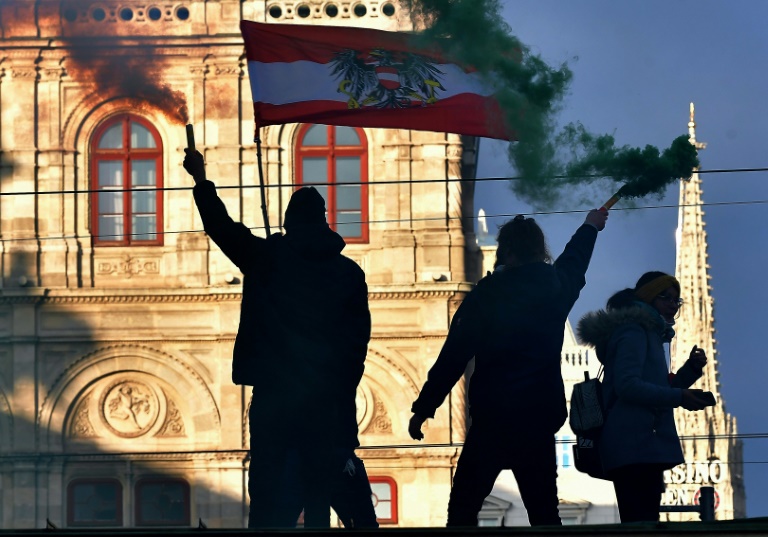 Around 40,000 people marched through Vienna on Saturday

The Alpine nation also plans a vaccine mandate from February 1, one of few places in the world to so far to announce such a move.

Austria's schools and kindergartens remain open, though parents have been asked to keep children at home when possible despite there being no distance learning offered during the three-week lockdown.

One parent, Kathrin Pauser, said she was still dropping off her daughters aged nine and 11, both of whom were recently vaccinated, at school.

"It's a very confusing situation," she told AFP.

Across the border in Slovakia, unvaccinated people were also facing curbs blocking them from entering non-essential stores.

Tens of thousands of demonstrators took to the streets in European cities at the weekend to protest stricter Covid rules, with anger boiling over in some places.

At least 145 people were arrested in the Netherlands over protests that began in Rotterdam on Friday, sparked by a Covid curfew, and spread to cities across the country. Several police officers were injured.

In Brussels on Sunday, officers fired water cannon and tear gas at a protest police said was attended by 35,000, demonstrating against a ban on the unvaccinated from venues such as restaurants and bars. 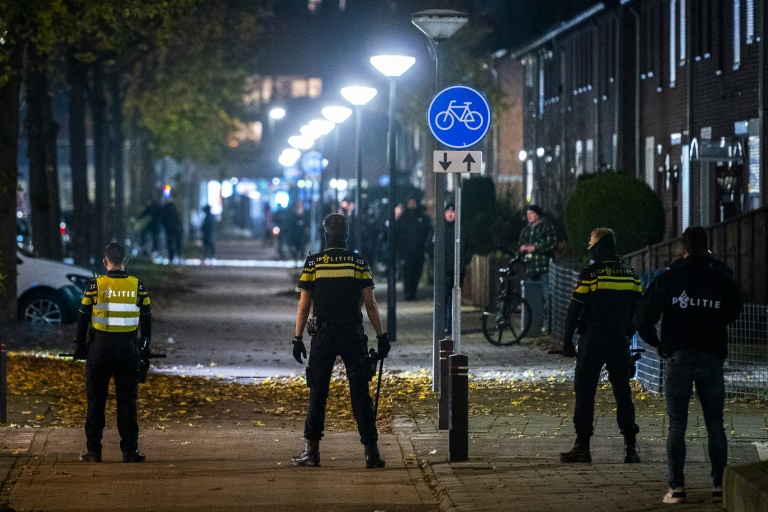 Police lined the streets of the Dutch city of Roermond, where riots erupted

And in Denmark this weekend, around 1,000 demonstrators protested government plans to reinstate a Covid pass for civil servants.

"People want to live," said one of the organisers of the Dutch protests, Joost Eras. "That's why we're here."

A crowd of 40,000 marched through Vienna on Saturday decrying "dictatorship", while some 6,000 people protested in the city of Linz on Sunday.

French troops headed to Guadeloupe on Sunday after a week of unrest over Covid measures, while Prime Minister Jean Castex was set to convene a meeting in Paris with officials from the French Caribbean island.

Roads were blocked Sunday after protesters defying a curfew looted and torched shops and pharmacies overnight, when police made 38 arrests and two members of the security forces were injured.

Austria's decision to reimpose a partial lockdown flies in the face of earlier promises that tough virus restrictions would be a thing of the past.

Over the summer, then chancellor Sebastian Kurz had declared the pandemic "over".

But plateauing inoculation rates, record case numbers and a rising death toll have forced the government to reverse course. 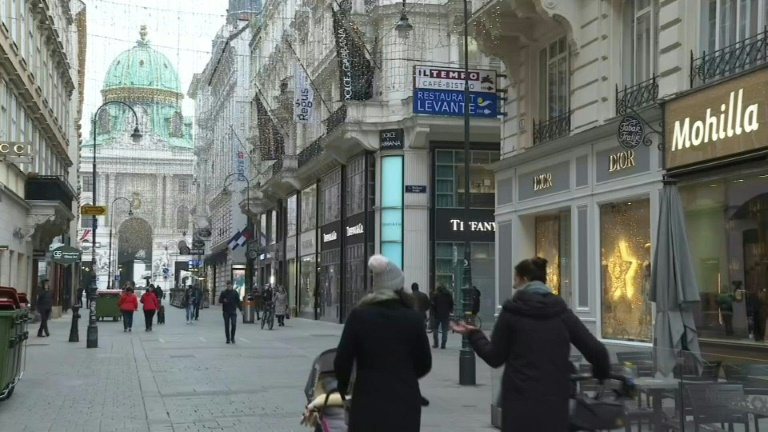 When that proved ineffective at squelching new infections, he announced a nationwide lockdown, with an evaluation after 10 days.

In Germany, the EU's most populous nation, just 68 percent of the population is fully jabbed.

By Michelle Fitzpatrick With Denise Hruby In Vienna