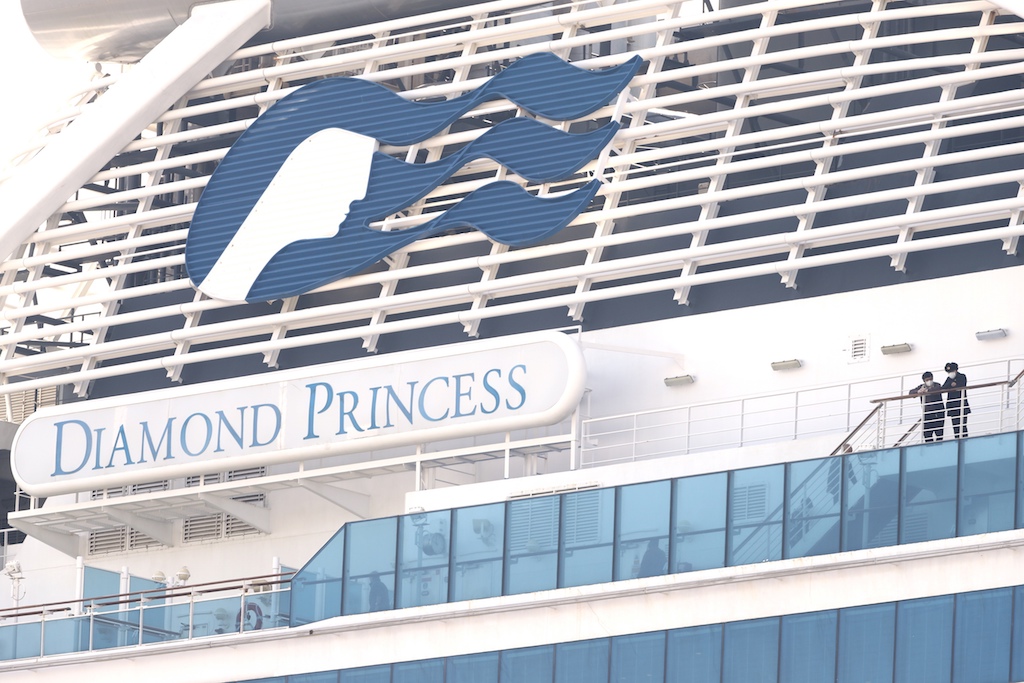 TOKYO - A further 39 people on board the Diamond Princess cruise ship off the Japan coast have tested positive for the new coronavirus, authorities said on Wednesday, as thousands more steel themselves for a second week in quarantine.

The ship that originally had over 3,700 passengers and crew onboard has become the largest single cluster of the newly named COVID-19 disease outside its origin in China, where it has killed more than 1,100 people.

"Out of 53 new test results, 39 people were found positive," Japanese Health Minister Katsunobu Kato told reporters, bringing the total of cases on board to 174. In addition, a quarantine officer was also found to be infected with the virus.

Kato added that: "At this point, we have confirmed that four people among those who are hospitalised are in a serious condition, either on a ventilator or in an intensive care unit."

The Diamond Princess has been in quarantine since arriving off the Japanese coast early last week after the virus was detected in a former passenger who got off the ship last month in Hong Kong.

Those who remain on the ship have been asked to stay inside their cabins and allowed only briefly onto open decks - as long as they wear face masks.

Passengers have also been asked to keep a distance from each other when outside, and given thermometers to regularly monitor their temperatures.

When the boat arrived off Japan, authorities initially tested nearly 300 people of the 3,711 aboard for the virus, gradually evacuating dozens who were infected to local medical facilities.

In recent days, testing has expanded and so far 492 people have been tested, mostly those showing symptoms or who have had close contact with a confirmed positive case.

"Currently we have the capacity to conduct up to 300 tests per day, but we are working... so that by the last day of the incubation period, February 18, we will be able to test up to 1,000," government spokesman Yoshihide Suga told reporters at a regular briefing.

The ship is expected to remain in quarantine until February 19 -- 14 days after the isolation period began. Officials do not expect new cases to affect this schedule.

Aside from the cruise ship, Japan has identified 28 cases, including at least nine from evacuation flights that brought Japanese citizens out of the Chinese city of Wuhan, where the virus originated.

Some of the passengers evacuated from Wuhan are expected to be released soon from self-quarantine -- possibly by Wednesday evening.

Prime Minister Shinzo Abe announced that Japan was expanding its ban on travellers to the province of Zhejiang. Previously, a ban was imposed only on passengers from Hubei region, where the disease originated.

On board the ship, the captain told passengers in a message live broadcast via social media: "This is an ever-changing situation and decisions are being made daily to ensure we are following the latest and best public health guidelines from the authorities."

He apologised for the "periodic service disruptions" to the internet, adding: "Diamond Princess has more bandwidth than any ship in the world and at the same time, more mobile devices than ever before connected on a ship."

British passenger Sally Abel said in a video streamed on Facebook that: "You sit out on the balcony and you hear people coughing all the way along."

"It is nothing like a holiday but it is complete relaxation," she added.

Another passenger on the ship, Yardley Wong, tweeted: "Anxiety uprisen" from the new cases, adding that she did not know when it would be her turn or that of her family.

But another cruiser said the captain's actions were keeping stress levels on board the ship manageable.

"One reason why a panic has not occurred among passengers is the captain's leadership. Regular announcements of information, answering passengers' requests by consulting quarantine officers, walking on the deck, apologising for delayed medicine distribution," the passenger tweeted.

"I want this kind of man to be our country's leader."