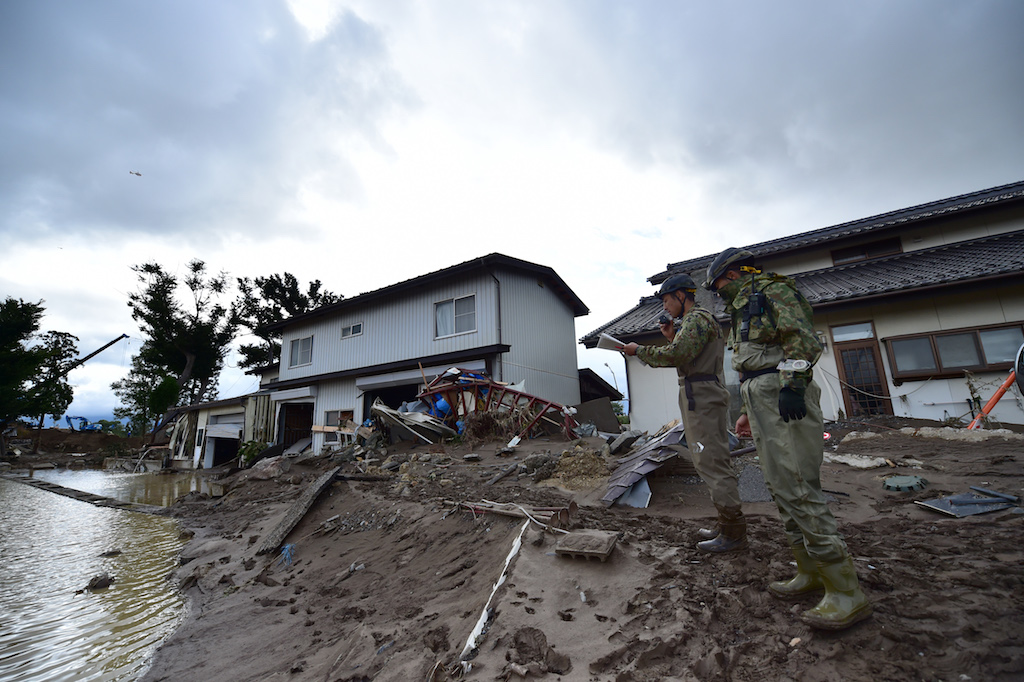 Military personnel patrol a muddy area near where a river burst its banks in Nagano on October 15, 2019, after Typhoon Hagibis hit Japan on October 12 unleashing high winds, torrential rain and triggered landslides and catastrophic flooding.

TOKYO - Rescuers in Japan were working around the clock in an increasingly desperate search for survivors of a powerful weekend typhoon that killed more than 70 people and caused widespread destruction.

Hagibis slammed into Japan on Saturday, unleashing fierce winds and unprecedented rain that triggered landslides and caused dozens of rivers to burst their banks.

By Tuesday night, public broadcaster NHK put the toll at 72, with around a dozen people missing. The government's tally was lower, but it said it was still updating information.

Prime Minister Shinzo Abe said there was no plan to slow rescue operations, with around 110,000 police, coast guard, firefighters and military troops involved.

"Rescue work and searches for the missing are continuing around the clock," Abe told parliament.

"Where rivers flooded, work is ongoing to fix spots where banks broke, and water is being pumped out where floods occurred," he added.

His office said more than 3,000 people were rescued in the wake of the disaster, which affected 36 of the country's 47 prefectures.

Government officials warned that more rain was expected throughout Tuesday in several parts of the country affected by the typhoon.

"We ask people not to drop their guard and to remain fully alert," chief cabinet secretary Yoshihide Suga told reporters.

Hagibis crashed into land packing gusts up to 216 kilometres per hour, but it was the storm's heavy rain that caused the most damage.

Deaths were reported across many prefectures and included a man whose apartment was flooded, a municipal worker whose car was caught in rising waters and at least seven crew aboard a cargo ship that sank in Tokyo bay on Saturday night.

Tens of thousands of people spent Monday night in government shelters, with many unsure when they would be able to return home.