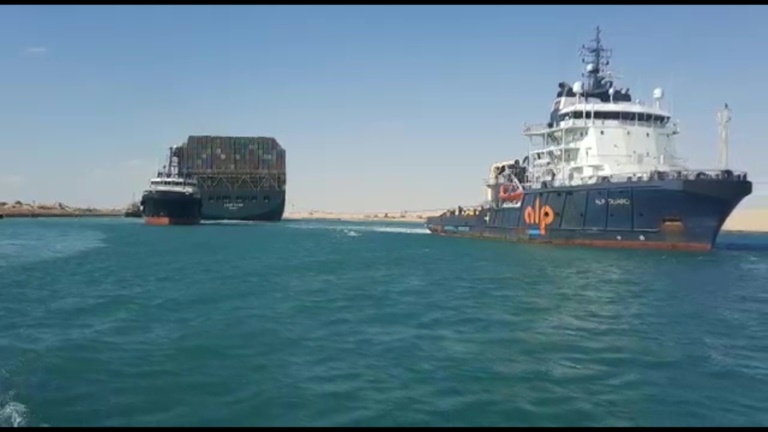 Maritime data company Lloyd's List said the blockage had held up an estimated $9.6-billion worth of cargo each day between Asia and Europe. AFP/Suez Canal Authority

CAIRO - The MV Ever Given was refloated and the Suez Canal reopened to traffic on Monday, sparking relief almost a week after the huge container ship got stuck and blocked a major artery for global trade.

Tugboat crews sounded their foghorns in celebration after the Japanese-owned cargo megaship the length of four football fields was fully dislodged from the banks of the Suez.

World oil prices eased on the news of the reopening of the waterway that connects the Mediterranean and Red Sea and through which more than 10 percent of world trade passes.

The head of the Suez Canal Authority, Admiral Osama Rabie, had around 3pm local time "announced the resumption of shipping traffic in the Suez Canal," the authority said.

The SCA cautioned, however, that it will take more than three days to clear the traffic jams of ships that were stuck at the northern and southern ends of the canal.

In the hours before the ship was dislodged, the tailbacks reached 425 vessels.

Maritime data company Lloyd's List said the blockage had held up an estimated $9.6-billion worth of cargo each day between Asia and Europe.

The crisis forced companies to choose between waiting or rerouting vessels around Africa, which adds 9,000 kilometres and over a week of travel to the trip between Asia and Europe.

In a sign of the knock-on effects from the Suez blockage, authorities in war-wracked Syria said the crisis had hit its fuel imports from Iran and forced it to ration already scarce supplies.

Romania's animal health agency said 11 ships carrying livestock out of the country were also impacted, while the charity Animals International had warned of a potential "tragedy" affecting some 130,000 animals.

Salvage crews have been working around the clock ever since the accident which has been blamed on high winds and poor visibility during a sandstorm, although the canal authority also cited the possibility of human error.