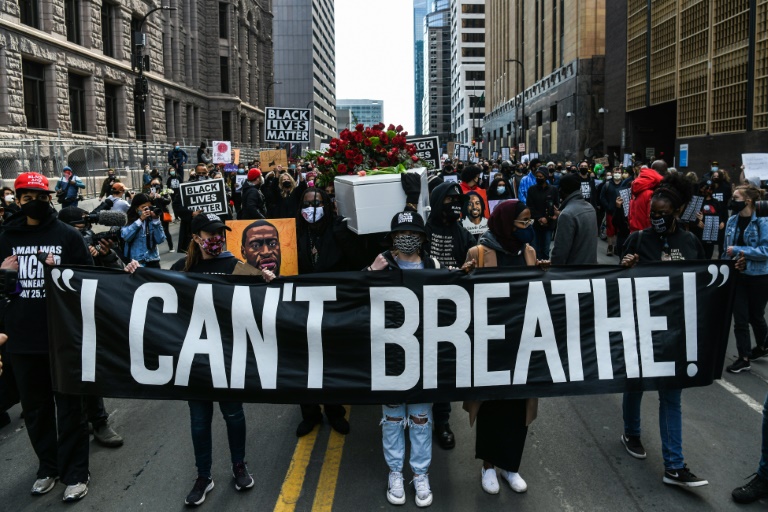 Demonstrators carry a banner reading "I Can't Breathe" during a march in Minneapolis. AFP/Chandan Khanna

MINNEAPOLIS - A jury is to hear closing arguments on Monday in the trial of the ex-police officer accused of murdering George Floyd, a case that laid bare racial wounds in the United States and has come to be seen as a pivotal test of police accountability.

Derek Chauvin, a 19-year veteran of the Minneapolis Police Department, faces a maximum of 40 years in prison if convicted of the most serious charge -- second-degree murder.

Chauvin was seen on video kneeling on Floyd's neck for more than nine minutes as the 46-year-old Black man lay handcuffed facedown in the street complaining he "can't breathe."

The harrowing video, which was shown repeatedly to the jury during Chauvin's three-week trial, sparked protests against racial injustice and police brutality around the world.

Eric Nelson, Chauvin's attorney, said at the opening of the trial that there was "no political or social cause" in the courtroom, but it has coincided with rising tensions from two other high-profile police killings.

With tensions high as a possible verdict nears, two guard members were slightly injured after at least one person opened fire from a car on a team of troops and police early on Sunday in Minneapolis, authorities said.

"The outcome that we pray for in Derek Chauvin is for him to be held criminally liable for killing George Floyd," said Ben Crump, an attorney for the Floyd and Wright families.

Among the 38 witnesses who testified for the prosecution were some of the bystanders who watched Floyd's arrest for allegedly using a counterfeit $20 bill to buy a pack of cigarettes.

Chauvin attended every day of the trial, dressed in a suit and taking notes on a yellow legal pad.

He spoke only once -- and that was out of the presence of the jury -- when he invoked his Fifth Amendment right not to testify in his own defence.

Much of the evidence phase of the trial involved testimony from medical experts about Floyd's cause of death and whether Chauvin had engaged in reasonable or excessive use of force.

A conviction on any of the charges -- second-degree murder, third-degree murder or manslaughter -- will require the jury to return a unanimous verdict.

Two members of the jury will be excused by Judge Peter Cahill after closing arguments and the other 12 will be sequestered for deliberations.