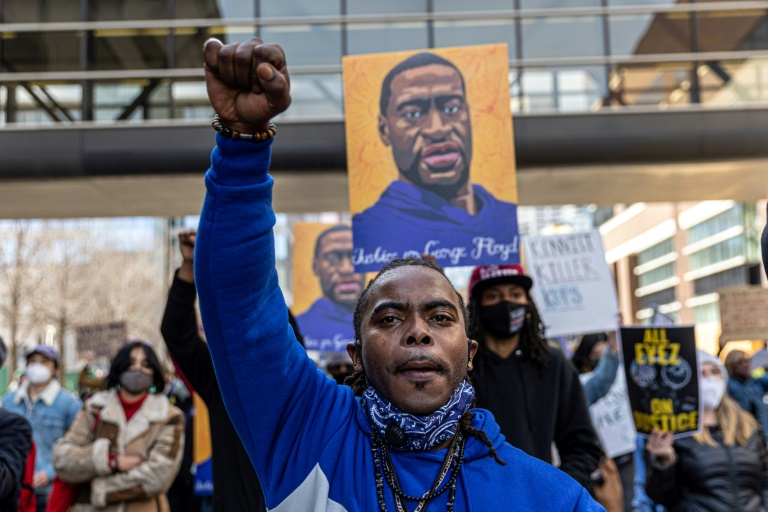 MINNEAPOLIS - The jury in the high-profile trial of the Minneapolis police officer accused of killing George Floyd was shown the stomach-churning video on Monday of the death of the 46-year-old.

"Nine minutes and 29 seconds. That's how long that went on," prosecutor Jerry Blackwell said of the amount of time Minneapolis police officer Derek Chauvin spent with his knee on Floyd's neck.

In the video, the jury could hear Floyd, handcuffed and pressed to the pavement, moaning and gasping for breath while bystanders urged Chauvin to let up.

Chauvin, dressed in a gray suit with a blue tie, was at the defense table while the video was played and took occasional notes on a yellow legal pad.

Chauvin, a 19-year veteran of the police force, is charged with murder and manslaughter and faces up to 40 years in prison if convicted of the most serious charge -- second-degree murder.

Blackwell said in his opening statement that the 44-year-old defendant was not following police procedure and acted callously.

"You will learn that on May 25 of 2020 Mr. Derek Chauvin betrayed his badge when he used excessive and unreasonable force upon the body of Mr. George Floyd," Blackwell told the jury.

"That he put his knees upon his neck and his back, grinding and crushing him, until the very breath, no ladies and gentlemen, until the very life was squeezed out of him," Blackwell said in his opening argument.

The bystander video of Floyd's death sparked protests for racial justice and against police brutality across the United States and around the world.

Chauvin's trial has become a flashpoint for the "Black Lives Matter" movement and a test of police accountability.

"The whole world is watching," said Ben Crump, a civil rights lawyer and attorney for the Floyd family ahead of opening statements.

"Today starts a landmark trial that will be a referendum on how far America has come in its quest for equality and justice for all," Crump said.

Crump and members of the Floyd family then took a knee for the amount of time Chauvin was seen on video kneeling on Floyd's neck.

Floyd's cause of death is expected to be the central issue in the case, and a key piece of evidence is likely to be the bystander-filmed video that went viral.